Everyday Photos From The Horn Of Africa 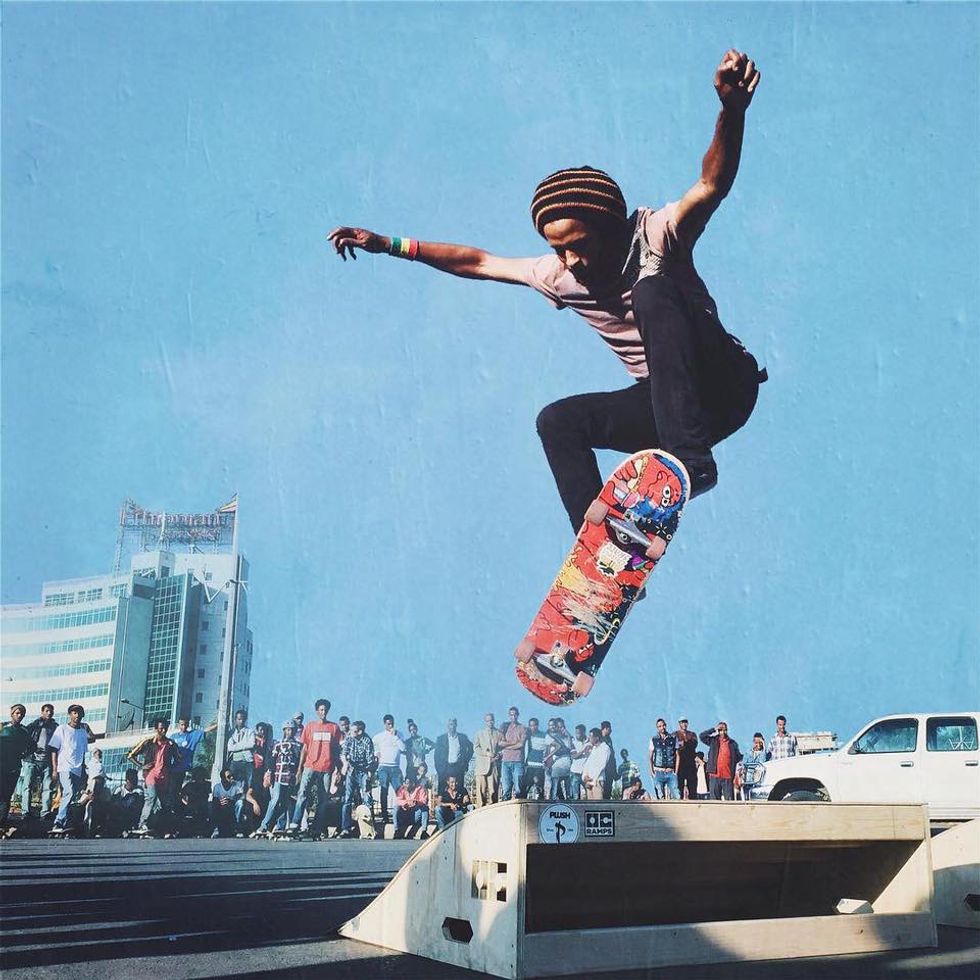 Somali artist Mustafa Saeed on how smartphones and Instagram are being used to challenge a single-narrative of the Horn of Africa.

The late Stuart Hall spent most of his years articulating the ways in which mass-mediated depictions transform ideologies and imageries of specific races, cultures and locations outside of the western hemisphere. In his 1995 piece, The Whites of Their Eyes, he coined the phrase inferential racism: “I mean those apparently naturalized representations of events and situations relating to race, whether ‘factual’ or ‘fictional,’ which have racist premises and propositions inscribed in them as a set of unquestioned assumptions.”

Images and inscriptions of Africa in Western media over the decades have done just this: crafting an entire continent as sharing a similar narrative, without nuance, of poverty, conflict and turmoil, or a location perpetually dependent on Western resources.

In the late 1980s and early 1990s, Somalia’s civil war flooded Western media, particularly after the United Nations operation in Somalia, when US “peacekeepers” were sent to the east African nation to intervene in the “lawless” and “famine-stricken” state. By 1993, the country was deemed a failed state. Poverty, piracy, drought, and conflicts on international waters would eventually become some of the dominant narratives associated with country at the Horn of Africa for the decades to follow.

That is precisely why it has become important for Somali locals, such as Mustafa Saeed, to formulate projects to instigate a counter-narrative of his home country. But Mustafa wasn’t alone. The young photographer found himself amongst other artists situated across the Horn of Africa with the same goal: attempting to dismantle long-withstanding dominant visuals of their home country. With the usage of a few smartphones and Instagram, Saeed and his team have crafted a project that attempts to challenge a single-narrative through Everyday Horn of Africa. We speak with the artist below.

Okayafrica: What is Everyday Horn of Africa?

Mustafa Saeed: It’s a photographic project, inspired by Everyday Africa and the other Everyday projects on Instagram. So far we are nine different photographers who reside in Ethiopia, Somalia, Somaliland, and we’re hoping to soon feature other photographers in Djibouti and Eritrea.

What sparked the creation of this project?

It was the fruits of a chat I was having with Michael Fassil on Facebook, a graphic designer and photographer from Addis Ababa. It was a couple of weeks ago when we were talking about starting something similar to Everyday Africa by creating a network of different photographers working or living in the Horn of Africa. We wanted to share the daily lives of these cities that these photographers reside in.

What resulted from this conversation to lead to the final product?

We reached out to Peter DiCampo, who is a co-founder of the Everyday Africa project, and he really helped us by giving tips of how to start such a project. Then we reached out to the photographers we know who were willing to contribute to the feed.

What camera is used to take these photos?

Different cameras, but mostly smartphones. We thought of not having any restrictions about camera types, because the stories and the sharing attempt is more important, I guess.

Why is this photographic depiction of the Horn of Africa so important?

Media tends to show always what’s on the surface, without digging deeper to show the real essence of life in this part of the world we live in. So a good representation through this kind of project might break the stereotype cycle we see in the mass media about the horn of Africa.

What other counter images of the Horn do you see online?

Not much, which is always politics related stories and such. When it comes to highlighting stories of the continent, other areas, other than the Horn, are always showcased. We hope we will be able to contribute in a small way, at the least.

What do you hope Everyday Horn of Africa will achieve?

We will continue sharing stories from the Horn. As individuals in this age, we all tend to share our daily life and things we see wherever we are through the use of Instagram. Why not share it in an organized way while sharing the random faces and activities we encounter through this online platform? We hope this will be an educational attempt to highlight the region in the better way we think it deserves, rather than the perspective that the international media always gives.

A photo posted by Everyday Horn of Africa (@everydayhornofafrica) on Feb 2, 2016 at 1:31pm PST

Christmas Vibes in Merakto, Addisbaba, presumably the largest market in Africa. A young men sells Christmas trees and decorations hanging on a minibus on the side of a street. Even though two weeks are still left for Ethiopian Christmas, the market seemed very much active. These past few years, an inclination to celebrate both the European and Ethiopian Christmas has been shown especially in the higher class society living in the capital. Photo by Maile Tadese @maile_tadese #MaileTadese #EverydayHornOfAfrica #AddisAbaba #Ethiopia #Addis #EverydayEverywhere #EverydayAfrica #lategram #iphonography

Althblageyen, Is an Islamist group of Ahlu Sunna dedicated themselves to call gentle persuasion and asceticism in the world and their style depends on emotional impact. Traveling for long distances through towns and cities. It began in India, and now deployed in most of the islamic countries. Photo by Mustafa Saeed @themustafasaeed #MustafaSaeed #EverydayHornOfAfrica #SheikhMountain #Sheikh #Somaliland #EverydayAfrica #EverydayEverywhere #My252 #DailyLife

I stopped by Bole today and I witnessed that they've completed the graffiti work in there. It doesn't look so perfect but it somehow ignites an artistic feeling in the passerby. Photo by Maile Tadese @maile_tadese #MaileTadese #EverydayHornOfAfrica #AddisAbaba #Ethiopia #Addis #streetphotography #EverydayEverywhere #EverydayAfrica #iphone

"No matter what is going in my country I will keep doing my job, and I will not take a gun" Photo by Zahra Qorane @zahraqoranne #ZahraQoranne #EverydayHornOfAfrica #mogadishu #somalia #EverydayEverywhere #EverydayAfrica #my252 #DailyLife #Goats A photo posted by Everyday Horn of Africa (@everydayhornofafrica) on Dec 19, 2015 at 12:15pm PST

Zerihun, deaf by birth, Civil Engineering student in Addis Ababa University. He stays in the university dormitory and spend most of his time in the Campus. Like many young deaf in Ethiopia, Zerihun thinks that deaf people are living in some sort of isolation. Photo by Nader Adem @naderphoto #NaderAdem #EverydayHornofAfrica #EverydayEverywhere #AddisAbaba #Addis #Ethiopia #everydayafrica #everydayAddis #myCity #streetPhotography #naderphoto A photo posted by Everyday Horn of Africa (@everydayhornofafrica) on Dec 8, 2015 at 8:21pm PST

A photo posted by Everyday Horn of Africa (@everydayhornofafrica) on Dec 5, 2015 at 2:22pm PST

Listening to music from an outdoor speakers of a local studio, where young boys and girls buy somali mixtapes, while hanging out in the market on the weekend, in Borama. Photo by Mustafa Saeed @themustafasaeed #MustafaSaeed #Everydayhornofafrica #EverydayEverywhere #EverydayAfrica #Borama #Somaliland #DailyAfrica #DailyLife #My252 #iphone #SomaliMusic A photo posted by Everyday Horn of Africa (@everydayhornofafrica) on Nov 25, 2015 at 10:29am PST

Today's Great Run was a farewell to the great Ethiopian Athlete Haile Gebreselassie. It is known that, Haile, a distance runner from Ethiopia, has broken 27 world records in his 25 years career. He also won the first Great Ethiopian Run race in 2001 and today, after 15 years repeated that history by running bare foot. Since this is the end of Haile's beautiful journey as a runner, printed face masks of his portraits were being sold on the street this morning :) (Great Ethiopian Run happens every year in November starting from 2001. Over 40,000 people are believed to have participated in the 10km run that took place in Addisababa today.) Photo by Maile Tadese @maile_tadese #MaileTadese #EverydayHornOfAfrica #HaileGebreselassie #Everydayaddis #everydayethiopia #AddisAbaba #Ethiopia #everydayeverywhere #everydayafrica #regramtheweekend Im Maile Tadese a Documentary Photography based in Addis Ababa, Ethiopia.

"Finally the most important step of my life started with a beautiful soulmate" Jibril said. The bride and groom brought their families from different cities far east and far west of Somaliland to celebrate with them in the capital with their friends. Photo by Mustafa Saeed @themustafasaeed #MustafaSaeed . #EverydayHornOfAfrica #EverydayAfrica #EverydayEverywhere #Hargeisa #Somaliland #SomaliWedding #DailyLife #DailyAfrica A photo posted by Everyday Horn of Africa (@everydayhornofafrica) on Nov 13, 2015 at 7:03am PST

A photo posted by Everyday Horn of Africa (@everydayhornofafrica) on Nov 1, 2015 at 1:19pm PST

At 'Seraha' park where youth and families go to spend their afternoons on weekends in Borama, Somaliland. Photo by Mustafa Saeed @themustafasaeed #MustafaSaeed #EverydayHornOfAfrica #everydayeverywhere #Borama #Somaliland #Dailylife #dailyafrica A photo posted by Everyday Horn of Africa (@everydayhornofafrica) on Oct 3, 2015 at 3:14pm PDT

Students escaping the heat of Dire Dawa, Ethiopia's second largest city. The city is located in the east of the country and was founded in 1902 after the Addis Ababa–Djibouti railway reached the area. #EverydayHornOfAfrica #EverydayEverywhere #DireDawa #Ethiopia Photo by Philipp Schütz @philippschutz #philippschutz. He is a designer and photographer based in Addis Ababa, Ethiopia.

Huda Hassan is a Somali-Canadian writer based in Toronto that can be found on Twitter at @_hudahassan.