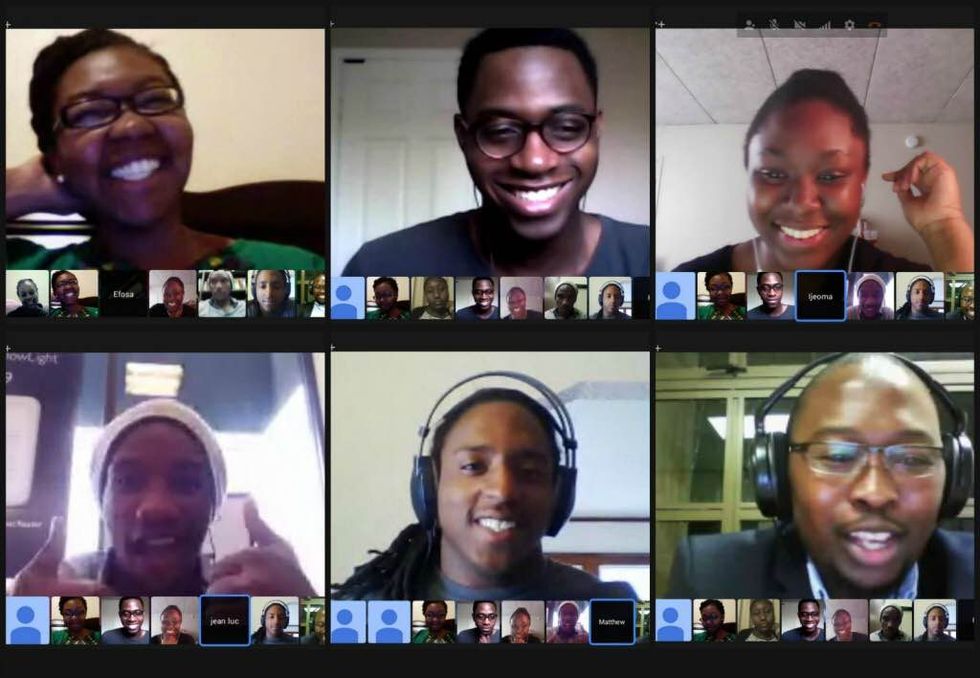 Once a Tumblr page, Ezibota.com is now a budding online space for Africans to have honest conversations.

“Ravings of a Mad, Broke Returnee” is one of Ezibota’s most viewed posts. Written by contributor Lambert Akwa, the story chronicles Akwa’s return from London to his hometown of Accra, Ghana. He writes:

Fast-forward almost four years down the line since I returned to Ghana, and I have experienced every emotion that can be associated with the big move back. I have experienced the joys, the sense of fulfillment, the big breaks, the frustrations, and the anger, all of it. All of which have finally led me to question why on earth I came back!

Since his introductory post last May, Akwa has written about everything from how fried plantain doesn’t taste the same in London to being stuck on a highway in Ghana with only GHC 30 and a car that would not start.

“Ezibota provides a great network and support system, which gives you a certain level of comfort. So there’s no reason to feel wary about sharing personal things,” Akwa tells Okayafrica.

In August of 2014, Beulah Osueke, 26, and Deana Bolumbu, 25, started Ezibota.com, a multifunctional media platform serving over 200 members from various African countries living all over the world.

“Beulah and Deana have hit home with the fact that Ezibota is a community and they want to create that sense of community globally, so as contributors for the site our posts reflect that,” Akwa says about the founders.

Ezibota’s users aren't too different from Akwa, Osueke or Bolumbu. All three are young, African, and patrons of social media—all three of the characteristics that informed the need for a platform like Ezibota.

“I don’t want to limit us to just an editorial or social media platform,” Bolumbu says over video chat. “I think it's a cultural experience in the sense that you can come here, and you can have a piece of home, or you can feel safe enough to share your personal experiences.”

Whether it’s the popularization of African immigrant literature, what it means to be African and a feminist or the grueling journey of returning to the motherland, Ezibota’s users debate and discuss through discussion boards, community chats, known as Ezi Chats and featured articles like Akwa’s.

The website, which acts as a hybrid of a social media platform and an editorial site, encourages users to build sustained and personal relationships with each other, and similar to the interconnectedness of #BlackTwitter, Ezibota users discuss a range topics with an African frame of reference.

“Ezibota reminds me of how the community comes together back home,” Mariamawit Tadesse says via the site’s private messaging service.

“It is the online version of what our ancestors have done for millennia,” she continues. According to her profile, Tadesse has been an active user of Ezibota since August 2015.

Osueke founded the site, which initially began in 2011 as a Tumblr called Rise Africa, as a response to the singular depictions of Africa and Africans that she encountered on the internet.

“Today, there’s a tremendous amount of positive imagery for Africa and the African Diaspora. But in 2011, Tumblr was actually the hotbed for black images, because that’s when Twitter just started getting popular,” Osueke says.

“I wanted to provide a space online solely for people to express their frustrations. Their frustrations about despair and issues of corruption, but also their hopes and dreams and joys.”

In a little over two years, traffic to the blog peaked at over 800 page views a day and editorial content was being produced by a team of 25 contributors from around the world. The growth of Rise Africa inspired Ezibota, which grew out of Osueke and Bolumbu’s realization that there were Africans looking to connect, but there was no platform that satisfied their needs in the way they envisioned.

“Our community was asking for more,” Osueke says. "They were like this is great content, we love it. Can we have more?”

In many ways, Ezibota exemplifies the many triumphs of social media, the immediacy with which we can connect with those far away, the sense of belonging that this perceived proximity fosters and the agency that comes with self-publishing content. But Osueke and Bolumbu want potential users to know that there is a difference between Ezibota and the other social platforms we’ve become accustomed to.

“Ezibota is more of a community because it's like your local cultural center or your local library,” Bolumbu tells us.

One of the most prominent differences is the lack of advertising on the website. Currently, the site offers members an opportunity to forgo a host website and encourages them to house their content on the Ezibota platform for a fee.

Unlike the exhibitionist nature of Instagram or the rambunctiousness of Twitter, Ezibota is more interested in building a communal platform that feels personal for all of its users. When asked what about the site keeps her coming back, user Hetile Mabunda says it is the “idea of connecting with other young black people around the globe and talking about our experiences.”

“I have left Twitter and Instagram because I feel I can't be authentic on those platforms,” Mabunda continues.

For Ezibota users, engagement and participation are expected of all its members. As the site notes, users voices are not only heard, but are demanded; their stories are not only told, they are cherished; community is not only welcomed, it is expected.