Faarrow on the Meaning Behind 'Lost,' Growing Spiritually and Redefining Success 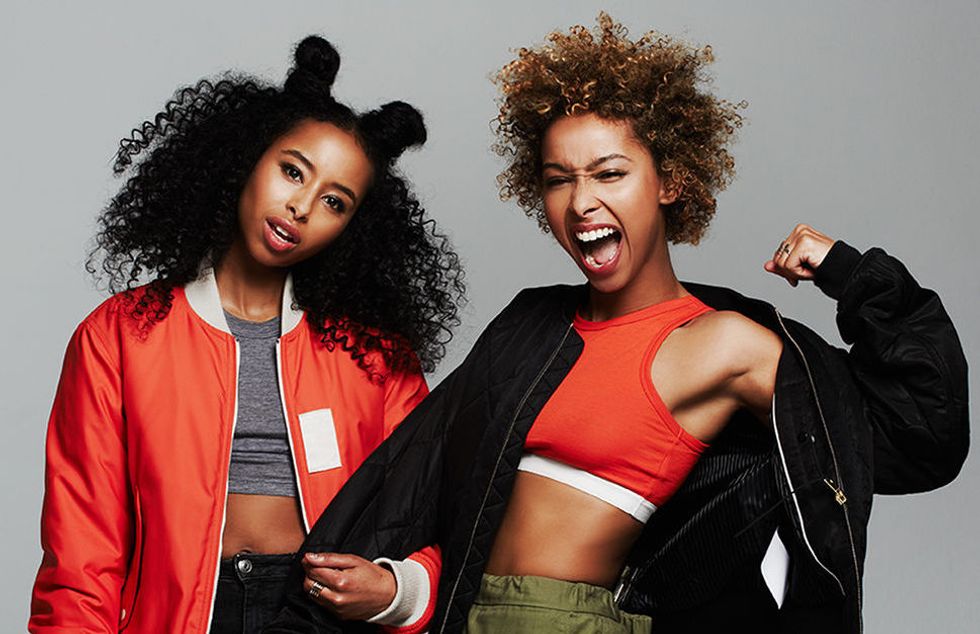 As part of OkayAfrica's 100 Women series, we spoke with Somali-Canadian duo, Faarrow, about self-discovery through music.

It’s easy to forget that Somalia’s premier pop group, Faarrow, is made up of two, tenacious former refugees: Iman and Siham Hashi. The talented pair landed in Canada as kids to escape the war in Somalia in the 1990s, but they are now based in Los Angeles.

These days, the Warner Bros signees are belting empowering tunes on their six-track EP, Lost, which could very well be the soundtrack for anyone who is on the path to self-discovery. After a few years of refining their sound, learning necessary life lessons and reassessing their goals, Faarrow is back to basics with heartfelt lyrics on danceable tracks.

The #OKAY100WOMEN honorees spoke to OkayAfrica earlier this month on International Women’s Day.

Josephine Opar for OkayAfrica: What are you both thankful for?

Iman: Recently, we’ve been very thankful for our peace of mind. Being artists, we know that to create our best music, and to be our best selves, we need to have peace of mind.

Siham: Also, just grateful for our spiritual growth. I know a lot of people aren’t really talking about that, but I feel like this journey is very spiritual. There are so many things that you are dealing with on a daily basis, all this uncertainty, it can get you off track. If you’re not spiritually aligned, there so many holes you can dig for yourself.

What did the 3 year “hiatus” teach you about yourselves as artists and women?

Iman: I guess from the outside looking in, it seems like this “hiatus,” but behind the scenes, we were working with all these big producers trying to create our sound and so many things fell apart behind the scenes. Through that, we learned that we didn’t really care about [working with] big names and being attached to all these things. We were like, you know, we’re coming back to the music and just doing what we love and just working with talented musicians.

How has your mother impacted your lives?

Siham: We are the people we are today because of our mother. She used to work for the Somali embassy, before the war, and she was in charge of approving visas and she saved so many lives. She’s such a community leader [in Toronto]. She’s always going out of her way to help people, and she’s always provided for because of that. Growing up, we never felt like we didn’t have enough money, or we didn’t have enough of anything.

Iman: Our mom taught us that you never lose by giving.

What advice would you give any young women who look up to you and emulate your careers?

Siham: I would tell a new young artist, something we wish someone would have told us when we were starting out, is always listen to your own voice. Listen to that inner voice. Whether you are in the recording booth, and you’re singing, or in a meeting, whatever the case is in the industry, you have to listen to yourself because you’re going to find yourself in a place where you have all these people around you who think they know what’s best for you but truly, you always know what’s best for you and—

Iman: Your own voice gets drowned out.

Siham: Your own voice gets drowned out—I’m speaking from personal experience—where literally you can’t even sing the way you want to in the recording booth because there’s so much in your mind about how you’re supposed to sound. Always listen to your own voice, and you have to do it the way you want. That’s a real artist, being unapologetically your true self.

"If you’re not spiritually aligned, there so many holes you can dig for yourself."

What are your top self-care tips?

Iman: [For body], drinking a lot of water and making sure what we eat is right, we are vegans—not saying everyone has to be vegans, but we are. For mind, taking a mental break throughout the day. Whether you’re at work, at the studio, you have to take your “me time” where you just slow down your thoughts and take care of your mind.

For your soul, for your spirit, you’ve got to do something that makes you excited and happy. For us it’s music. Singing and dancing, and doing [artistic things]—that gets us inspired.

Siham: Really analyzing the people in your life, and seeing who is there that no longer serves and grows you. We had so many friends who we had so much history with, we love them, but if they are toxic to you presently, history doesn’t matter. You gotta take care of you and sometimes we’re not taught to take care of ourselves first, we’re taught to serve everyone else first...To summarize, choose the people you want around you and for the people who no longer serve you, walk away with love.

I guess on a skincare tip, maybe three, four times a week, we’ve both been getting aloe vera leaf and putting on our face at night. When we wake up our skin is soft and smooth and glowing.

What’s your favorite song on the EP and why?

Siham: My favorite song on the EP is “Chasing Highs”—it was me, Iman and our producer (Elijah Kelley) wrote it together but we all had three different things of how it related to us. I love that, that everyone could interpret it in their own way. Chasing highs could be chasing a specific relationship or chasing money; it could be chasing so many things that at the end of the day, if you’re chasing something, that means you’re lacking something within you.

Ultimately, I think that’s the song I relate to the most because lately we’ve just really been connecting what we project and why we’re projecting it, and how it relates to us and what we need to heal within ourselves.

Iman: I have so many favorites, but I guess I’ll go with the title track. We called our EP “Lost” and that was a song we wrote from our hearts because everybody can relate to the fact that if you are an artist, or in a creative field, most likely you’re called lost until you’re “successful.” People define success in different ways. I define success so differently than I did we started in the industry. I believe success is true happiness and being aligned with what you’re doing. Don’t call me lost, that’s what we’re saying in the song, just because I’m on this journey doesn’t mean I’m lost.

How do you keep yourself motivated and feeling confident in the face of rejection or doubt?

Iman: It’s funny because a lot of times, with anybody who is doing anything creative, they get it a lot from their family first. I feel like when your family doesn’t understand you, I think that’s what really gets people. My advice to those people is, your family loves you, they’re not going anywhere. Even if they think what you’re doing is not going to make money, whatever it is, at the end of the day, if you love what you do and you are someone who is completely in love and aligned and passionate. How can anyone stop that? There are so many people searching for passion and their purpose.

What are your thoughts on the anti-immigrant/refugee sentiment in the U.S. and other parts of the world right now?

Siham: We’re actually going to be performing at the ContraBanned show at SXSW on March 17, which is directly talking about the Trump ban and the show is highlighting artists from seven banned countries. As artists, we obviously never want to be political. The way that politics is, especially in America right now, it’s so confusing, it’s not based on facts, and I think it’s distracting and confusing by design. So, this whole Trump ban literally makes no sense. Most refugees are women and children who have nothing to do with that. The entire thing reeks of fearmongering and an alternative agenda. We really try not to hold that in our spirit because it keeps you in fear and I choose love, every time.

Iman: For us, we’ve been speaking out on refugee issues for a while now. We just felt like, how could we not talk about it? For us, even though, this fear got heightened, our spirit remained the same, which is just [to] spread love. I know there are certain people who are in worse situations. For us, as artists, we just have to continue being a voice and use it through music, through platforms. Even this interview right now, we are all doing our parts as best we can.

Can you speak about your involvement with the headphones you were modeling on Instagram?

Siham: So it’s for i.am +, we are doing a campaign for the buttons, the new headphones, you can find them at the Apple Store. It was really a chance for us to tell our story. We got to creative direct [the shoot]. We’re really narrating who we are, what it means to be an artist, we are really just excited to get opportunities from different brands to be us, to be our authentic selves, tell our story and let our music be heard.

Anything you’d love to add?