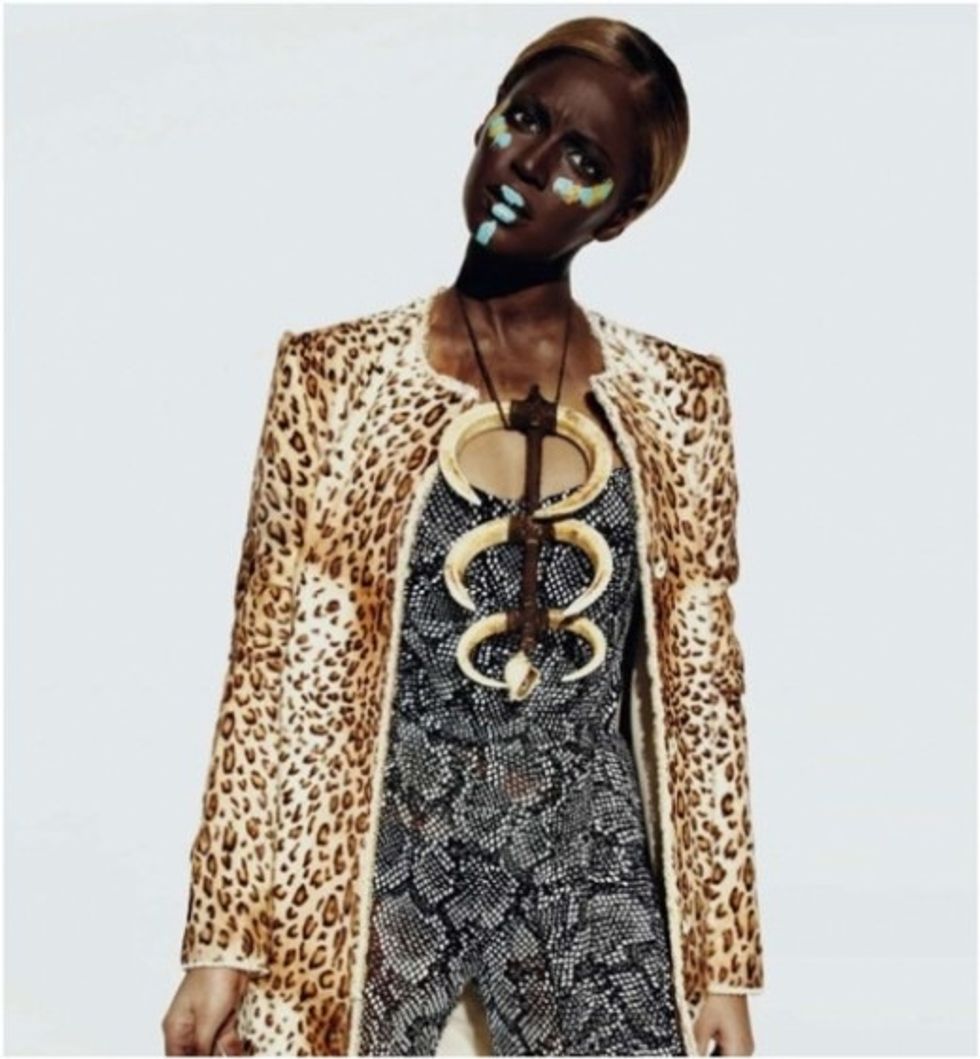 This is a piece highlighting the fashion industry's behavior on dark-skinned people and the impacts of it.

We must talk about the discrimination underlying our dear fashion industry.  It's not unusual in the fashion industry to see very young models setting standards of attractiveness for older women. It's also normal to witness the use of extremely skinny models, male or female, while the debate continues in the media regarding the harmful messages about appearance that fashion spreads to the world. It's also easy to realize that African-American, Hispanic, Asian, and other racially diverse models are seriously under-represented across the industry.

In 2008, Vogue Italia published the "Black Issue," a beautiful overview that featured models of color from past to present. The magazine sold out in the United States and Great Britain within 72 hours.  The issue clearly challenged deeply entrenched views towards models of color under the fashion spotlight. Our question is: was it only a trend? During the last New York Fashion Week held at Lincoln Center in February 2013, 82% of the models were white. This is a heartbreaking and gut-wrenching reminder that nothing has really changed.

A lack of diversity serves as no enrichment to society. Fashion has a real impact on millions, we shouldn't deny the fashion industry's unequivocal influence on society and culture. Through mainstream fashion and mass media, companies and designers influence the general public by dictating the way forward. Unfortunately, the agendas of these big institutions and media corporations remain fresh on a subliminal level in people's minds by encouraging fears and dysfunctions. While media dictates the cultural taste, fair-skinned people are over-represented as a gold standard of physical attractiveness. The whole industry is leaning on these icons of beauty while failing to reflect a fair picture of international and cultural ideals.

Basing ideals on this Eurocentric image is conforming to a narrow image of beauty. This leads to unavoidable consequences: unworthiness, self-hatred, shame, humiliation, rejection, and plastic surgery, among others. Although few black models are represented, the most successful will be those with less "Black" and more European features. Unfortunately, dark-skinned women, predominately "Black in their facial features are often second choice or left out for light-skinned women. Race can be the most harmful thing and the issue has adverse affects on our colorful world.

That is the inspiration for the documentary "Dark Girls," by directors/producers D. Channsin Berry and Bill Duke, highlighting the great suffering and rich legacy of dark-skinned women outside of and within black American culture. Being an Afropean — African woman raised in Europe - I didn't experience that silent discrimination between Black people and was truly moved by the documentary and testimonies gathered from everyday America. Berry and Duke showed a strong awareness and recognition of deep impact of skin-tone.

Duke, talking about a scene in the film, said: “In the late 60s a famous psychological study was done in which a young black girl was presented with a set of dolls. Every time she was asked to point to the one that wasn’t pretty, smart, etc., she pointed to the black doll that looked just like her. In her mind, she was inferior. To watch her do that was heartbreaking and infuriating. CNN did the test again recently — decades later — with little progress. As the filmmakers behind Dark Girls, our goal is to take that little girl’s finger off that doll.”

1 in 5 black girls reportedly cause injurious harm to themselves trying to lighten their complexion. According to Wikipedia, "Skin whitening, skin lightening and skin bleaching refers to the practice of using chemical substances in an attempt to lighten skin tone or provide an even skin complexion by lessening the concentration of melanin."  Skin lightening creams, injections and treatments are readily available on the market for a wide range of prices. The side effects of those products? Blood pressure, skin burns, skin cancer, ochronosis, and skin damage. In addition, many creams contain steroids and some of them contain mercury, which can damage your nervous system.

In the continent, several countries including South Africa, Nigeria and Ghana have seen a rise in its middle class over the last decade due to U.S. and Chinese investments. This has increased the impact of racist colonialism. In order to deal with feelings of self-hatred and a desire to be "beautiful," the use of bleaching cosmetics has become more common. Last year, a campaign for a new skin-lightening cream called Khess Petch — meaning "all-white" in Wolof, the national Senegalese language, appeared and provoked a strong reaction amongst the Senegalese and international community. The product promoted a 15-day fast skin-lightening. Many people reacted to stop the advert and Aisha Deme, an online events manager based in Dakar, started a protest campaign called Nuul Kukk — which means "pitch black" in Wolof.

Deme attracted thousands of supporters on Facebook, including actress Awa Sene Sarr and rapper Awadi. Senegalese Health Minister Eva Marie Coll Seck showed her support for the campaign. Deme stated, "Society is constantly telling us that fair-skinned women are beautiful — in the media, on TV — and Senegalese women have started to believe it, so we want to show that dark-skinned women are really beautiful and that natural black skin should be celebrated." According to critics, a tube of Khess Petch was deliberately cheap  in order to target women who have no idea of the danger of this kind of product.  One Khess Petch tube is 1000 CFA Francs which is equivalent approximatively to 2 dollars.

"There are expensive face-lightening creams which are less dangerous but products like Khess Petch are very cheap and very dangerous — they are deliberately targeted at women in the villages and the poor urban areas. Even when they discover the side-effects and want to stop using the creams, they find they cannot stop. It's only when you stop that the skin changes and begins to become completely burned."

Now, through fashion and beauty, we're constantly witnessesing a process of "white-washing." Publications are lightening model and celebrity skin tones to conform to that ideal of beauty by making a person look lighter through photoshop. It's been reported many times yet magazines always find a way to get around the accusations. Most of time you can see it straight away. Some of the magazines who were questioned used the excuse of lighting, others claimed they didn't retouch any individual model more than another. The sad truth surrounds us in beauty campaigns and magazine covers which feature dark-skinned models and celebrities.

In 2011, Beyoncé darkened her skin for the 90th birthday of French magazine L'Officiel. The exclusive photo shoot, a tribute to Fela Kuti, caused a stir internationally as Beyonce appeared with her face painted with a dark brown color — it reminded most of blackface. Many people were rightfully offended, Charing Ball of the Atlanta Post said: "Blackface is not fashion forward or edgy and, in my opinion, it is just flat-out offensive." We have a long way to go and if the people who get massive media exposure don't stand for themselves and for the average citizen, who will do it?

In 1848, blackface minstrel shows were an American pass-time that allowed the worst clichés of black people to exist. They created (more) space for racist and discriminative images to be shared and distributed. After everything people of color had experienced in the past, this was yet another instance of offense and humiliation. We haven't learned from history to avoid repeating the same mistakes. In 2013, we're not sensitive enough to what surrounds us. We still tend to forget the bigger picture.

Today, I feel that we're experiencing a form of modern blackface. We desire a color that will allow us to have a better place in society and to follow a beauty ideal portrayed by the media. We stick to what we see and we forget that we are an ideal and, more importantly, WE are. Everything goes twice as fast and while we're trying to make it for ourselves, we don't realize the impact of our individual action. Now, why would we lighten our skin? Why would we darken our skin? Why would we get surgery? What would we try to fit to an ideal? I want to say: what if, instead, we stopped buying these magazines? What if we stop reporting harmful messages? What if these celebrities and well-known figures refuse for their image to be distorted and take action?

Jada Pinkett Smith once asked: "Will there ever be a day in which women will be able to see each other beyond race, class, and culture? I’m asking this question in the spirit of thinking outside of the box in order to open doors to new possibilities. I also want to make it clear that there is no finger pointing here. With love and respect to all parties involved, my question is this… if we ask our white sisters, who tend to be the guardians of the covers of mainstream magazines, to consider women of color to grace these covers, should we not offer the same consideration to white women to grace our covers?"

In early September, fashion industry veteran Bethann Hardison started the campaign Balance Diversity, speaking up about the lack of models of colors on the runway. She was joined by top model Naomi Campbell and addressed a letter to several fashion councils, denouncing individual designers and accusing them of racism.

It's time for mainstream global acceptance and a diversification of the image of beauty. By bringing more models of color, diversity would become a norm that would allow for everyone to co-exist and feel accepted. We've already been through the worst and now, it's that silent constant motion that we need to break once for good. People of all colors acknowledge progress has been made, but there's still a long way to go. By talking and spreading the word about this hidden and buried pain, we'll make a change. In this crucial debate, we must be as transparent and wide-ranging as possible to make a step forward.