#FeesMustFall: The Threat of the Penis and the Gun in South Africa’s Revolutionary Spaces 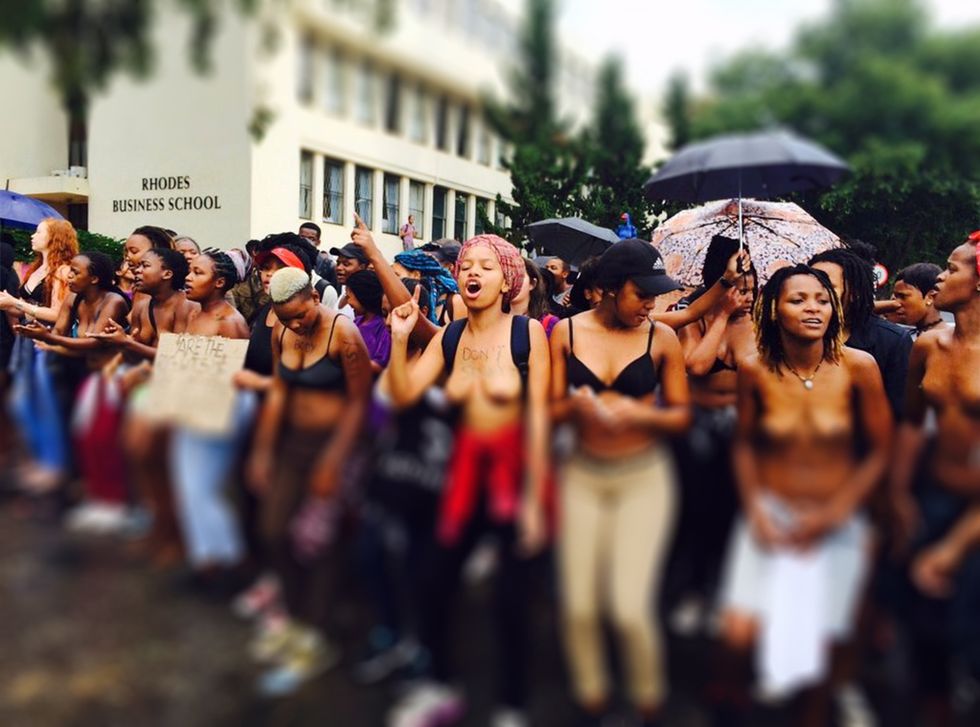 South Africa’s student protest spaces are rife with instances of sexual and physical assault, only a fraction of which have come to light.

The revolution has always been a belligerent space with so much fire and viva one can barely sleep for all the high octane energy running through your blood. Being anti-establishment is never a safe place to be. More often than not you can end up on the wrong end of a stun gun, a smoke bomb or, in the case of women and queer people in the #FeesMustFall movement, a penis. South Africa’s student protest spaces are rife with instances of sexual and physical assault, only a fraction of which have actually come to light.

One of the first cases of sexual assault to crawl from the crevices of the revolution happened in November 2015 with #RapeAtAzania. One member of the University of Cape Town leg of the movement wrote that on the 16th of November “a comrade and friend was raped at Azania (formerly part of Avenue house)” on UCT campus. The sexual assault caused outrage when it emerged that the accused, a 24-year-old student from Lesotho, “forced his fingers into the vagina of another Rhodes Must Fall protestor.” This all came to light in a (since-deleted) Facebook post where the woman exposed the incident, saying: “I was sleeping and then I wake up to feel fingers up my vagina.” UCT administration attempted to sidestep the issue by downgrading the incident from a rape to a sexual assault because according to “institutional policy” a rape has occurred only if a penis has penetrated a vagina.

We live in a society that normalizes rape. Where rapists get away. Students at UCT aren't having it! #RapeAtAzaniapic.twitter.com/f9sxJkkGl2

Following the #RapeAtAzania incident an internal meeting was held to discuss how to stem hyper and violent masculinity. One man responded that “women should watch their dress code.”

Often the victims of sexual assault are told to remain silent in the name of the revolution. In a number of cases women and gay men have been sexually violated by movement leaders only for it to be swept under the carpet because those within the struggle are said to be in the middle of “important dismantling work” that cannot be detracted from.

Thenjiwe Mswane, a key protester within the #FeesMustFall movement, tells me of the experiences of herself and other women within these politically charged spaces. She says that despite the feeling of being ‘on the same team’ there are a number of ways in which being a black woman in a predominantly black male space can be wildly dangerous. Mswane emphasises this: “When black female bodies [are] going into spaces that are predominantly black male spaces there isn’t [ever] a sense of being completely safe.”

The space is even more grossly violent against queer bodies. She recalls how she knew of a black gay man who had been sexually assaulted by another man who was a student leader. This was not an isolated case. In fact, the violation of non-heterosexual male bodies is something that happens continuously within these spaces of student protest.

Mswane explains this as a problem of understanding different factions and identities within movements outside, or in the case of #FeesMustFall, black people who feel black pain. In other words: it was all very well and good to understand that the world can be a tar pit of despair when experiencing it as a black person, but what of experiencing it as a black woman? Or a black queer person? Or a black trans person?

Chumani Maxwele, identified as one of the catalysts of the movement, found himself under fire after images appeared of him physically assaulting fellow fees must faller Mswane and calling her stabane (a derogatory term for homosexual). The altercation followed a secret meeting held by members of #FeesMustFall. The meeting, which took place at an undisclosed location in Johannesburg, was decried as a boys club with few to no women in attendance––this all despite the fact that women have been the backbone of the movement. This sidelining was coupled with factions within the #FeesMustFall collective publicly identifying Maxwele a rapist and labelling him as a violent man. The UCT Trans Collective was essentially shut down when they tried to call Maxwele out on his destructive behaviour.

A great piece that speaks to the violence within the higher echelons of power is Fezokuhle Mthonti’s A Rapist State’s Children: Jacob Zuma & Chumani Maxwele, which calls Maxwele’s particular brand of leadership “bigoted and patriarchal.” Mthonti describes Maxwele’s politics as “anti-LBGBTIQ and anti-women,” which has left women, especially queer women, extremely vulnerable and the current surge of student revolution morphing into what is termed by some protestors as “big man politics.”

More recently, some are starting to take a stand against rape culture within the movement. In April, a group of women enacted a series of public naked protests following the release of a list of sexual predators at the Rhodes University known as the #RUReferenceList. A group of Wits students, marching under the banner #Iam1in3, soon joined their peers at Rhodes in solidarity.

The most powerful photos in 2016. The students are tired & can't take it anymore #NakedProtests#RUReferenceList ? pic.twitter.com/8nQ4R0nd9L

But as women carried on the fight against rape culture and other oppressions, some men within the movement failed to see the anti-rape protests for what it was. Mswane spoke of how some men told women who took part in the naked protest to “take pictures if they too were going to be nude.”

One of the key problems with the pushback against a lack of intersectionality, Mswane says, is that there are strong attempts at silencing women and queer people behind closed doors after their bodies have been used to make up the numbers. As women and queer bodies ask for their place and their identity to be acknowledged, those who do not want to hear it push back in toxic and dangerous ways.

With university policies tending to favour the perpetrators, those who experience sexual assault have had to take time out from being anti-white supremacy, anti-ivory tower and anti-establishment to protest sexual assault within their own spaces. It becomes a case of who are we as black women really fighting: white supremacy or the man toyi toying beside us fighting the exact same thing?