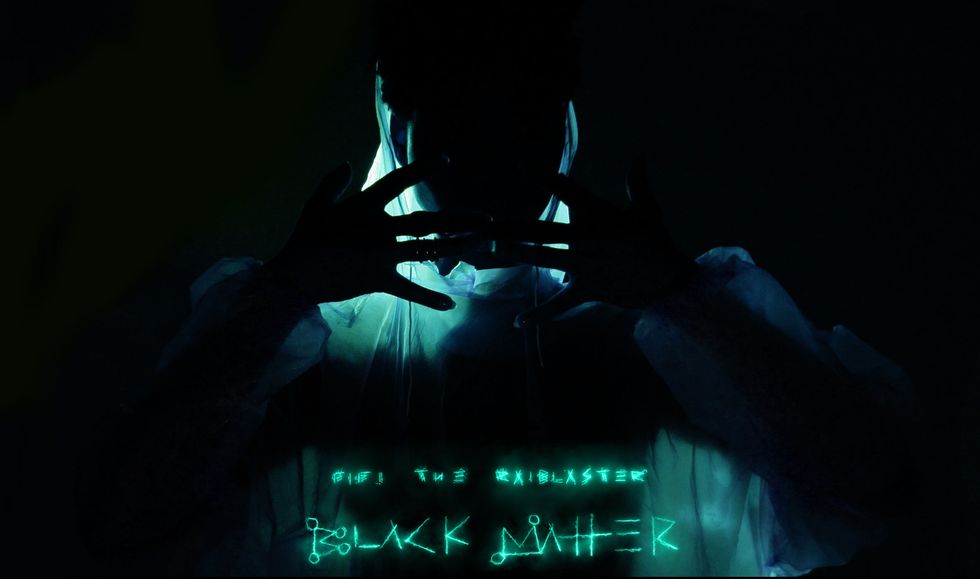 The themes Fifi The RaiBlaster covers on 'Black Matter' range from astronomy, astrology, mythology and history.

South African singer Fifi The RaiBlaster’s latest album, Black Matter, is a journey into realms that you and I aren’t familiar with.

“The concept of the album is outer space,” she says while sitting in the Yeoville, Johannesburg studio in which she and producer Kanif The JhatMaster worked on the album. “I’m inspired by the vastness of space where you don’t see any person, any robots, or traffic, but this vast space that can swallow galaxies and galaxies... so the album is inspired by formlessness.”

The themes she covers on Black Matter range from astronomy, astrology, mythology and history. “In a way, I wanted to create my own pool of thoughts and question science,” she says. For example on a song like “ManMonkey,” the singer questions the concept of creation as we have been made to believe. “It’s things that I’ve read and question,” she says, “and I just wanted to sing about it, so that the information is out there, because it’s not like black kids are learning about it in schools.”

But Fifi’s music hasn’t always been this way. Coming up in the mid-2000s, she could easily be classified as a hip-hop soul or jazz musician. Around 2005, while still studying politics at the University of Pretoria, she was making music with the revered hip-hop producer Nyambz and the Pretoria rap group Ba4za.

She appeared on Tumi and The Volume’s self-titled 2006 debut studio album and Tumi Molekane’s debut solo album Music From My Good Eye (2006). She was 17 at the time, working with producer and deejay Kenzhero, who was hosting the then-popular event series Party People, which was a great platform for Fifi. She'd later go on to perform at the festival Oppikoppi, and release her debut EP in 2009.

Speaking on that era of her career, Fifi, who's based in Mamelodi, Pretoria, says, “It was me fresh out of high school, in varsity, and what I wanted to do was make music, which I did with Nyambz. As I was working in the studio, Kenny picked up on my sound, Tumi picked up on my sound. And that was me finding my voice. Apart from Kenny, I had so many people who were looking out for me and teaching me how the performance space works—DJ Bob, DJ Bubbles.”

Reinventing herself, she added “The RaiBlaster” to her name about four years ago after a few years of working with Iapetus Records, the label she’s currently with. Fifi fits perfectly into the mold of Iapetus—a label that prides itself in being “free from the mainstream music machine,” and has produced underground hip-hop classics such as Tha Hymphatic Thabs’ The Age Of Horus, Yugen Blakrok’s Return Of The Astrogoth, Gin-I Grindith’s Iron Tooth Monster, the late Robo The Technician’s self-titled album, among others.

“The frequency and energy of her as a human being just gelled,” says Kanif on meeting and working with Fifi. “She wanted to do a track with Thabs, which never happened but we ended up just working. I thought her voice added a unique quality to the stuff I was making. I was like, 'let’s make some songs, and if it works out, let’s work on a project.'”

The production on Black Matter is monolithic, just like most projects Kanif has produced. He’s arguably one of the best on the boards in South Africa. His use of samples is not lazy—instead of looping portions of songs, he will re-arrange the sounds he samples and process them until they're nearly unrecognizable. And then there are the low-creeping ethereal pads and sounds you could swear he sources from galaxies far from ours. His bass lines have a life of their own—awakening cosmic forces you didn’t know existed in  your soul.

“I’m into sounds,” he says. “I love recording sounds, and putting them into the music. And I like manipulating sound. I will make a break beat, and put it in the cupboard, and cover it in a pillow, mic it up, and record that back into the computer, tweak that and just see what happens. Air affects music. That’s why the most beautiful instruments are acoustic—between you and that instrument there’s air. So whenever it’s just digital, and there’s cables, it’s in the machine, it’s singularity, and it doesn’t work.”

So Black Matter is essentially a science project, which took about five years to make, as Fifi was juggling being a student and being an artist. It’s afrofuturistic from subject matter to the way it was put together. The two videos for the songs “Chasing Phases” and “Timbuktu_sirius B” show the singer as an other-worldly being floating in space—a great representation of Fifi’s head space. “The underlying narrative of Black Matter,” she says, “is of the Raiblaster character. She’s in a machine flying a sangoma. She is going to land on earth one day when she decides. I’ve decided to communicate that through my videos.”

But Fifi has her own definition of Afrofuturism. She thinks people misunderstand the concept. “I went into this space trying to find me,” she says. “So when I walk into an art gallery, I want to see a black female and her history. So for me, Afrofuturism is how I enable myself and people around me to move on—how is it that we can put Africa on the pedestal and be respected? How is it that we can tell our stories? We need to see ourselves on TV and magazines. So I feel like, a girl like me, that sees me on TV will feel like they can relate.” She sees Afrofuturism as a movement as opposed to an aesthetic. “I don’t have to be a guy with a beard and a sword in one hand, or a baby on the hip or ugly toenails.”

She makes her own rules, too. The artist normally never writes her songs to beats. Late at night she will write to crickets’ patterns and melodies. “I went in and created my melodies,” she says. “I didn’t bother about how it sounded phonetically, whether it was the right key, it was just an outpour of emotions that I was going through at the time. I went through a hectic depression. I’ve had some people who say my music is healing, so I’m hoping that they receive it the same way regardless of how I was feeling when I made it. The process was also cathartic to me as well.”

And the music on Black Matter will probably have the same effect on the listener. I personally don’t get most of the lyrics, but the melodies and the brilliant production blow my mind away. Songs like “Timbuktu_sirius B” “Stay Gray,” “Chasing Phases” and “River of Love,” among others, display a synergetic artist-producer chemistry you are highly unlikely to find anywhere else.

Stream and download Fifi The RaiBlaster's Black Matter below.