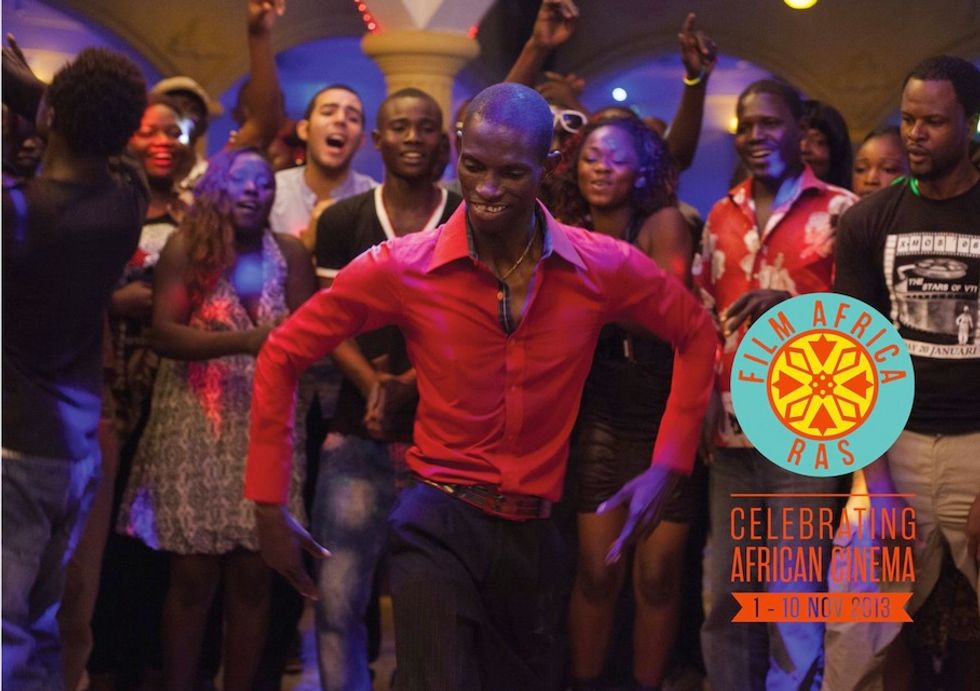 Qubeka's Lolita-Hitchockian ode to classic film noir was briefly denied a rating, and thus banned, by the South African Film and Publications Board on account that it "promotes child abuse & pornography" despite viewers reading the film as an anti-misogyny/gender-based violence narrative (the board, who it came out had seen only 28 minutes of the 109 minute-running film, ultimately reversed its decision after huge public outcry and gave the film a US equivalent 'R' rating).

We previously took note of Chadian filmmaker Mahamat Saleh Haroun's most optimistic film yet when Cannes rolled around earlier this year (Grisgris won the 2013 Vulcan Award for Best Cinematography). The French-Arabic-language film tells the story of 25 year-old Grigris who, despite a paralyzed leg, dreams of becoming a professional dancer, and, in an effort to save his ailing uncle, gets mixed up with petrol smuggling. Two other Haroun films will also be screening - Dry Season (Daratt) and A Screaming Man (Un homme qui crie)/

French/Senegalese filmmaker Alain Gomis' Dakar-set Tey is a stunning celebration of life through a narrative that begins and ends with death. Saul Williams, in a role short with words and heavy in emotion, plays the part of Senegalese returnee Satché who wakes up to the news that he'll die by the end of the day. Other Gomis films showing include L'Afrance and Andalucia.

"Musical thriller" Hoodrush is showing as a part of the series' celebration of 21 years of Nollywood. OC Ukeje and Bimbo Akintola star as popstar-aspiring brothers who enter a TV game show and thereafter are mixed up in fame's compromising world.

The dreamlike tale of a father-daughter relationship is a cinematic look (in monochromatic form) at post-colonial themes in Portuguese-speaking Africa. After 30 years of exile in Portugal, Baio returns to Guinea-Bissau for his daughter's wedding to a famous singer in musician village Tabatô. Baio's arrival is marked with resurfaced memories of the war of independence.

Forty years ago a tale was told of a young Senegalese pair's travels on the road to Paris. The experimental cult masterpiece is significant in both the narratives of African cinema as well as Senegalese history.

Come Fridays nowadays weekly procedure is talk of making plans to finally catch Nigerian filmmaker Andrew Dosunmu's follow-up to Restless City (and, potentially, pre-cursor to the Fela biopic). The toast of town Mother Of George tells the story of a Nigerian newlywed couple living in NYC whose struggles with fertility become the issue of an entire extended family.

The Senegalese odyssey is a stunningly-shot drama of a retired boat captain who agrees (reluctantly) to take a 29 man group across the Atlantic to Spain aboard a wooden pirogue boat.

Jeppe On A Friday

Filmmaker Arya Lalloo (SA) and Shannon Walsh (Canada) invited eight South African directors (all women) to make a movie about Joburg neighborhood Jeppe, all of which was to be shot in a single day. What transpired was the snapshot of the lives of five people living in a community threatened by gentrification.

The documentary/fiction hybrid tells the story of four young people in Paris suburb Saint Denis who had the chance to become reporters at 2010's World Cup in SA.

The Royal African Society's Film Africa runs from November 1st-10th. Head here for a full listing of events. Tickets to screenings can be purchased here.