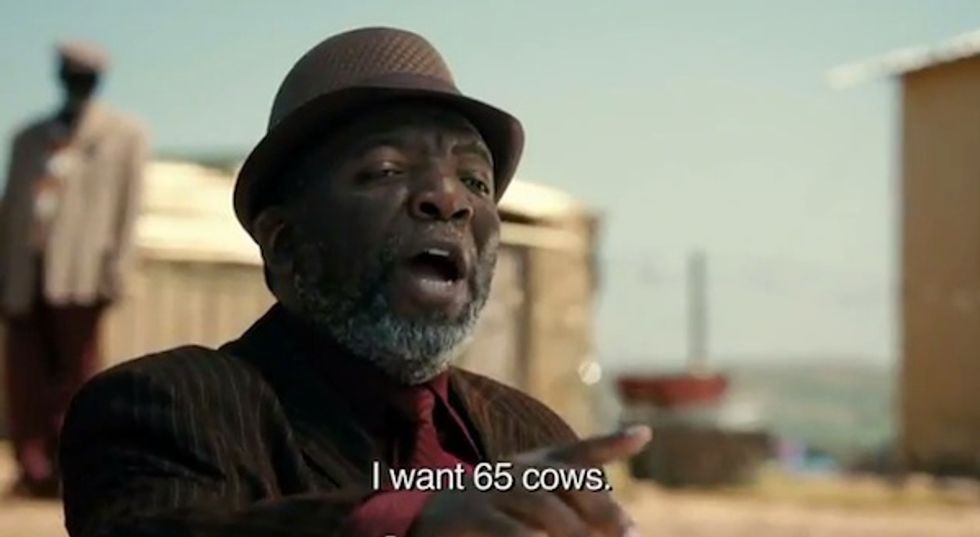 Get ready because this March a film is coming out that will either be an unprecedented exploration of race and love in South Africa — or a really uncomfortable and problematic cinematic representation of post-apartheid South Africa. We'll concede that it could also fall somewhere in between. Directed by Hank Pretorius and co-written by Janine Eser and Preotorius, Fanie Fourie's Lobola is an interracial love story that explores what happens when an Afrikaans man, Fanie (Eduan van Jaarsveld) and a Zulu girl, Dinkie (Zethu Dlomo) fall in love and have to work through the complicated process of lobola/lobolo (South African custom of bride price). The film is based on Nape à Motana's novel of the same name. Check out the trailer below:

So how do we react to this trailer? Well, like we said, it could either be amazing or a really uncomfortable viewing experience. If we solely look at the data about the prevalence of interracial relationships in South Africa, — surprise, surprise — interracial marriage is extremely rare throughout the country despite a large number of mixed heritage individuals.

From the trailer, it seems like a cute-enough romantic comedy that would be fun to watch but we're also hesitant of how the film, via the genre it's embedded in, will try to rectify and smooth over these serious and deeply ingrained understandings of race and racism in the country. We get a glimpse of this in the preview when Fanie's mother says disapprovingly "It's the Africa in her blood" to which he responds, "Africa is in my blood too." Great, but it kind of makes us dread the ending where his mother gets over the fact that she's racist just in time to embrace her son's new relationship. We think most of us can agree that things don't work out that way in the real world, but nonetheless it's a romantic comedy, and nothing about romantic comedies has anything to with reality and everything to do with fantasy. So why not dream then about happy romantic endings and love in addition to the end of racism in SA?