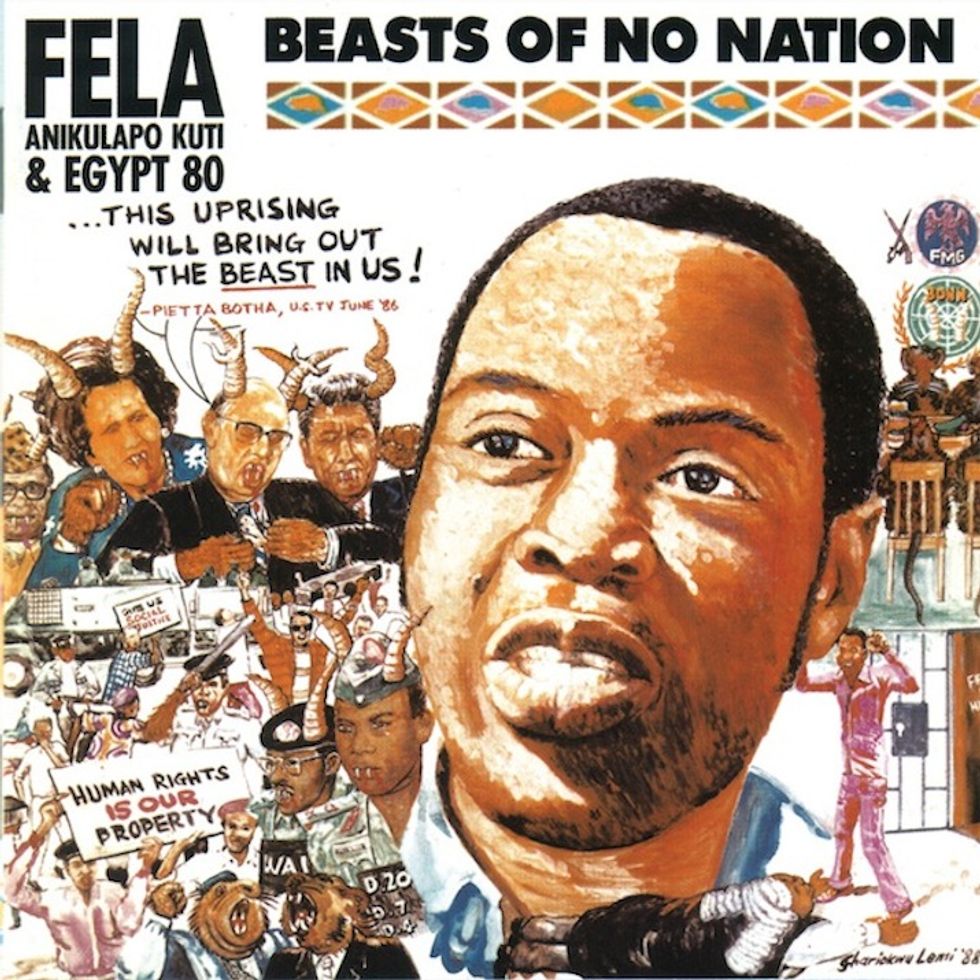 ‘Finding Fela,’ the new Fela Kuti documentary from Academy Award-winning director Alex Gibney, begins its North American theatrical run on August 1st. To celebrate we’ll be finding Fela in our Okayafrica archives with a look back at our favorite Fela-related videos, galleries, remixes, interviews and much more.

Nigerian graphic designer, fine artist and illustrator Ghariokwu Lemi occupies a unique position as the creative genius behind twenty-six of Fela's iconic album covers. Christened 'The Artist' by Kuti himself, the vivid social realism of Lemi's works created between 1974 and 1993 provided a fitting visual accompaniment to the singer's derisive anti-establishment lyrics with its cross of distorted collage, illustration and caricature.

After a chance meeting in 1974 with veteran Nigerian journalist Babatunde Harrison who was friends with Fela, a then-18 year old Ghariokwu was given the opportunity to design his first album cover for the musician. This inaugural assignment, for the authority-bashing Alagbon Close, came after Kuti's mistreatment at the hands of the Nigerian police and depicted a larger-than-life Fela breaking free from the titular jailhouse while defending his Kalakuta Republic from baton-wielding policemen. The whirlwind success of this cover placed the young self-taught artist squarely within the afrobeat legend's inner circle.

Lemi's cartoonish renderings of Kuti's lyrical indictments featured commentary on the social ills plaguing Africans due to media brainwashing and highlighted oppressive policies from corrupt governments. As the foremost visual translator of one of most outspoken musicians the world has seen, Lemi's illustrated sociocultural critiques were as confrontational as the songs they depicted. His pictorial narratives lambasted political greed, police brutality, skin bleaching, lack of basic utilities as well as scathing takedowns of those with political power.

In an interview with Okayafrica last year, Lemi shed some light on one of his most famous sleeve designs — for Fela's Beasts Of No Nation — which featured several world leaders as bloodsucking beasts with fangs and horns adding, "I have never received a negative response to date, 25 years on. I just think the art speaks for itself; one can never run away from the truth." Besides his work with Fela, the highly prolific Lemi has designed over 2000 album covers for a wide range of artists including Bob Marley, Antibalas, E.T. Mensah and Gilles Peterson and has seen his work exhibited all over the world. Watch Lemi discuss his career beginnings in the video below. Click through the gallery above for a sampling of the artist's most famous sleeve designs for Fela Kuti.