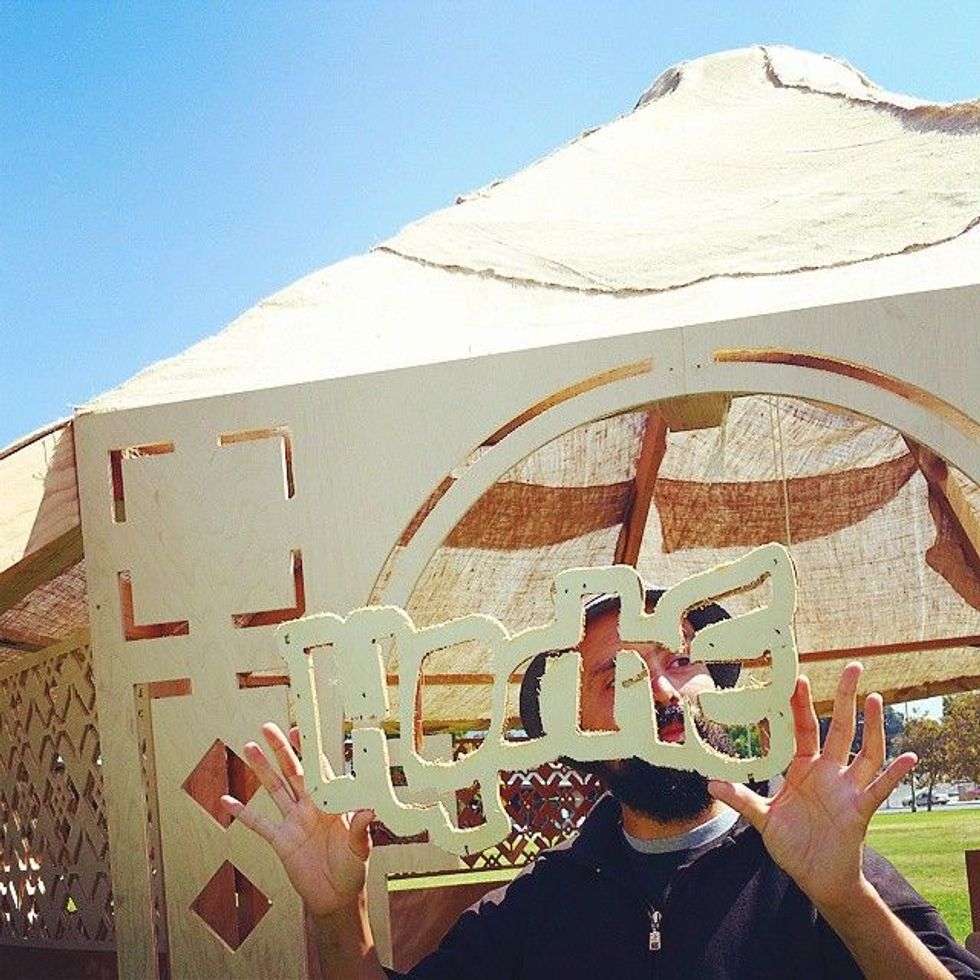 I'm sitting in Oakland, CA in the middle of a park on the corner of MacArthur and Grand, next to a gojo/adgo we built in honor of Ethiopian and Eritrean New Years and to celebrate new works of Bay Area artists who are exploring the evolving nature of "home" as it is experienced by the Ethiopian and Eritrean communities here. As a member of the Ethiopian diaspora, both my music and musical tastes have been shaped by people who live in between worlds. This playlist is a reflection of what it means to me to honor one's roots while at the same time inventing the future. Melkam addis amet, ya'll!

As far as I know, Abdul "Duke" Fakir (a founding member of The Four Tops, and the only one of the original Four that is still alive) is one of the earliest members of the Ethiopian diaspora to personally have such a deep impact on Black music from within the United States, with The Four Tops being one of the groups that helped define Motown's sound. I chose this song because of the symbolism of the lyrics when applied to Duke's story, as well as the rest of us that came after him. For connection, and for the ways we sometimes have to carry on traditions that feed our spirits, even in languages that are not our own: "it's the same old song, but with a different meaning since you've been gone."

Believe it or not, when I started making music in the late '90's, I thought I was the only Ethiopian emcee I knew of until I got an e-mail from Burntface, sometime in 2005. It blew my mind to hear the music his crew had been making in Atlanta for just as long as I had been doing my thing in Seattle, and more than that, that they were incorporating samples of Ethiopian music into the beats (before that was a thing) and they had lyrics in Amharic and Tigrinya. "Taxi Cab" is an old school Burntface track that I've always loved because of the image it paints, conversations on a taxi ride that could happen on any day. Rest In Peace Surafel.

I actually heard of Sumach aka Gonjasufi through his work with Orko Eloheim back in 2001, but I didn't learn that he had an Ethiopian/Mexican background until years later. The "descendent of Bishop Enoch Mekonnen" line on that track with Orko should of given it away. You may say his music sounds like no one else, but it sounds to me like he's channeling some of his Ethiopian ancestors on tracks like these. Blessing them with these testaments.

Meklit, "We Are Alive"

Since it is New Years, here is something brand new from my brilliant and talented cousin Meklit! A creative, fun video released earlier this week for the title track of her latest album We Are Alive. We didn't grow up knowing we had a musical family, I actually didn't even know Meklit sang until around 2007. We were all encouraged to do different things with our lives, but somehow with 4 professional musicians in our generation, and even more younger cousins working on their craft, I now make jokes about music being the family business.

Munit Mesfin is just so easy to love. Munit + Jorg are based in Addis Ababa, and when this video dropped, I had never seen anything like it out of Ethiopia. "Noro Noro" is a song all about living your truth.

The Nile Project is doing the good work of addressing the Nile Basin's cultural and environmental challenges by curating collaborations between musicians from all 11 countries the Nile River touches, amongst other things. Musicians learn each other's traditions and the work coming out has been so exciting. This particular song features Selamnesh Zemene who is one of the most powerful singers I heard the whole time we were in Ethiopia and Dina El Wedidi from Egypt. Beautiful work!

Krar Collective are based in London, UK and have been touring all over the world the last few years. With nothing more than vocals, a krar and kebero drums, these 3 have a huge sound and put on such an energetic show. Getting to rap with them last year in Seattle was like a little musical dream come true.

I've been a fan of Wayna's work since first hearing it back when myspace was a thing, and her album The Expats was one of my favorites from anyone last year. I had this song on repeat often, the masinko and the lyrics on this one just get to me. Wayna is another artist you have to see live.

I spoke earlier about how coming up I didn't know a lot of other Ethiopian emcees, these days I learn about another one every week! My producer/homie AirMe put me on to Ras Neb out of Washington, DC (aka Ethiopia's 2nd capitol) earlier this summer. I really dug how much of growing up in DC got captured in this one song and how it feels like a throwback and the future at the same time.

This last video isn't a song, but an experimental performance. Melaku Belay runs a popular Azmari bet in Addis Ababa called Fendika. The best live music that I saw in Ethiopia happened there. Some things I learned from Fendika, as well as watching greats like Mahmoud Ahmed and Aster Aweke in concert, is that Ethiopian music is to be experienced, that the best moments are simply unrecordable, and that the dance is as important as the music itself. Fendika also captured everything I love about Hip Hop without even trying. The energy, the improvisation, the excellence and the outcasts. This video is Melaku dancing to everyday sounds of people working at Merkato, Ethiopia's largest open-air market.