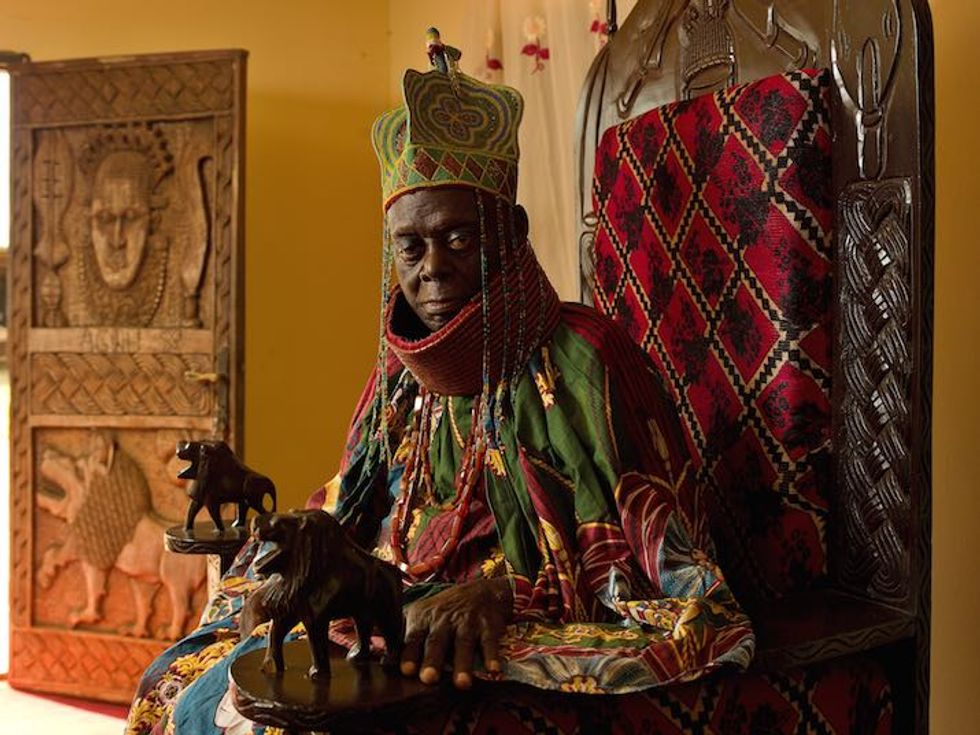 Nigerian photographer George Osodi's royal portraits of Nigerian monarchs are on view at the Newark Museum February 25 through August 9.

All images provided by the Newark Museum

Royals and Regalia: Inside the Palaces of Nigeria’s Monarchs is the Newark Museum's forthcoming exhibit of large-scale color portraits by acclaimed Nigerian photographer George Osodi. The images, which are are being exhibited for the first time in the U.S., come from Osodi's Nigerian Monarch series--an ongoing photo documentation of present-day kings and queens ruling throughout the country.

Osodi, a Lagos-based photojournalist who is best known for his exposé on the environmentally degrading effects of the oil industry in the Niger Delta, traveled around Nigeria for several years training his lens on the traditional rulers who serve as mediators and regional custodians of law and order. The vibrant life-size portraits featured in the exhibit capture the monarchs on their thrones draped in full regalia, either gazing steadfastly into the camera or in lavish repose with their royal court. The intimate images of life within Nigeria's palaces and throne rooms celebrate the rich customs, beautiful finery and storied histories of the men and women who remain important figures within the West African nation's complex political and social landscape. Complementing Osodi's portraits throughout Royals and Regalia are ceremonial robes, beaded headgear and jewelry from the Newark Museum's private collection.

One portrait of note that highlights the existence of female sovereignty within African monarchies is that of HRH Queen Hajiya Hadizatu Ahmedu Magajiya of Knubwada, Northern Nigeria's only queen. Accompanying Queen Hajiya Hadizatu's photo is this brief text by Osodi that reads:

"Kumbwada is currently being ruled by Queen Hajiya Haidzatu Ahmed and her court. An ancient curse keeps males off the throne, according to locals. The Queen's royal title is inherited on the female side of the family, and the current Queen's daughter, Idris, is the queen's successor. Kumbwada has been ruled by women for at least six successive generations since its conquest by Princess Magajiya Maimuna of Zaria; the last queen, Queen Hajiya's grandmother, died at the age of 113."

In an interview with The Economist, Osodi explained his motivation behind the photo series which he has been working on as far back as 2006. "Nigerian Monarchs was a platform for me to showcase the rich culture that abounds in the country which has been so heavily neglected," he said. "These monarchs existed even before the colonial inculcation so they have played a very important role. It was very important that I revive that memory in by celebrating these various kingdoms and their culture."

As a Nigerian creating a living archive of his people, Osodi takes ownership of his cultural identity by actively countering the "othering" gaze so prevalent in images of Africa propagated by Western photojournalism. "There are so many undertones to this project," he continued. "There have been a lot of pictures taken of various African monarchs, but most of those images were taken by foreigners especially during the colonial era or in most cases when a king is being deposed. It doesn't look dignifying. It looks more or less like a subject and a master. So I thought it was very important for me as an African to see that dignity in them and use my medium to tell the world how important they really are."

George Osodi's Royals and Regalia: Inside the Palaces of Nigeria’s Monarchs is on view at the Newark Museum February 25 through August 9, 2015. Scroll through the gallery above for a selection of images from the exhibition.