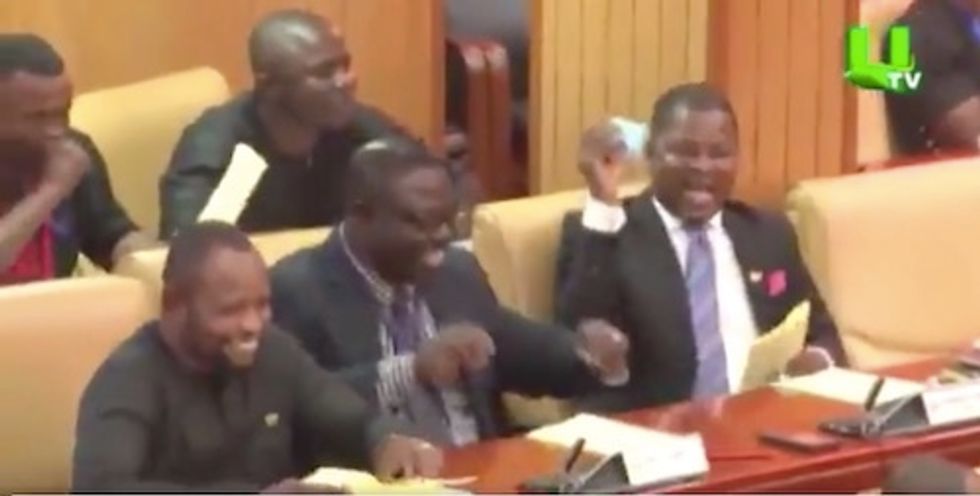 Names such as "Vagina is Wise" and "Penis is a Fool" left members cackling.

Ghanaian lawmakers just couldn't keep it together on Friday, when the names of villages in the Abirem constituency in the Eastern Region of the country were read aloud during a meeting.

MP John Frimpong Osei began to list areas in his constituency that are in need of electricity, and a few of the Twi names make direct references to genitals.

BBC Africa provided some of the translations for the names:

A video shared on social media, captures the MP's jocular reactions when Osei began to read the names of the villages lacking electricity.

Though the meeting appeared to have taken a flippant turn, Ghana's Energy Minister Boakye Agyarko went on to address the real issue at hand, stating that a survey would be conducted to determine how the villages in Abirem could be connected to the national grid—but not before offering a joke of his own about the village names: "Providing them with electricity may interfere with nocturnal activities," he quipped.

Despite some areas still lacking access, about 80 percent of Ghana's population has access to electricity—one of the highest rates on the continent. Let's hope that the hilarity that ensued will translate into serious action to provide remaining areas with full electricity.

As for the names of the villages, it's clear that they weren't intended to simply induce laughs. According to BBC's Thomas Naadi, historically, names of villages were inspired by the life experiences of the first settlers.