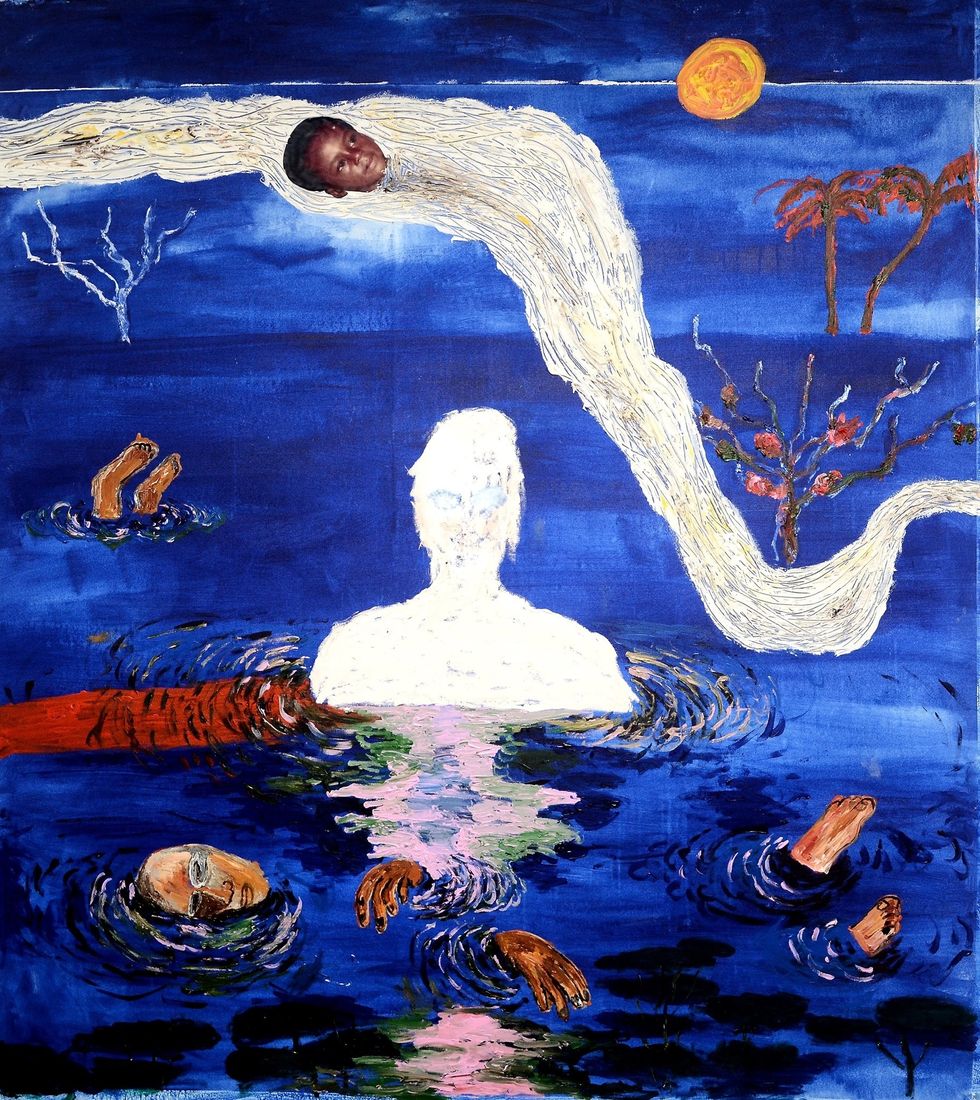 The Ghanaian artist recently showed "Memoirs Through Pokua's Window" at the New York edition of 1-54.

This year's New York edition of 1-54 Contemporary African Art Fair drew a variety of talented artists who shared common themes of love, family, identity, and oppression in their works. Out of the 21 galleries that presented at the fair, Accra-based Gallery 1957 showcased a beautiful ensemble by rising star, Gideon Appah.

He started drawing from a young age of 8-years-old. He says his first love was drawing portraits of characters with a certain type of emotional intensity. He then went on to obtain a BFA in painting at the Kwame Nkrumah University of Science and Technology in Kumasi, Ghana. Appah was discovered by Gallery 1957's founder, Marwan Zakman while exhibiting at Nubuke Foundation last December while showcasing, Pokua's Place a—series that inspired his current work at the gallery.

His latest project, Memoirs Through Pokua's Window, is a way to escape reality and create in a celestial, dreamlike state based in nostalgia from his childhood memories with his grandmother. Because she was a priest, he felt that it was only right that he explores the connection between family politics and spiritual things. Her essence seeped into the walls, people, and his family.

Nsuteen buom (River With a Room). From 'Pokuo's Place." Courtesy of Gideon Appah.

Appah draws on the West African childhood narrative that most people, myself included, feel very connected to. The exhibit at 1-54 replicated his childhood home in aesthetics with wooden or cushioned furniture, pictures of immediate and extended family hung up on the wall, and religious pictures which sets precedence on the family ritual which is not limited to family prayer, church meeting and spiritual incantations as the front line of communication. The room was first encapsulated by wooden beads, similar to the ones you find in a mother's room in West Africa. Along with kerosene lantern, a stove, a few spiritual beverages, and recorded videos tapes, these reused items are meant to show a certain type of emotion of when he revisited his grandma's home. "Going home to a certain emptiness is what inspired the work which is what was I wanted to replicate," Appah says. "I want to show the Ghanaian culture I knew and I had to be go home to do that."

Appah's process is simply beautiful. As you can see, he interlaces the physical space with imagination as he mixes copies of family photographs into his canvas. "When I have the canvas primed, I sketch out what I want to paint, then I transfer photographic prints from paper onto the canvas by using glue and water," he explains. "Then I wait for it to dry. After, I clean it up to reveal the photograph. Then I paint." It's clear his favorite colors are royal blue, crimson, dark orange and pale white, as it's consistent throughout his body of work.

Appah believes that Ghana is becoming more open to artists and other forms of storytelling that will allow his future work to shine through. As for now, he's riding the wave of his recent work and is excited about telling more stories in the near future.