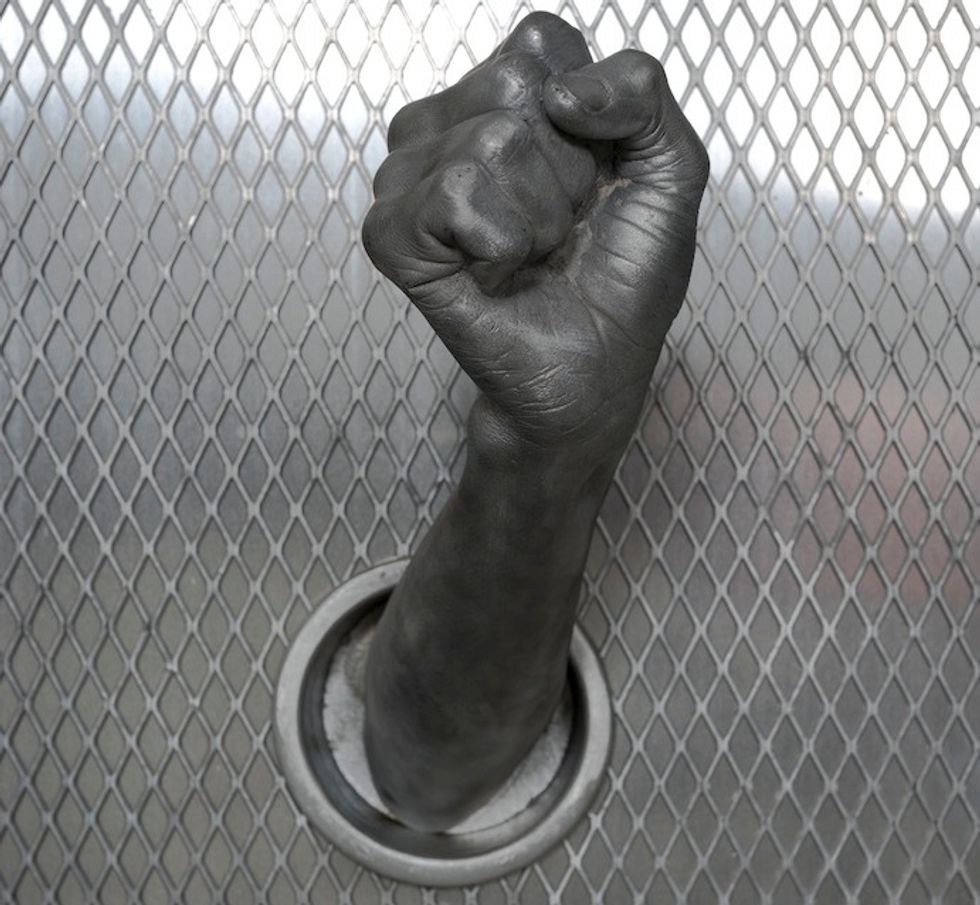 New York-based visual & conceptual artist Hank Willis Thomas has been no stranger to the South African art world after making his SA solo exhibit debut back in 2011 with All Things Being Equal.... Thomas returned to Joburg this year with his largest international show to date. History Doesn't Laugh (which ran at JHB's Goodman Gallery February 14 through March 29) is a series of installations, objects, and prints that saw Thomas digging through the archives to explore "the visual complexities of the not so distant past" in South Africa.

In a second exhibit through the Goodman Gallery, Thomas teamed up with longtime Okayafrica favorites The Brother Moves On to show his sound activated video installation Black Righteous Space, a project which he's been doing over the years. Thus far it's involved remaking the confederate flag in the colors of the negro liberation movement, the Neo Nazi AWB (Afrikaner Weerstandsbeweging) flag in iterations of colors based on the post-1994 South African flag, and the German Nazi Flag in iterations of colors of the rainbow. For the Johannesburg launch event, TBMO performed a set curated specifically to activate the Black Righteous Space pieces. We recently caught up with Thomas to pick his brain about his recent projects in South Africa. Scroll on for the full interview and take a look at images from History Doesn't Laugh and the Black Righteous Space launch event with the Brother Moves On and BLK JKS in the gallery above.

Okayafrica: Why is it important to you to show your work in South Africa?

Hank Willis Thomas: South Africa is the place that proved to me once and for all that "race" is a mythology created to relegate the many and benefit an arbitrarily selected few. It also taught us some of the most important lessons of the twentieth century about love, humanity, courage and the importance of speaking truth to power by any means necessary. I am still learning from those lessons so showing my work in this context is awesome.

OKA: When did you first become interested in looking at South Africa's history?

HWT: I'm interested in all histories. Especially the myriad micro-histories that exist within grand narratives. They always disrupt our ways of thinking about the world. Did you know that when many Black Americans went to South Africa during Apartheid they were granted "honorary white" status? What in the heezy? How come we didn't have that! Wait, maybe we do...

OKA: Why did you want to collaborate with the Brother Moves On for Black Righteous Space?

HWT: It was actually the suggestion of Emma Laurence of the Goodman Gallery. She's a good friend of the band and saw a symmetry between what I was doing by using sound to disrupt historically oppressive symbols and the multi-faceted historical and contemporary critique of political movements by The Brothers. The event was fantastic, it was an honor to share the stage with them.

OKA: Did you link up with any South African artists?

HWT: I have been there a few times and have been able to make friends with several people. I was most looking forward to connecting with Unathi Singunu RIP (formerly of Gugulective), but I was able to see friends like Mary Sibande, Zanele Muholi, Nandipha Mntambo, Lawrence Lemaoana, Mikhail Subotzky, Zen Marie, Pamela Phatsimo Sunstrum, Thenjiwe Nkosi. I also got to meet a lot of new people I hadn't known before.

OKA: Where did you prepare/do your research for History Doesn't Laugh?

HWT: I had an archive of things from my trips on the past and also went to Munich to see Okwui Enwezor's encyclopedic exhibition the rise and fall of apartheid. I also went to South Africa last fall just after shooting a film in Kenya for Sundance Institute and the Bill and Melinda Gates foundation. I was granted a residency at NIROX Foundation near the cradle of humankind, and my friend Rosa White and I did research in historical archives and vintage collectible shops.

OKA: Your exhibit features many clenched fists and symbols of protest. How do you feel your art speaks to the current socio-political moment in South Africa (upcoming election) - and the United States?

HWT: After the passing of Madiba, South Africa is trying to find out who it will be as a cultural and political force in the 21st century. How much of it's 20th century legacy will it keep and how much will it have to let go to move forward. My work is a reflection on the complexities of this challenge. There are iconic works of commemoration, but there are also works about moving forward, or at least rethinking the past.

OKA: You use archival advertising material in previous exhibits such as What Goes Without Saying, what exactly did you want to comment on with your use of old South African adverts in this exhibit?

HWT: I see this exhibition and my upcoming exhibition in Berlin at Galerie Henrik Springmann "...and only the people" as meditations on 20th century methods of mass communication through protest and the commodity culture that has benefited from the struggles and needs of oppressed people. Archival images are like time capsules. They do function as windows into the past, my task is to activate them in such a way that they are relevant to the present moment as well.

OKA: Any plans for upcoming projects in South Africa or perhaps the rest of the continent?

HWT: I'd love to move there. So, so much happening. Wanna come?!

View photos from the Black Righteous Space launch event in Johannesburg with The Brother Moves On by Anthea Pokroyin the gallery above.