Hey, Jeremy Lin, We Need to Talk About Your Dreadlocks 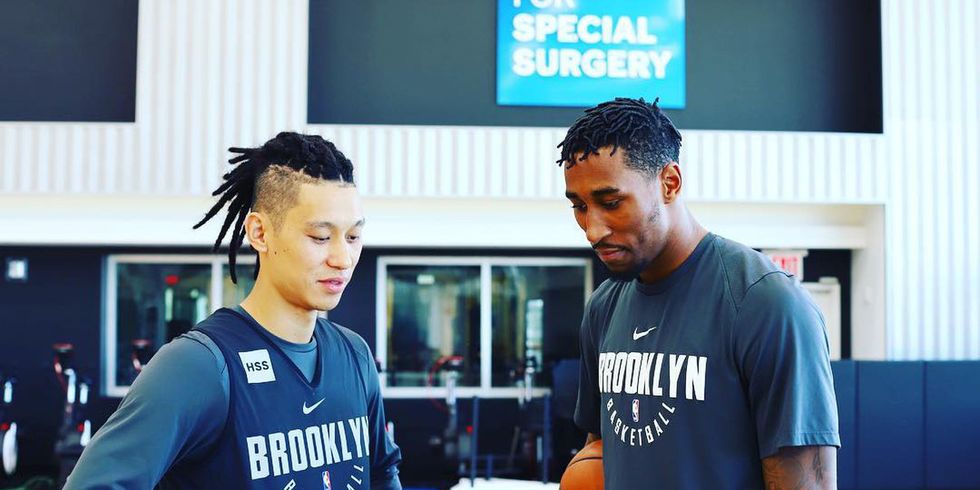 An open letter to the Nets guard, Jeremy Lin about his new dreadlocks, cultural appropriation and Black Lives Matter.

We need to talk about your hair—one Asian-American to another.

This might be the first time the "some of my best friends are black" argument has ever had a grain of truth to it. Maybe your black friends love your dreads. Maybe they think it honors their experience when you spend eight hours of processing to take your straight Asian hair into "trendy" dreadlocks.

According to your essay in the Players Tribune, Rondae, D-Lo, DeMarre, Caris, Savannah, Nancy and Kemba all told you to go for it. Rondae even grew his hair out so you could get it done together at the "All Hair Matters Salon" in Rockland County.

Even The BasedGod himself has spoken in your favor, going so far as to issue a fatwa upon your greatest critic, Kenyon Martin.

Also to ex Nba player Kenyon Martin! Who cares if Jeremy Lin wants to be black or whoever u just watch the hate or you be cursed! - Lil B
— Lil B THE BASEDGOD (@LILBTHEBASEDGOD) October 6, 2017

NBA Kenyon Martin is cursed for his no reason hating on Jermey Lin.. he is cursed until further notice that's from “ The BasedGod “ - Lil B
— Lil B THE BASEDGOD (@LILBTHEBASEDGOD) October 6, 2017

Kenyon Martin made sports history as the first retired player to be cursed by “ The BasedGod “Don't no if he should be proud or not! - Lil B
— Lil B THE BASEDGOD (@LILBTHEBASEDGOD) October 6, 2017

And, as you pointed out on Instagram, Kenyon Martin has tattoos of Chinese characters, giving his arguments a whiff of the ridiculous. But, I'm sad to say, your friends, Lil' B included, do not speak for a larger community—only themselves.

The cultural appropriation debate has reached a ridiculous pinnacle of late, with allegations thrown about so liberally that the concept often gets divorced from its material origins. And while that argument is easy enough to do—you're a public figure monetizing your brand by literally wearing blackness on your head—I'm not going to dwell on that.

I'm going to talk about your beautiful Asiatic hair, untainted—as mine is—by regressive Yacubian genetics. If you grew up in a majority Asian neighborhood as I did you may have seen some incredible hairstyles. You may have even dabbled, as I did, in the nineties Viet-gangster look: bleached bangs with a center part and an undercut.

Or the shaved head with single braid—something I could have never pulled off—an edgy homage to the era of Chinese exclusion and "coolie labor." Maybe you even got a fade with high spikes. Add a visor and you got the Azn b-boy look straight from the pages of Asian Avenue. Do you remember Asian Avenue, the rave-era Asian American social network?

Maybe you experienced none of this. But my point still stands—there are endless opportunities for aesthetic exploration that don't involve crossing a line into blackface. I'm sure I don't need to explain what blackface is or the psychic violence it imposes on those of African descent in America.

And, as non-black dreads love to argue—many cultures have throughout history adopted dreadlocks for various purposes that don't involve mimicking blackness. From Hindu holy-men who were said to have inspired Rastafarians to white crusty punks whose putrid balls of bleach-destroyed hair hang off their heads like tufts of fur on a mangy dog. There are even some white supremacists, as we recently witnessed during the Charlottetown debacle, who see dreads as a connection to some sort of ancient Viking heritage (yeah right!). But this is not what you are doing.

Jeremy, in your thoughtful essay in the Player's Tribune you wrote:

...as an Asian-American, I do know something about cultural appropriation. I know what it feels like when people get my culture wrong. I know how much it bothers me when Hollywood relegates Asian people to token sidekicks, or worse, when it takes Asian stories and tells them without Asian people. I know how it feels when people don't take the time to understand the people and history behind my culture. I've felt how hurtful it is when people reduce us to stereotypes of Bruce Lee or "shrimp fried rice." It's easy to brush some of these things off as "jokes," but eventually they add up. And the full effect of them can make you feel like you're worth less than others, and that your voice matters less than others. So of course, I never want to do that to another culture.

In a year when the extrajudicial killings of black Americans have spurred a vital national protest movement in Black Lives Matter—a movement that your colleagues in the NFL are risking their careers to support—your adoption of African hair has real symbolic meaning. And no, not the same way Kaepernick's Afro has symbolic meaning. Where his says solidarity with victims of police violence and a connection with black revolutionaries past and present yours just suggests vanity—and ignorance.

Not a good look, dude.