How I Found Empowerment in Unspeakably Horrible Sex 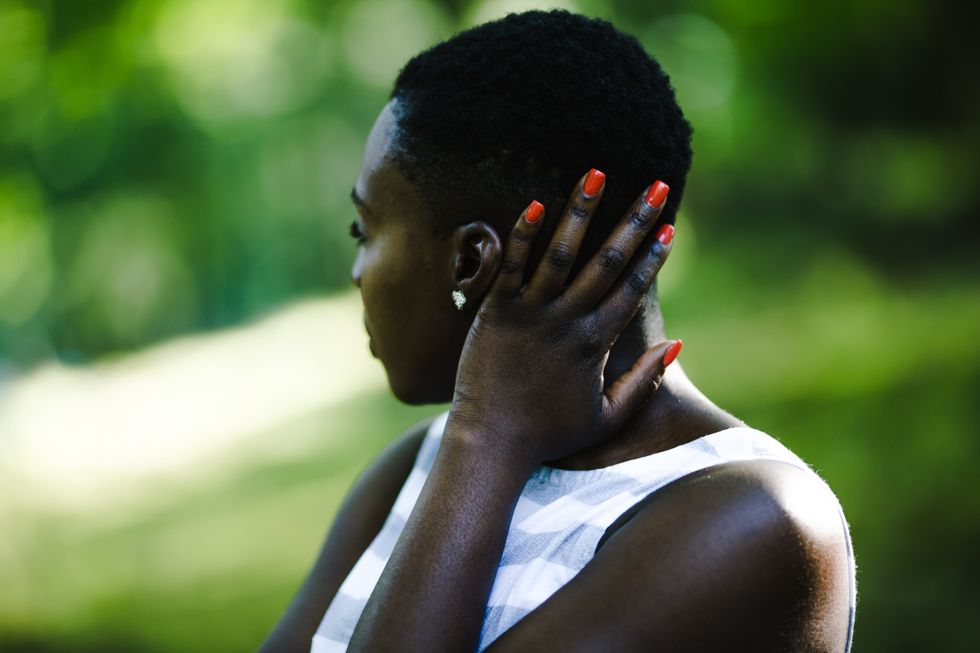 Society expects women to be non-interfering bystanders during sex. I refuse to be quiet.

Picture this: I have just spent over an hour in the shower eliminating every hair on my body. Despite the many nicks caused by my Schick blade and the mild Veet burns, I forge on in my quest for silky smooth skin. Moments later I am out of the shower and rummaging through my cupboard for my "sexy" underwear—no granny panties tonight. I lotion up and generously spray myself with my favourite perfume. I slip into a cute little dress I know will be equally easy to slip out of.

Fast-forward to my eight o'clock rendezvous and I wish I hadn't gone through the trouble of all that preparation. I have just had the shortest and most lacklustre sex of my life. I feel robbed—cheated even. I just want to take my sex back, fam. You ever feel like that? To add fuel to the fire, my lover seems enthusiastic about yet another round and is preparing for just that. At this moment, I quickly dress myself without uttering a word to him. I grab my keys and announce that I'm leaving and that this is not what I came for. And with that, I'm gone.

Sex is probably one of the most talked about topics there is. In fact, last year I wrote an article that spoke of my terrible sexual encounters with African men in particular. As you can imagine, it sparked a lot of debate, laughter and even anger. While that article focused on the failings of African men in satisfying us as African women, what it didn't highlight was how that same dissatisfying sex proved the most empowering for me.

A few months back, the above scenario would have played out very differently. I would have entertained this lover and reluctantly agreed to a second round of what I knew wouldn't be much better—my various attempts to guide the process ignored. I would have pretended that sex with him was somehow amazing. I would have spent the night, leaving in the morning with the promises to hook up again but with absolutely no intention of doing so. But why, you ask?

I've learned to stop dead in the middle of sex and convey that I'm just not feeling it.

In the beginning, when sex was still a new experience, I, like so many other women put up with a lot of the bad to get to the good. You know, going through the rain to get the rainbow? Wild, I know. However, if you're like me, you've only had the bad thus far with no sight of the good. And so you learn to make the most of it. You take the lessons wherever they present themselves. And that's what I've learned to do. I've gone from being timid, apprehensive and submissive to being vocal about what it is I want and don't want sexually. I've learned to stop dead in the middle of sex and convey that I'm just not feeling it. I don't care about blue balls—they're a myth—and I will be going home now. I have learned to stand firm in the face of both aggressive and sweet-talking lovers who won't accept my decision to leave.

Sure I want good sex—scratch that, I want great sex. And of course I want the elusive "Big O," what woman doesn't? Feeling empowered by sex for me is in not an acceptance of bad sex but rather an acknowledgement that without it and its repeated encounters, I would never have found the courage to finally call out bad sex for what it is—bad sex. Were it not for these experiences, I would never have built up the nerve to tell a man to his face that what he considered magical was no such thing. I've cast aside my conditioned desire to soothe and protect the male ego—even under false pretenses.

Toxic masculinity expects us to be non-interfering bystanders during sex or at the very most, quiet participants.

As horrible, frustrating and sometimes maddening as most of my sexual encounters have been, hindsight has shown me that I have stretched (no pun intended) and grown to become more assertive and independent in a space where women are traditionally taught to be quiet and demure. Toxic masculinity expects us to be non-interfering bystanders during sex or at the very most, quiet participants. I have learnt to wholly reject that narrative and hope that so many other women will do the same.

And so to all my lovers: for your weird references to sex while we're having sex, for your amateur attempts at foreplay, for your ignorance of my female form and less than impressive set of 'skills'— you need to do better. And just because I've managed to turn our horrible experiences into a glorious moment of learning and evolution, you are not exonerated. No beloved, the credit goes to me.