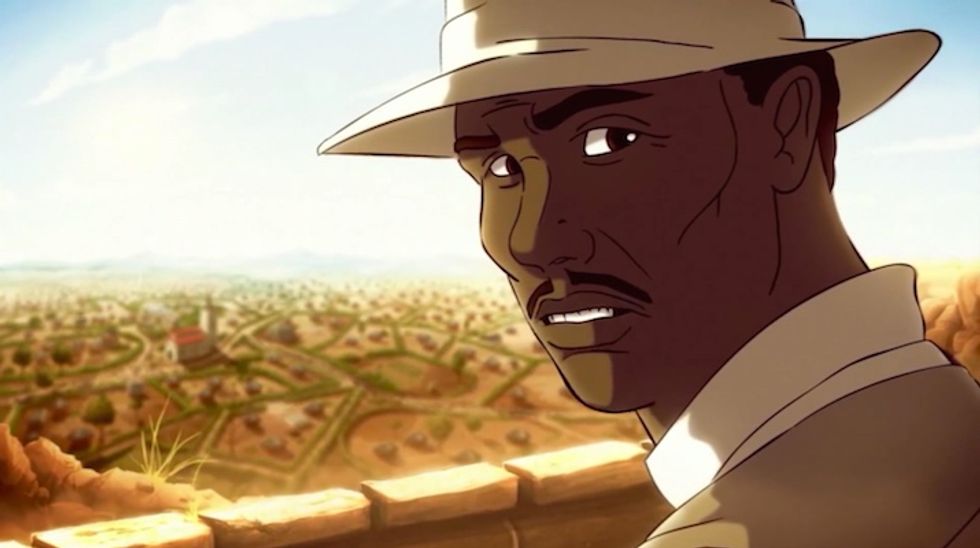 'I Am Khama' is a forthcoming animated film about King Khama III's bid to save Becheunaland (now Botswana) from annexation by Cecil Rhodes.

I Am Khama is a forthcoming animated feature film based on King Khama III’s 1895 campaign to protect Becheunaland (now Botswana) from continued plunder by British imperialist Cecil Rhodes. The film chronicles events surrounding the famed Tswana monarch's tour of Britain, where he lobbied against the proposed annexation of his land by Rhodes' British South Africa Company. Director Mark Macauley (who previously authored The House Of Slamming Doors) recently shared a preview clip of the film, which he calls "the tale of the true founding of Botswana." Currently in pre-production, I Am Khama has a number of actors signed on to voice the major roles, including Colin Salmon (Law & Order UK) as Khama and Conleth Hill (Game Of Thrones) as Cecil Rhodes.

The film is slated for a 2016 release. Watch a short clip and read the full synopsis below. Keep up with I Am Khama on Twitter.

"It is 1895 and Her Majesty, Queen Victoria, governs half the World. King Khama, a charismatic African ruler, is furious. The British Government is about to give control of his country, The Bechuanaland Protectorate, to Cecil Rhodes, the richest diamond tycoon in the World, who will remove Khama and put his people under the shackles of colonial rule. Khama rushes to England accompanied by two eccentric kings and a young white schoolboy who insists he’s African, and loathes the English. The three kings make a whirlwind tour of Britain trying to gather enough support to save their country 'for our children and our children’s children'. Success! Support floods in from all over the land. But then? Disaster! Khama discovers that all is lost unless he can discover Rhodes’ real plan: to use Bechuanaland as a platform, attack Johannesburg and steal all its gold. Khama discovers the plot and threatens exposure. The Government is forced to surrender. Khama goes to Windsor Castle and charms Queen Victoria, who formalises the new agreement. Khama has saved his country for the future. Bechuanaland is now called The Republic of Botswana, and is Africa's success story."