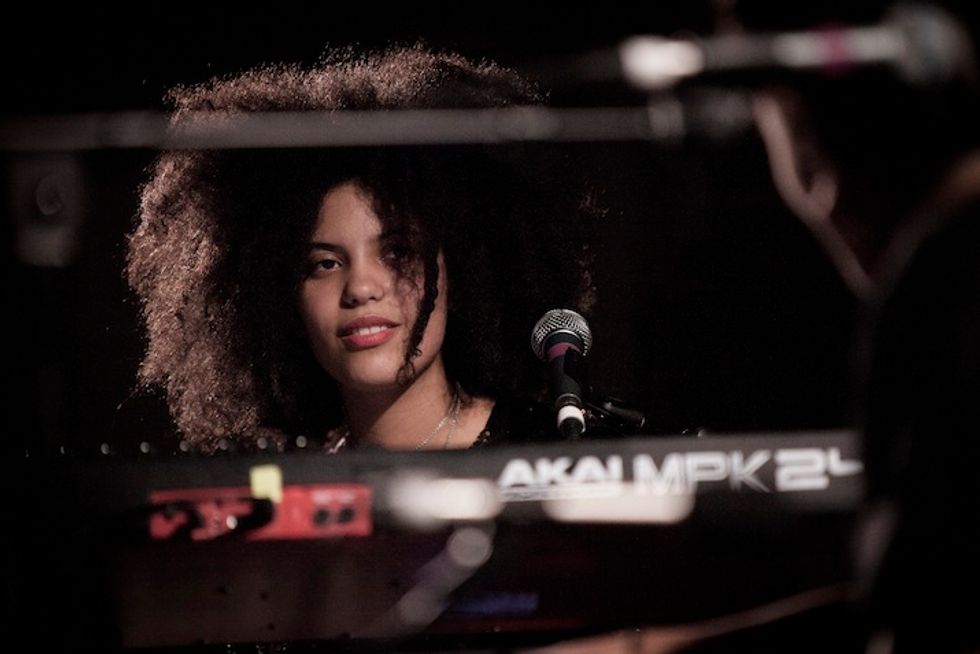 After putting out two of Okayafrica's Top Songs and Top Videos of 2014, French-Cuban twin duo Ibeyi released their self-titled debut album on XL Recordings last week. On Thursday, the 20-year-old sisters (Naomi and Lisa-Kaindé Díaz) brought their Yoruba spirituals to Bush Hall in London, where UK/South Africa-based photographers and writers Sydelle Willow Smith and Olivia Rose Walton were on hand to document.

Once my sister sat me down in our mother’s house and said, stop doing that other shit and listen to this. No, I’m serious. She played “Oya,” off Ibeyi’s EP. It turned the room into a cathedral, into a dark patch in a forest, into the ocean—for the length of the song we were in some other place.

A few month’s later I’m walking to Bush Hall in Shepherd’s Bush, London, late for Ibeyi’s show, trying not to let the rain into the neck of my coat. At the venue—warped mirrors on the walls under Edwardian ceilings, a small stage at one end—my friend is at the very front, leaning on the stage. The lights dim, and the girls come on. They stand front and centre and begin to sing their haunting song, each sister’s voice twisting around the other’s until you can’t hear where one ends and the other begins. You can hear in their voices the gods and goddesses they are singing to. Their song stops, and they take their seats, laughing. The audience here is all smiles. A woman to my left has her hands up in half-prayer. She knows what we are waiting for.

The sisters, Naomi and Lisa-Kaindé, use their live show to turn their own music—which we know already is beautiful—and make it bodily, spiritual. Take the Batá drums, interweave them with hip-hop, the songs of Yoruban deities, the beats Naomi plays out on her thighs and her chest, the French jazz flair of Lisa-Kaindé, and you have a wild thing—music that transports you and gives you a new sense of what sound can be like, what a crowd can be like. I’m standing there watching them wondering how they do it. Now they are one woman, now they are two. I realise that inside the song we’re inside the language of twins. You are listening to their music, yes, but the beat and the melody and the trip from one sister to the next is also written by the secret language they have between themselves. You can see it as they watch each other, take cues from and tease each other. They laugh often: when Lisa-Kaindé announces the track "River” and the audience goes mad for it, she laughs in surprise. Like she’s thinking, "What, us?" “Yes, you! You, you!” the girl next to me shouts.

Afterwards, I ask them to sign the LP I’ve just bought from their mother, their manager. “It’s for my sister,” I say. Lisa-Kaindé looks at me. “Of course,” she says. Above her signature she writes, "Love and music."

Ibeyi's self-titled debut album is out now on XL Recordings.

Sydelle Willow Smith was born in Johannesburg and now lives mostly in Cape Town. A graduate of the Market Photo Workshop with a background in Visual Anthropology, she is currently completing her Msc. in African Studies at the University of Oxford.