Imarhan Are Pushing the Boundaries of Desert Rock 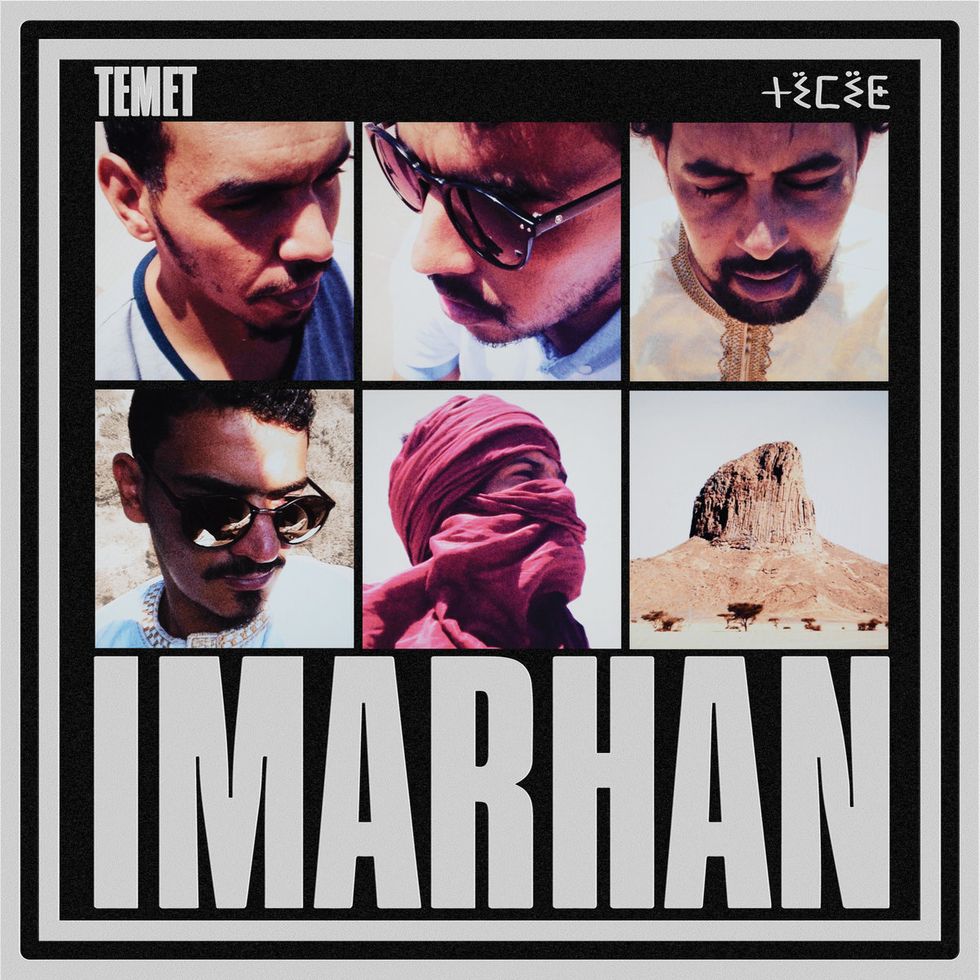 The group's new album, Temet, doesn't just take the next step in Tuareg music. It sends it into hyperspace.

Imarhan's second studio album, Temet, is as much about where Tuareg music has been as it is about where it's going.

Imarhan's musical stylings stem from centuries old Tuareg traditions. As a semi-nomadic people, the Tuareg forged their culture across North Africa with territory stretching from Tripoli to Ouagadougou to Timbuktu. Tuareg music has always encompassed elements of the numerous cultures located along their historic trading routes while retaining their own unique pentatonic scales and polyrhythmic patterns. On their eponymously titled debut album, Imarhan paid homage to these origins through the emerging genre of desert rock and simultaneously nudged the tradition forward.

But Temet doesn't just take the next step in Tuareg music. It sends it into hyperspace.

The album is an addictive listen from the start and the opening track, "Azzaman," sets the tone. A haunting solo infused with Rai music's vibrato opens up to an increasingly rich chorus of voices that chant the song's hook as if it were an incantation. Layered beneath are hypnotic polyrhythmic beats accompanied by a reverbed guitar loop. The song culminates in a bluesy guitar solo reminiscent of 1960s Led Zeppelin. This sparse instrumentalization leading to a complex soundscape makes it seem like the song itself is traveling through the desert into a metropolitan city like Imarhan's hometown of Tamanrasset, Algeria.

By far the album's most danceable song, "Ehad wa dagh" sounds like something Joe Strummer wished he wrote for the post-punk days of the Clash. The opening riff signals it's about to be time to move and is quickly joined by a counterpointed conversation between rhythm and melody that continues throughout. Conversely, "Tarha Nam" with its acoustic guitar and soulful vocals recalls early Tuareg music and conveys the lonelier side of wanderlust.

In essence, every song on Temet is a complete narrative arc unto itself, each describing one facet of Tuareg's multivariate culture. But more than that, Temet reveals a broader view of North Africa in general and Imarhan's home in Tamanrasset in particular, suffused as they are with multiculturalism.

While some groups might worry about leaving behind fans loyal to more traditional forms of desert rock, Imarhan takes a philosophical approach when talking about their new sound. As the group's leader Iyad Moussa Ben Abderahmane comments, "We didn't think about changing our music, it's been a very natural evolution."

Similar to Tuareg music's early eclecticism, extensive travel is to thank for catalyzing Imarhan's evolution. "With our debut album we played lots of shows in lots of different places," Abderahmane continues, "we also met many artists on the road." These experiences inspired the band to question imposed limitations, and as he puts it, " borders of all sorts and especially in music."

Embracing outside influences for Imarhan is by no means an abandonment of their heritage. Though Temet includes different kinds of influences, "the main influence remains and will always remain the tamashek culture. It's the base of our music, the rhythm, the words, the poetry" says Abderahmane. Fittingly, Imarhan's lyrics are written in the Tuareg language of Tamashek and part of the self described mission of the group is to preserve it since, as Abderahmane observes, "language is the basis of any culture."

But nor are local and global antipodes in a simplistic binary equation for Imarhan. According to Abderahmane, "we feel the whole world is part of the same house. Temet means connections, between people, between brothers, friends or simply neighbours...everything and everyone is connected." This ability weave complex connections between their own culture and those they encounter creates a kind of fluidity between definitions of the personal and universal as each become inextricably intertwined with the other. In this, Temet becomes something transcendent. It is both the next step in Tuareg music and audible proof that dispensing with boundaries doesn't mean the loss of identity or the dilution of culture.

Rather, in literally harmonizing so many diverse cultures while retaining and enriching the core of their own, Imarhan creates a model of what the world might look like beyond boundaries and borders. It's also just a really good listen.

Temet is available from City Slang on Spotify, YouTube, BandCamp, and elsewhere. Starting July 14 Imarhan goes on tour across Europe.