In Conversation with Coodie & Chike: The Celebrated Director Duo on Authentic Storytelling & Their New Documentary About the Life of Stephon Marbury 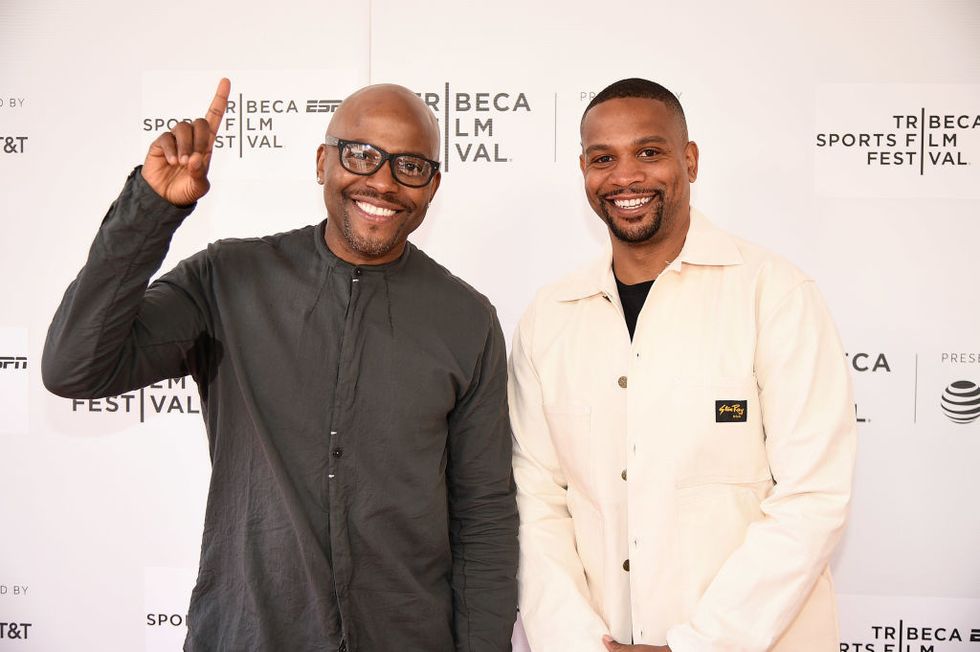 Coodie & Chike at the premiere of 'A Kid From Coney Island.' Photo by Theo Wargo/Getty Images for Tribeca Film Festival.

We chat with Coodie Simmons and Chike Ozah on their diverse backgrounds and how they impact the purpose of their mission.

Coodie Simmons and Chike Ozah are an oasis of calm in the intense energy of the Tribeca Film Festival. Simmons, a veteran comedian who hails from Chicago, effortlessly works comic relief into conversation. Ozah, a motion graphics designer born to a Nigerian father and a New Orleans-native mother, breaks down and makes sense of the purpose behind the work they've produced over the past 15 years. As we talk, it's clear you can't have one without the other.

You might be familiar with Coodie & Chike, as they're known, through Kanye West's iconic music video for 2004's "Through The Wire"—where the pair incorporated documentary footage they captured of West with mixed media elements. They eventually transitioned into producing impactful documentaries under their production company Creative Control, including the critically acclaimed ESPN 30 for 30, Benji and BET'sMuhammed Ali: The People's Champ, which took home the 2016 NAACP Image Award for 'Best Television Documentary.'

Coodie & Chike's latest came from an unexpected opportunity—to direct and write A Kid From Coney Island—a documentary on NBA notable Stephon Marbury. They say it came to be after an initial reach-out from Emmy Award-winning broadcast news and documentary producer Jason Samuels. At first, they were hesitant to hop on the project due to their preconceived notions about Marbury that the media at the time perpetuated before the star left the NBA to play professionally in China. Once they learned that Nina Yang Bongiovi and her producing partner Forest Whitaker were involved, there had to be an amazing story ahead of them.

A Kid From Coney Island is a raw account of Marbury's life and career. You see and hear from Marbury himself in the film through Coodie & Chike quintessential use of archival footage from his past to the present. The duo was also able to tap his family, former teammates, community tastemakers and hip hop icons—who genuinely encapsulated Marbury's impact on the world.

In our conversation below, we learn more about challenges the duo faced while making the documentary, how their diverse backgrounds impact the purpose of what they do and more.

This interview has been condensed and edited for length and clarity.

Antoinette Isama for OkayAfrica: Can you touch on what it was like being able to collaborate with Stephon directly, especially since we hear from him quite a bit in the film?

Chike Ozah: It was awesome. We had to meet with him to build a rapport and that interaction was going to determine what was happening next. But when we met up with him, it was like meeting a brother from another mother—it was all super spiritual. We all had backgrounds from underprivileged neighborhoods, so there were just certain things we all had in common. He felt so comfortable telling his story with us that he never checked in with the whole process. Some people would normally be in the back worrying about how you're going to make them look, but the first time he saw the film was the premiere at Tribeca.

Coodie Simmons: He told Chike, "Y'all got this."

It's not often that a subject entrusts you with their story so easily.

CO: Especially from someone who endured the kind of backlash he received from the media—I don't see why he should trust anybody.

What were some challenges you both came across while putting the documentary together?

CS: Researching and getting footage was a challenge at first. Jason Samuel used to work at ABC and had a relationship over there—he had access to all of this footage of Stephon while he was a student at Lincoln High School. We got to go through boxes and boxes of beta tapes and that was it right there.

How would you describe your dynamic?

CO: Outside of that on a personal level, he's like an older brother to me. I can look to him for wisdom and advice and a lot of personal life situations. I'm definitely check with him before I check with anyone else except my mother.

CS: And he keeps me young.

A Kid from Coney Island | Deadline Studio at Tribeca 2019www.youtube.com

There has been a steady increase of unapologetic black representation on a global scale in the film industry as of late. How have your respective upbringings and cultures influenced how you two work together and how you both approach each project? How does that in turn speak to the cross-cultural collaboration that needs to continue to manifest in the black community?

CO: It has 100 percent influenced our work; it is our work. We recognize it just makes us unique as individuals. What makes Coodie, Coodie and what makes Chike, Chike is everything that the environment we were brought up in, how we were brought up, the zeitgeist of things that happen in your life that make you who you are. From being a black kid on Jackson Avenue and born in 1978, if I'm born in 1979 I am a different person—same for him. And when you bring those two [worlds] together, now there are these two unique identities forming one identity. Because we know that's a point of differentiation, nobody can duplicate that; then that's what we decide to use as the backbone to all of our work comes from that space.

CS: I was a standup comic and had a TV show in Chicago called "Travel Zero" and Chike went to art school. I didn't do any of that I barely graduated high school; he is the brains—

CO: I wouldn't say that, definitely not the brains. We draw from that space—like right now I am obsessed with Ancestry.com because I'm tracing back my family because that's all part of who I am—that's all going to become subconsciously intertwined in the stories that we make like being part Nigerian and that's a thing for me. Going to my aunt's house and eating fufu. My father went to boarding school, I get a lot from my father—the type of person he was.

But also coming from my grandmother who was born in 1920, but in the 30s and 40s she didn't work for anybody—she was self-employed, her husband passed away—so raising six daughters working in the shop, she was a true entrepreneur, when I thought that I got my entrepreneurial spirit from my father, it was my grandmother this whole time. I saw her from a young age hustling on her own, nobody telling her what to do but making ends meet, and now that connection to her legacy comes into our stories. And Coodie has certain instances he can pull from growing up in Chicago.

CS: I was the only boy amongst three girls and my father worked really hard to take care ofus with my mother being the housewife. I've seen that hard work that he put in, and they didn't pressure me to do anything. With my pops, he would always say, 'It was always a money thing' which I took from him, but I was like 'No dad, it ain't a money thing all the time.' But turns out it was, but rather it's how you look at money. Some people look at money like it is the root of all evil, but it's definitely a necessity that you need but learning that, I think of my pops all the time—was telling me something that was real.

What are some pieces of advice you would give filmmakers who are interested in getting their work into the film festival circuit?

CS: All of our stories that we've been telling, we don't tell for the festivals or the public. When we did the Mohammad Ali doc, we told that story for him, that was his story and everybody watched. Beji was for Chicago—we wanted to make the thugs cry, that was our focus we didn't focus on anything but that. For Stephon, we did it for his family, and it shows.

CO: Narrow your focus down to something you can actually control, you can't control getting into a film festival—it's totally out of your control. What you can control is making a story to create the impact you want it to have. Put your heart into that and you'll make a good product. Know who and why you're making it for and stick to that.