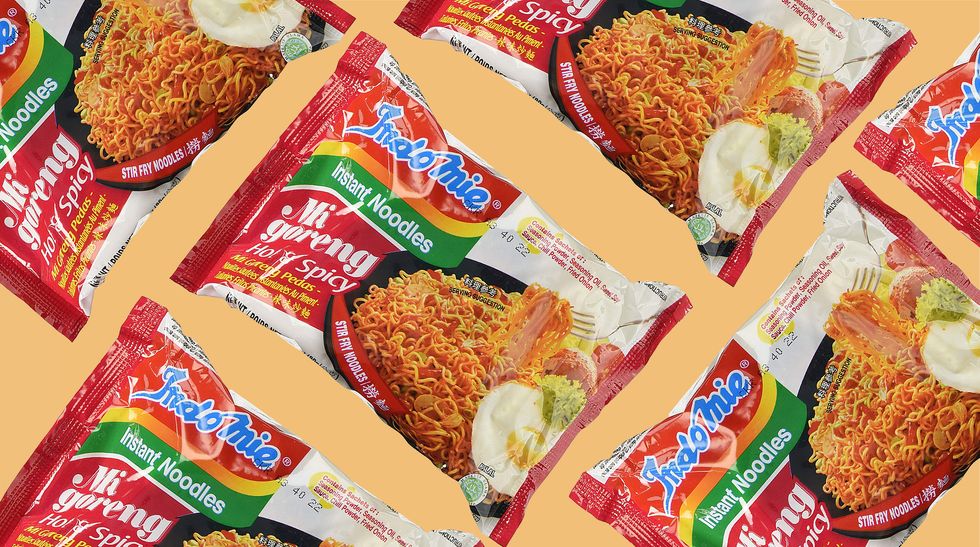 What does Nigeria's way of preparing this beloved brand of instant noodles say about the country as a whole?

Before I came to Lagos in September to begin a collaborative performance project, I imagined all the ways the place would challenge all I had read and heard about it, and all the ways it might remind me of my home, Trinidad and Tobago. Of all the kernels of similarities I've encountered so far, Indomie is perhaps the most intriguing.

Indomie, a brand of instant noodles originating in Indonesia, has become the household name for all instant ramen noodles in Nigeria.

As a child, I would make Top Ramen, but ours was far less intentionally adorned. I had never seen anyone add anything but Golden Ray. I would try to be fancy with my own and add eggs, but they never quite attained Naruto ramen standards.

Indomie was my first meal in Nigeria. I had arrived in Lagos about two hours earlier. In those two hours I had seen something of the character of the city. In the midst of the clouds of dust and engine exhaust fumes I saw a woman almost fall out the car she was getting into, I saw men sitting atop a truck, like wrinkles in the night sky fabric, I saw selling, so much selling and buying and haggling. It seemed to me that everything was happening here.

Getting to my host's house in Surulere was a breath. There was electricity, praise be, and I knew since it was past dinner that food was coming. The evening meal would be a relief in this overwhelming city, I thought.

I received benign-looking noodles that my Nigerian hosts affectionately called by a name I didn't yet have the energy to learn. It was familiar enough for me to shove several forkfuls at once, and, as I came to realize, spicy enough to make your mans sweat like rain. Such was my introduction to Indomie.

On the back of every packet, there's a series of simple instructions. Typically it's just about boiling water before adding noodles and the small packets of seasoning to the water, and then serving hot. It leaves ample space for reasonable personal preference, advising different amounts of water for softer or harder noodles.

Nigerians have taken that space for personal preference and stretched it to capacity. Depending on who you speak to, Nigerians have added between five and nine steps to these generic instructions.

1. Boil water.
2. Add noodles
3. Add small seasoning or not depending on if you like your noodles cooked in the seasoned water.
4. When cooked, strain noodles.
5. Heat oil.
6. Add onions or not.
7. Add carrots or not.
8. Add eggs or not
9. Add anything you like really. Or don't add them.
10. Add noodles. Sauté noodles.
11. As you sautée noodles, add seasoning small small as you stir.
12. Add any and all the pepper you could find.
13. Serve hot and deadly.

My first Indomie experience included onion, mixed in with suya, sautéed with varied powdered seasonings and extra pepper. Since then I've had indomie with eggs, garlic, tomatoes, ginger and even peanut butter. I've heard stories of Indomie with egusi soup, people eating Indomie dry and having it with beans.

One friend of mine even talked about how as a child, him and his school friends would crush Indomie noodles, shake it up with the seasoning, pour the mixture into their pockets, and have handfuls on their way from school as though they were having crackers. The discourse on Indomie continues on Twitter, where Nigerians stay butting heads about the way to best prepare and consume the popular dish.

And although I think we can agree that consuming Indomie uncooked is always a cry for help, one thing stands out; Indomie is one constant in an ever-moving, ever-unpredictable Lagos. Unlike "traditional" foods like onugbu soup or pounded yam, Indomie takes less time and money to prepare. It transcends class in a country rigidly segregated by it.

You will find Indomie in university dorm rooms, on street vendors' fires, as well as in more affluent homes. Nigerians' preparation Indomie proves true the age old adage that the only constant is change. Indomie, wherever you find it, looks and tastes differently.

The Nigerian Indomie Recipe reminds us that Nigerians don't follow the rules. This is a city where it isn't uncommon for okada to drive against the traffic in the wrong lane, where police double as beggars, where the same market item can vary based on the customer. Through an active process of remixing, Nigerians take convention, and make their own.

Yeah sex is cool and all but have you ever had Indomie while enjoying the company of your loved ones
— Agama Indomie (@Agama Indomie) 1541761770.0

If we are what we eat, Indomie can say a lot about Nigerians. It can say they are quick, that they can sting. Most interestingly to me is that it says that Nigerians are keen on exercising their will. They take a thing and remix it to suit their needs and contexts, much like what Lagosians have done with English. Next time you're in Nigeria be sure to try this neo-traditional dish, you won't regret it.