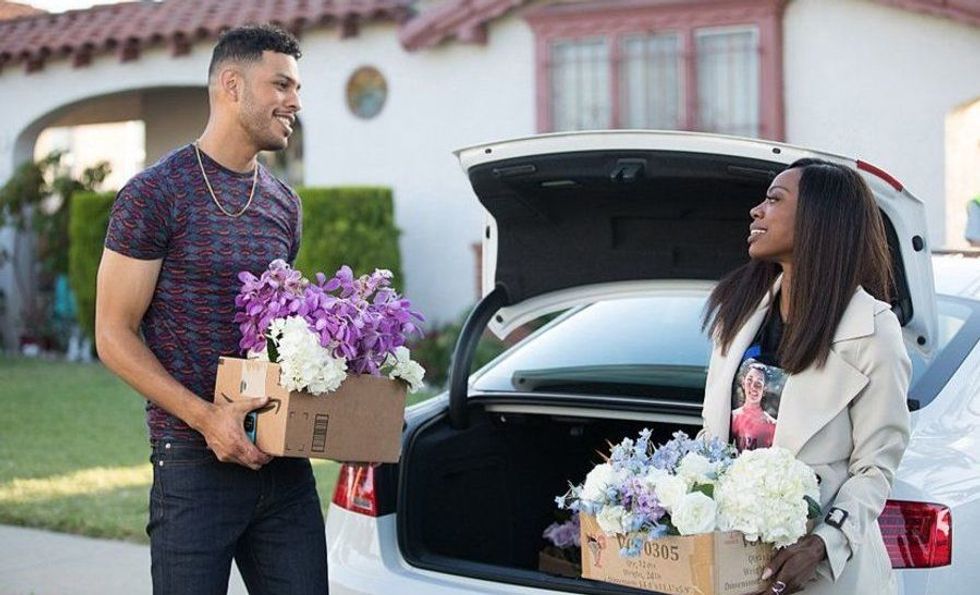 What’s clever about this episode of 'Insecure' is how our favorite characters confront their mini earthquakes.

ICYMI, here’s the recap for Episode 4.

Besides Insecure starting 15 minutes late this week (which had me hella shook around 10:34 p.m. when my HBO GO wasn’t updating with the new episode), and a lovely, but not surprising, closing scene, I personally felt this episode was unexciting. Yet, that's perfectly okay, because it would be unrealistic for me to expect every single episode to be filled with twists and turns, especially since we’re at the very middle of the season, and new plots and conflicts need to be planted so that there can be a climactic finale.

In “Hella Shook,” our beloved characters found their personal worlds, values and beliefs, shaken up by forces out of their control. What’s clever about this episode is how they confront their mini earthquakes: space and setting play crucial roles for our heroines and heroes, as they all spend most of the episode in singular domains. Issa floats between the We Got Y'all staff retreat, her car and Daniel’s bed, while Molly’s storyline takes place at her parent’s vow renewal in her childhood home. Lawrence’s setting is the most boring of them all—jury duty—which makes sense as to why his mind goes idle. Although space worked for storytelling, as a viewer, it felt as if there was too much room for ideas to roam—or get left hanging in midair. But, as I said before, the writers must be arranging ideas that will make sense in the future.

Issa is working on her hoetation. So far, she’s got Daniel, neighbor bae and Nico, the hot older man she goes on a date with, on her roster. Obviously, she has the most chemistry with Daniel, who is still sensual and fun as ever, but Issa fears that once again, they may not be on the same page. After crashing her car, Daniel rushes to the scene to pick her up. “You know I got you,” he says, while they hold each other. It is then that she has to clarify that this is only a casual relationship—she is openly seeing other people, and hopes he is too. Can’t knock her for being honest, Daniel! But I feel for him. I just took an Insecure character quiz on BuzzFeed this weekend and learned that I’m Daniel. Translation: I’m a music producer with a tight ass.

Daniel is shook because, I’m sure, he has feelings for Issa. But, Issa is shook because Frieda, her woke white coworker, is challenging her views on prejudice people of color. When Issa tried talking to Frieda at the work retreat, she's met with a cold shoulder, until Frieda finally reminds her why she's upset: because Issa is failing to acknowledge Principal Gaines’ prejudice, or make their program more inclusive. “So you're saying I can never call out when someone of color’s doing something wrong?” she exclaims. This is the hypothesis of their conflict: can white people call out people of color?

In “Hella Shook” our beloved characters found their personal worlds, values and beliefs, shaken up by forces out of their control.
This is a complicated storyline line because there’s several layers to dissect. Issa is wrong—she shouldn't be excluding Latinx kids from the program, just to appease her company and meet the quota of kids to keep it running. Principal Gaines is in fact, prejudiced, and is using his power to dictate who can participate in the program. Frieda is right about that. But, I think Issa’s main issue is being checked by a white person, which is natural. It is already difficult to discuss matters of race with white people, because most of the time it is people of color explaining why something is painful or problematic. In this situation, Frieda is doing the explaining and the schooling, desperately trying to point out a double standard in Issa’s ideologies.

I get it. It's uncomfortable when a white person tries to tell us something about racism or prejudice, because these are systems they created that they benefit from. However, I don’t think this is a case of whitesplaining. Frieda seems genuinely invested in practicing diversity and fairness at We Got Y'all. Right now, Issa is more invested in getting things done, and with the racial politics involved and career at stake, it's hard for her to simply take Frieda’s advice to find a better, more inclusive solution.

Lawrence attends a call for jury duty and I almost fell asleep writing that sentence. Naturally, as jury duty is such a tedious place, he finds himself scrolling through Facebook, where he stumbles on a picture of Issa and her friends at the diner last week. What stands out is the candid moment between Issa and Daniel, who smile and gaze at each other in the background. Now, I would also be pissed if I found out my ex is still seeing the person they cheated on me with. It's a major slap in the face that would make me wonder how long they were seeing each other while we were together. Lawrence goes to his friend Derek (Tiffany’s husband)for advice, and THANK GOD, he is the first man in Lawrence’s life to give a more nuanced opinion of the situation.

While Lawrence’s friend Chad encourages him to hoe, be angry and move out of his living room (these are valid responses, but with Lawrence, it led to him disrespecting Tasha, which is unacceptable. Hoe and be angry, but don't hurt nobody!), Derek is the only friend who tells Lawrence he had a role to play in the downfall of his relationship. “Honestly, this ain't all on Issa. You spent two years unemployed...kind of left the door open...I can see why she’d be attracted to a guy who’s out there, making things happen.” Of course, that isn't an excuse for Issa to cheat, but Derek’s perspective envelopes what I've been thinking this whole time: that it takes two to make or break a relationship, and Lawrence’s wrongs are a lot more subtle and enduring than Issa’s.

It’s notable that Lawrence only has two close male friends in this show, but they are complete opposites from each other: Derek is married while Chad is doing him, but at moments it's unclear if he is also in a relationship. In actuality, we need friends of all backgrounds and perspectives to give us a well rounded view of ourselves and who we choose to be, but Lawrence’s options are polar opposites, leaving him little room to reflect and grow. Although his new coworker friends seem promising, Lawrence keeps most of his feelings to himself, which isn't unusual for men, especially black men.

What’s clever about this episode is how they confront their mini earthquakes.
While Issa processed, and is still processing, their breakup head on, Lawrence has taken a different route, which included first suppressing his feelings, hoeing and finally confronting their demise. I wonder how romantic relationships between men and women would be if more men allowed themselves to openly talk about their feelings and seek advice from other men, and to be real with themselves, instead of falling into the typical patterns of masculinity that society deems acceptable.

Molly, who is spending her time between Chicago and LA, realizes that the Chicago branch is more diverse AND has the hilarious Lil Rel Howery (I'm still shipping this relationship). He suggests she moves to their office, or any other company where she will feel valued, and slides in the fact that he hasn't eaten yet—am I the only one who caught that he was insinuating a date? Anyway, I don't want to see Molly move to Chicago, because that would change her dynamic with Issa, but perhaps she’ll move to a new company in LA instead.

Molly also prepares for her parents’ vow renewal at their home. This puts Dro, her childhood friend who is in an open marriage, in her path once again. Here, he is juxtaposed against Lionel (Sterling K. Brown’s character), the handsome, sophisticated and accomplished man who Molly has no chemistry with whatsoever. Dro, who is adorable, tall and hilarious, connects with Molly on a deeper level because of their history, and also because Molly is a goofball at heart, who just needs a chill, funny guy to balance her boujie.

Yet, while Issa’s world is shaken because of racism, and Lawrence’s because he’s realizing Issa is moving on and that he has faults in their break up, Molly’s world crumbles the hardest. Through a slick comment made from her aunt, she learns that her father cheated on her mother. Heartbroken, Molly confronts her parents, to which her mother explains that Molly’s father made a mistake a long time ago, and that she willingly stayed and forgave him. Although this shows her parents’ tenacity and commitment, this isn't something Molly wanted to hear, especially while she’s dealing with her own guilt for feeling Dro, and her personal anxieties about getting married.

The episode ends with Dro, the closest person to Molly right now, consoling her in the comfort of her bed—ha! I mean they banged it out, passionately. I'm proud of Molly for giving into her feelings, responsibly, although I'm sure she still believes she is committing infidelity. A big part of growing into ourselves is denying the black and white ideas that society and culture has laid out for us, and creating our own personal maps to achieve happiness and fulfillment in our lives. It’s something I work on daily, as I realize that my friendships and relationships have been far from simple my whole life. But it’s about living with the choices we make, and being at peace about it, without judging or blaming ourselves, that helps us live an honest life without restraints. I hope Molly can find that.