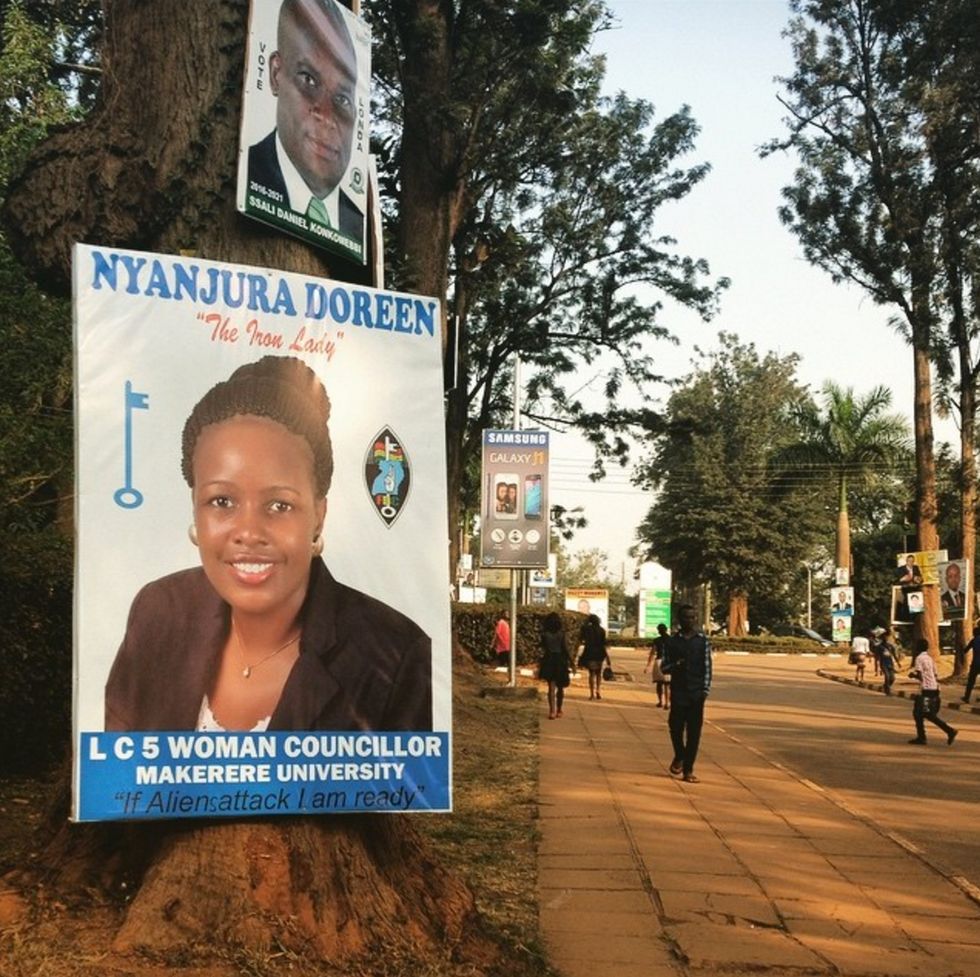 Meet the Iron Lady of Uganda, the 26-year-old grad student running for office in tomorrow's election.

Last week a Ugandan campaign poster with the slogan, “If aliens attack, I am ready,” went viral, causing people worldwide to speculate on the candidate’s sanity. Okayafrica reached out to the woman behind it — a 26-year-old Makerere University grad student Doreen Nyanjura who is running for LC5 Women Councillor—to find out why she is ready to fight extra-terrestrial beings.

Turns out the activist and author is anything but a crank. Nyanjura broke down the meaning during an early morning phone interview: “It’s just a slogan to portray who Nyanjura is,” she began. “[The alien reference] is just to portray the iron lady in me. I am just talking about anyone who does not wish the Makerere community good. Anyone who is trying to exploit the students and the community in Makerere.”

The outspoken leader has experienced police brutality on several occasions, and even revealed how one policewoman slapped her. “I had to slap her back,” she shared. An arrest in 2014 at Old Kampala Police Station, stands out to the student leader because authorities denied her food and access to lawyers.

Hailing from Western Uganda and the eldest of six children, Nyanjura spoke warmly of her family despite some initial resistance from her parents. “Every time I’m arrested, [my siblings] will be at the police station for me, they’ll bring food. They are very caring,” she said.

The FDC is Uganda’s largest opposition party. The message of change and criticism of the Museveni regime, notably in the 2012 book, Is it the Fundamental Change, earned Doreen the reputation of being tough. “For a very long time, I have been preaching the gospel of change. I have been longing for change in this country, hence the [nickname], the Forum for Democratic Change (FDC) Preacher” she said.

It’s her hobby that gives insight on her nicknames and political approach: ”When I’m not preaching, I’m reading a book. I love political biographies and autobiographies,” she said, adding: “[Malcolm X] is my hero, he inspired me to be an iron lady. I love Winnie Mandela and Patrice Lumumba because of their radicalness.”

Doreen’s experience is not just limited to the university campus. As the National Coordinator for the National Association of the Unemployed, Doreen is passionate about working to help graduates land jobs. At least 62 percent of Uganda’s youth population is unemployed, according to Action Aid, although other sources quote the figure as 83 percent.

From supporting students doing business on campus, who faced the threat of being kicked out, to peacefully protesting with support staff and teachers over lack of pay, Doreen is involved in campus affairs. “I’m in this race to protect the interest of such people," she said, "So when the aliens come and threaten to get rid of these people, I will be ready for them and I will not let that happen.”

On February 18, Ugandans will go to the polls and vote for the next President. The International Relations and Diplomacy student is vocal about the need for change, saying of the detained opposition leader Dr. Kizza Besigye: “I’m encouraging Ugandans to be ready for change, I’m encouraging Ugandans not to be intimidated by anyone because this is their country, I’m urging all Ugandans to vote for Dr. Besigye.”

The Tony Robbins fan talks like the motivational speaker would, with optimistic utterances: “I really believe this is my destiny. Even when I say: ‘let me just give myself a break,’ the prevailing conditions can’t let me do that.”

It’s clear the iron lady is confident in her call for change on a national and community level. Just to make it clear, Doreen says: “Me I’m a Makererian for life.”