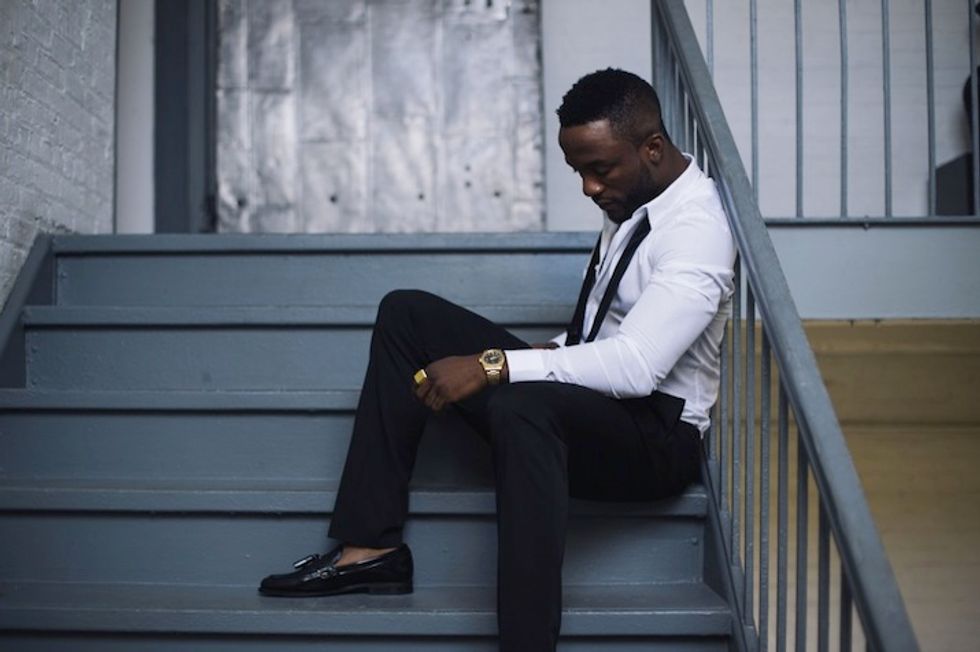 Iyanya is the Calabar-born entertainer behind some of Nigeria's most infectious dance ballads, like "Kukere," "Ur Waist," "Sexy Mama," "Away," and "Le Kwa Ukwu," since making his full-length debut in 2009. With two solo albums and a recent collaborative LP with his Made Men Music (Triple MG) label now under his belt, the Nigerian recording artist is set on making waves internationally. Okayafrica contributor Jacob Roberts-Mensah caught up with Iyanya last week in London, where he recently set out on a UK tour with his Triple MG family...

Jacob for Okayafrica: First of all, congrats on the new single ["Mr. Oreo"]:

OKA: What was it like filming the video out there in NYC?

Iyanya: I was on tour and found that everyone started spitting the words of the song left right and centre everywhere and we just thought yeah people like the song so let’s just do a video but let’s do something different because we are in the states, let’s take it easy and simple

OKA: Do you have many connections out there in the states?

OKA: We know that you are trying to break into the mainstream, so what moves have you been making to make this happen?

Iyanya: There’s a couple of songs that I’ve done with Angel and I’m also looking at doing collaborations and productions with other UK artists, like Sneakbo and Wretch 32. I’m just trying to reach out and I believe God that by the end of this year or next year we’re gonna be working with one of the labels over here [in the UK].

OKA: Are there any artists from NYC that you reached out to while you were there or would like to work with?

Iyanya: No not really… In ATL yeah

OKA: Which artist from ATL?

Iyanya: Future…yeah a couple of guys in ATL.

OKA: Were you able to get in the studio with Future?

Iyanya: Oh no I didn’t say I met Future, I said in ATL he’s someone I wish I met. But I met R.Kelly. It was his birthday but we didn’t do anything in the studio, but I would definitely like to work with him on my album.

OKA: Oh wow I think I read that he was one of your influences.

Iyanya: It was a blessing to meet him, and to be at his party it was like a dream come true for me.

OKA: Do you always try to top the success of "Kukere" with every new song you drop?

Iyanya: Hey bro I’m just doing music man, I’m just trying to make sure that I’m out here for as long as I can be. I can’t just wake up everyday saying “my aim is to make a song that beats Kukere,” then I’m just gonna be on that for a long time but if you make good music it will always speak for itself.

OKA: You started off with rap, R&B and now "afrobeats." What made you move through these sounds and genres?

Iyanya: It’s me challenging myself and also knowing that every artist has to be versatile, and the place that I worked too, where I did karaoke, also exposed me to a lot of genres– rumba, salsa, all that stuff. I was singing all those songs, all that Frank Sinatra, Opera and stuff, so I am just ready to do anything right now.

OKA: What are your top three songs to perform?

OKA: How do you find your reception over here in the UK?

OKA: What's your favourite city to perform in?

OKA: What exactly is your involvement with Made Men Music Group?

Iyanya: I co-own Made Men music with my manager. We have Selebobo, Tekno Miles, we have Baci, we have Emma Nyra.

OKA: Can you tell us about these artists?

Iyanya: Everyone on there is signed and doing well for themselves and they are dropping hits. Selebobo is one of the baddest producers in Africa, and he has written and still writes for a couple of known artists in Nigeria, including myself.

OKA: Do you have a supervisorial role? Produce?

Iyanya: I don’t supervise, we all work as a team. They give me ideas, I give them ideas, we all just come together to make sure it’s a good song/album.

OKA: What was the process like for this album [The Evolution]?

Iyanya: I’ll say shout out to Selebobo on this one because he produced like 90% of this album. Most of the time it was just him saying “oh I did this beat, come and hear it and put a verse on it” which just made things easier for everybody.

OKA: Was there an overarching theme? With a name like The Evolution I thought it had something to do with how you guys are about to change the music industry or something like that?

Nobody said “The Evolution” album was to change the scene. We all said The Evolution album was an album put together by a group of guys that have come together to make history. It’s just what it is. We didn’t put it out to compete with other labels. It’s just us doing our music.

OKA: How long did the album take?

Iyanya: A couple of months

OKA: Where did the name Made Men Music Group come from?

Iyanya: It was me and my manager saying “yo we got nothing right now but we are made still.” It was all a dream and we are label owners now and doing big things.

OKA: What moves do you feel you are making to push the culture of Nigerian and African music forward?

Iyanya: The only thing I am doing is being me, staying original, and working on my sound. Recreating it. Maintaining it. That’s the only thing I can do to represent African music. And also look out for young people that I inspire and say I can help them maybe with collaborations, productions, with lyrics…whatever

OKA: What young artistes have you seen that are good and that you would like to shout out or help out now?

Iyanya: Man… there’s too many… The talent back home is incredible, I don’t want to mention any names right now but trust me there’s a lot of young guys out there doing stuff.

OKA: Who do you study when you're trying to get to the next level? Who inspires you?

Iyanya: Jay-Z because his confidence is just incredible and you have to be a boss to have that kind of confidence. Kanye too, he’s bold and he says how he feels. Ryan Leslie is too talented he’s one of the world’s greatest songwriters, producers, and performers… these are people that I watch. Also Tyrese… doing good with his music and his movies. People like Don Jazzy. I’m not saying that for people like Don Jazzy I know (exactly) how he started, but I know the story. So you have to respect him and look up to him. He is a big brother and he is humble too.

OKA: What are your favourite Jay-Z and Kanye West records?

OKA: With guys like Ryan Leslie that’s a very good, but also very interesting choice, just because to the layman he hasn’t dropped anything new. Although he’s still a genius in the studio...?

Iyanya: He doesn’t need to drop anything new to be Ryan Leslie, he is Ryan Leslie. He will always be remembered because he is incredible bro! This guy plays all the instruments, he records himself, he does his harmony by himself, he writes his songs himself he writes hits for other people... what else? He dresses well, he carries himself well, he’s just…he’s amazing.

OKA: Last thing... what's your work ethic in the studio. Are you the kind of person that’s there all the time and doing 5, 6 songs in a row?

OKA: Or do you drag it out?

Iyanya: I just go in! So many times some songs that you record won’t make sense, but as an artist just never stop recording, that’s what I believe. No artiste has any excuse as to why he should be away from the mic for long. It's your life. It's the choice you’ve made. So the only way you can be better is, “oh yeah I recorded this,” and it’s nice and you play it to somebody and they go “oh so you can actually change this?” That’s how you make hits.

Made Men Music's 'The Evolution' is out now and available on iTunes.