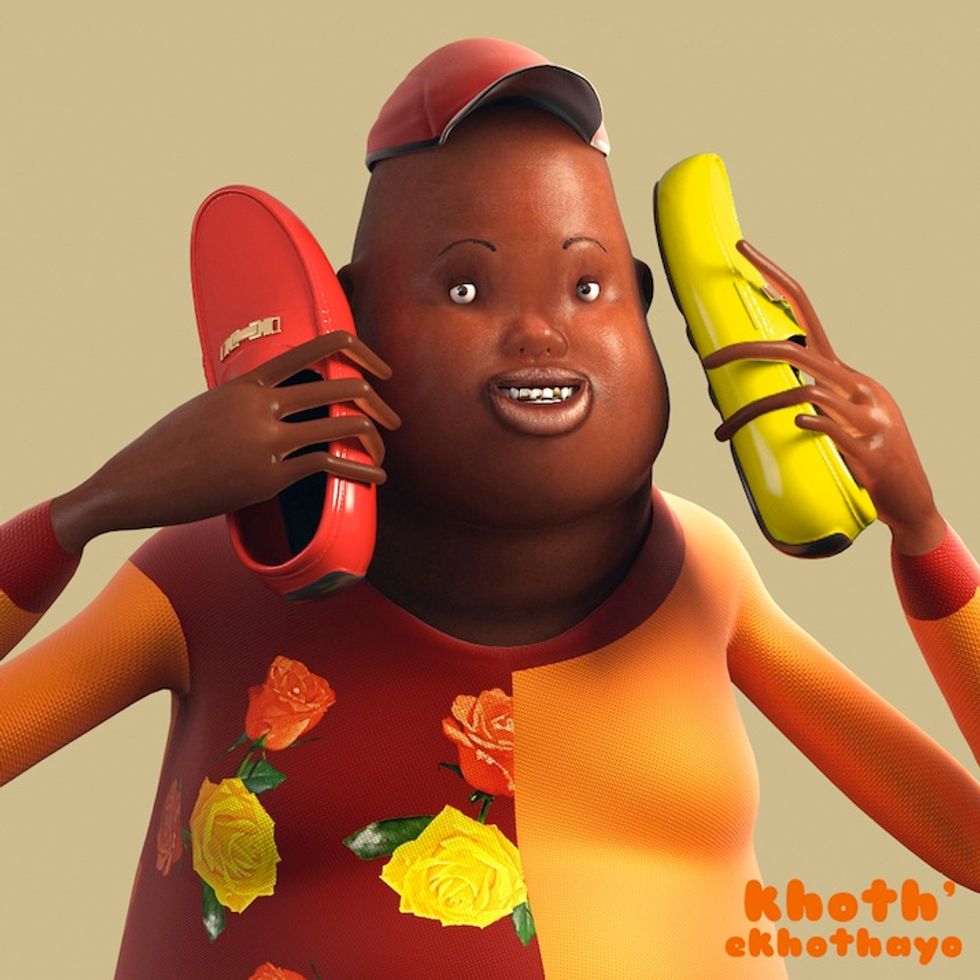 All images via Behance

"Khoth’ ekhothayo is an animated show of the daily endeavours of izikhothane," Soweto-based 3D artist Linton (Hlanganani Nkambule) wrote us in an email last week. The project, which he's been working on with Johannesburg-based animator Mell (Melikhaya Ntlangeni), portrays a group of young South Africans he says "found joy through wearing flashy Italian clothing and using it in performances of showmanship with dance." According to Linton, the lifestyle became popular in South Africa a few years ago but has since died down. "We wanted to ignite that flame again and make them more acceptable to the public through cartoons that would perform some of their not so acceptable behavior to the extreme and in a comedic manner," he told Okayafrica.

"We chose to create Khoth’ ekhothayo because we wanted to create something truly South African, in the sense that it is a comedic representation of a South African subculture that already existed that people could not necessarily relate to but could recognise," Linton says. "It’s also because there aren’t that many 3d animated cartoons in South Africa that show how we can use our own culture creatively and showcase it to the world." He and Mell are currently in the process of storyboarding the project's first animated skit, which should be out in the next couple of months. In the meantime Nkambule spoke with us over email about his work animating South Africa's izikhothane subculture.

Okayafrica: What is the role of music in Khoth' ekhothayo? Who is Nkuli?

Linton: Yes, the music was Nkuli's contribution to the project. Full name is Nkululeko Cekiso, who is also an animator by profession, self taught beatmaker, based in Johannesburg. He's working on a full EP, and the current songs serve as singles. He also had this to add, "The Khoth' ekhothayo project is one of the platforms I always dreamed of being part of, creating content that will speak to what South Africa and Africa are about, and creating a sound that will present the characters and the lifestyle they represent was quite a challenge and overwhelming. I had an opportunity to be innovative with sound... to do what I want."

Okayafrica: What do you mean by the Izikhothane's "not so acceptable behavior?"

Linton: Like in anything in life it comes with a negative side, their lifestyle sometimes includes wastage of their clothing and personal belongings, which has been shunned by South Africans and their culture as a whole because of it.

Okayafrica: How do you plan to portray their daily endeavors?

Linton: Their endeavours in the skit comedy show would incorporate the two characters dancing and battling each other. While the one (Bullet) tries to push an extremists agenda and the other (Gwinya) not being able to afford the extremists lifestyle, but being the friend he performs half measures. The show would usually end in a comedic tone showing how it's not desirable to be an extremist.

Okayafrica: What is Izikhothane's presence in Soweto like nowadays?

Linton: Every week I see someone dressed in a "Skhothane" shirt. The floral shirt has become what baggy pants were/are to hip-hop, a representation of a lifestyle.

Okayafrica: How would you describe your work's aesthetic?

Linton: I try to do pieces that involves exposing things that I think society is ignoring and try to execute it in a style that hasn't been seen or not popular.

Okayafrica: What are some projects you've previously worked on?

Linton: I haven't worked on too much being a young artist. Most of my work is sitting on my computer marked "Work in progress," which I work on bits at a time, some of which are collaborations with other artists. I do have the project named Uthini Boi, which depicts the defiant nature of a kasi (hood) boy.