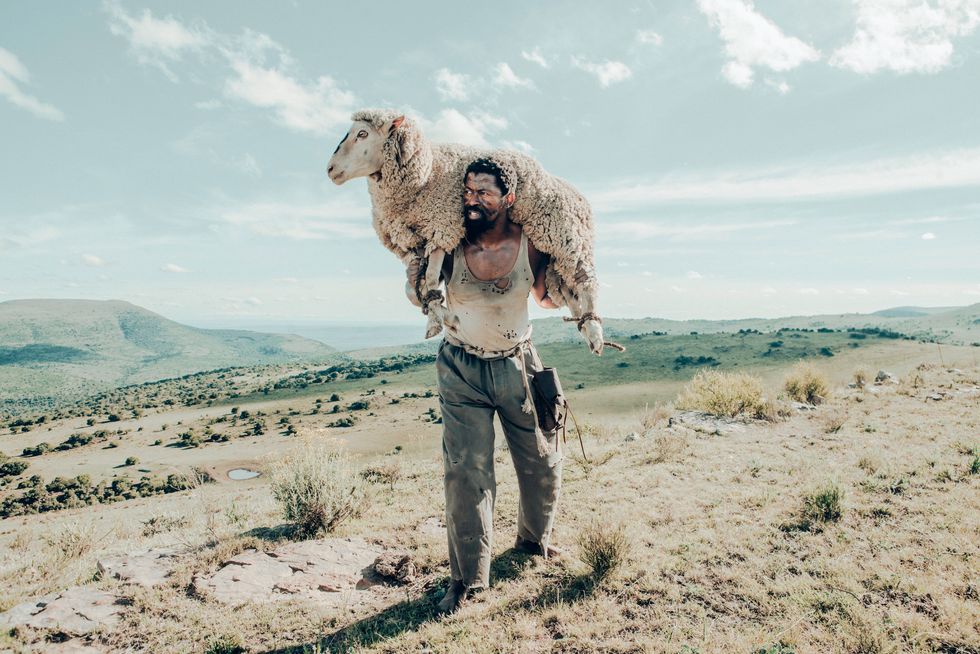 We touch base with the South African director for an in-depth review on his second TIFF premiere, 'Sew The Winter To My Skin.'

The tagline for Sew The Winter To My Skin, a new film by South African director Jahmil X.T. Qubeka—One man's bandit is another man's champion—frames the essential question at the heart of the story. Distinctly South African in flavor, but universal in its themes is what drew Qubeka to reimagine the story of John Kepe, a legendary outlaw of the early days of apartheid.

"I chose the legend of John Kepe—for me, it was a great canvas for grappling with humanity and all its contradictions," he says. "It allows me to take the archetypes and mess with them."

The film made its world premiere at the Toronto International Film Festival and it's the second movie the South African filmmaker has premiered at TIFF. In 2013, his film Of Good Report screened there after it was briefly banned by the South African Film & Publications Board, and withdrawn from the Durban International Film Festival. Qubeka is often dubbed "controversial" because of the blow back, but it's not a label he identifies with. "It's not something I court." Despite the "there is no bad publicity" adage, he says the bad buzz that followed Of Good Report caused more harm than good. In the end, it's just about making movies. "I don't concern myself with overall conclusions," he says. "The minute an audience sees something, it becomes theirs. I consider myself an entertainer."

The story of Sew The Winter To My Skin takes place in the 1950s, not long after the all-white National Party gained power and apartheid became an entrenched system. It covers the last chase of the white Afrikaner sheep ranchers as they close in on the bandit who stole from their flocks to give to the people who were dubbed "natives" in the local press.

According to Qubeka, despite all its peculiarities, you can draw parallels between the conflicts inherent to South Africa and any other place in the world—power and powerlessness; the creation of myths to support the status quo. "It divided people up along race lines," he notes, "there were two realities in the same space. What is reality by consensus?"

When the white Afrikaners ride in on horseback to put up forcible eviction notices to appropriate the land, beating and shooting anyone who protests with the law on their side, the question of who is the outlaw comes into sharp focus. However, Qubeka's version portrays Kepe as a man with his own contradictions. He says he was inspired, in part, by a photograph he'd seen of Kepe, still commanding a powerful physical presence even as he was led in chains to his trial. Actor Ezra Mabengeza embodies that sense of a man larger than life, who fed on his own sense of legend. He called himself the "Samson of the Boschberg." Qubeka wondered how Kepe saw himself, and found a man who refused to disappear into history, crushed by oppression. "No matter how fucked up our reality is, we all want to be etched in the fabric of time."

The movie's cinematography mirrors the emotional tug of the soundtrack, ranging from sweeping shots of Kepe riding a horse at breakneck speed through the gorgeous landscape, to gut wrenching close up shots of a child's face as she painfully waits for the ranchers to pass her by unharmed. Qubeka says he was inspired in part by the look of old westerns. The combination of angles and perspectives is immersive and existential in scope.

What little dialogue there is comes in Afrikaans, ixiXhosa and English—and is incidental as background noise. "The story itself was such a visceral chase," Qubeka says. Dialogue isn't necessary. Actions and the physicality of the white knuckle chase as Kepe continues to evade his captors by a hair become a multimedia experience with an emphasis on a lush and layered soundscape that puts audiences into the scene. You can hear a bug crawling across the rocks, the sheep in the background, and music of various genres ramp up the sense of suspense and ultimate foreboding—we do know the end of this story, after all. Emphasizing the sound and the visuals creates what he calls a "visceral language."

As a filmmaker, Qubeka is inspired by the greats. "I consider myself a big student of Hitchcock," he says, "De Palma to a lesser extent. Their films are a roller coaster ride. They grab you by the throat and don't let go." In Sew The Winter To My Skin, the action flicks back and forth between the chase and flashbacks to how the situation got to that point, the tension ebbing and flowing with the story "to play a game with your audience," he describes it.

As Qubeka sees him, Kepe's was a kind of unintended resistance. "I believe an aspect of it was incidental," he says. Kepe wasn't a conformist to any social creed—he would always stick out one way or another. It was the brutality of apartheid that pushed him into a greater role, becoming something of a prophetic symbol and icon for many "in a place and time that was so viscerally against that," he notes. The director was fascinated with his strength of character. "Where do you get your swag from in 1950s South Africa?" he wonders.

The movie fleshes out Kepe's story with a roster of peripheral characters, including a white journalist who covers the story and a black servant who has mixed feelings about Kepe. Qubeka also includes a feminine perspective. "I became interested in the psychology of the women in his life," he says. In real life, Kepe had wives, ex-wives, and children scattered throughout the Eastern Cape. Qubeka distills that into the character of a single wife with several children, played with wide-eyed emotion by Brenda Ngxoli. Kepe is as much bluster as he is action, taking crazy risks and taunting the ranchers with sarcastic notes. His wife doesn't buy the swagger, though, bringing him down to earth; he feels more comfortable being chased by the cops on horseback toting a sheep on his back than negotiating his time with her.