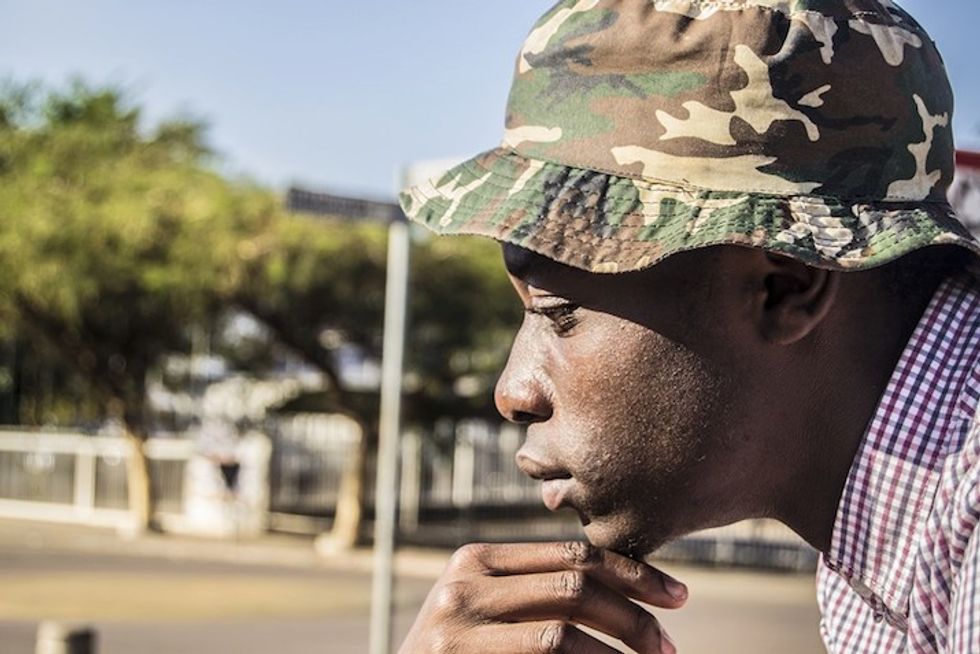 In addition to pioneering his unique brand of 'bacardi house' and recently gracing New York with his incredible sounds earlier this month at Electronic Africa, DJ Spoko also runs a label called Ghetto Boyz Music. His newest signee Jay Carson is a Pretoria native with a mission to deliver a fresh, new perspective to South African rap. After linking up with record producer and childhood friend Gustavo, Jay Carson began crafting his sound within a larger collective of local musicians known as PaperKlip. At some point he was introduced to DJ Spoko and, together with Gustavo, Jay Carson completed his first EP entitled Futuristicart. The EP's lead single "Me & My Niggaz We High" features a blistering, warbling bass-line with a drum cadence that's somewhere in between UK grime and trap. We had the opportunity to speak with the up-and-coming Jay Carson below.

Okayafrica: How did you and DJ Spoko link up? Can you describe your first time meeting him?

Jay Carson: Yoh!!! Actually me and DJ Spoko, we come from the same 'hood "Phelindaba." I knew this friend of DJ Spoko called Phillip and that guy really had the belief that my music could go viral... so he was like, "Lets make some time. I can take you to some guy that can help you out," and that was Spoko.

The first time I met Spoko I was assuming a lot — thinking that maybe my music won't really relate to his thoughts. At that time I had a mixtape. When I got to Spoko's place everything was cool, it was sort of a session of brotherhood. We spoke about basic stuff like getting to know each other and I handed out the mixtape to Spoko, then he played it on his laptop. When everyone was listening someone was like, "Is that you rapping on this track?!" At that time I received compliments to my work that I've never heard. Spoko heard what I wanted and needed, and knew where I was lacking so he was very helpful.

OKA: What sounds inspire your music? Who are some artists that have directly influenced your music?

JC: Futuristic sound and nothing else. Most of the people that influenced my music are based in South Africa like, Spoek Mathambo, DJ Spoko, Gustavo, Okmalumkoolkat. Those are the future sounds of Mzansi.

OKA:  In your opinion, what's the music and cultural scene like in Pretoria?

JC: Honestly speaking, the music industry in Pretoria is growing, but most of the musicians, they all want to do the same thing. They don't really get the point of creativity is the best way on this game.

OKA: How would you describe your sound and what was the inspiration behind your debut EP?

JC: My sound is something that is based in the future. Something that could be played inside a UFO. What really inspired me by working on the Futuristicart EP is that I wanted to do something different — something that nobody has ever heard before unless  you've seen the future or been to space!

Watch the music video for Jay Carson's "Me & My Niggaz We High" and stream the track above. His 5-song Futuristicart EP is available on iTunes.