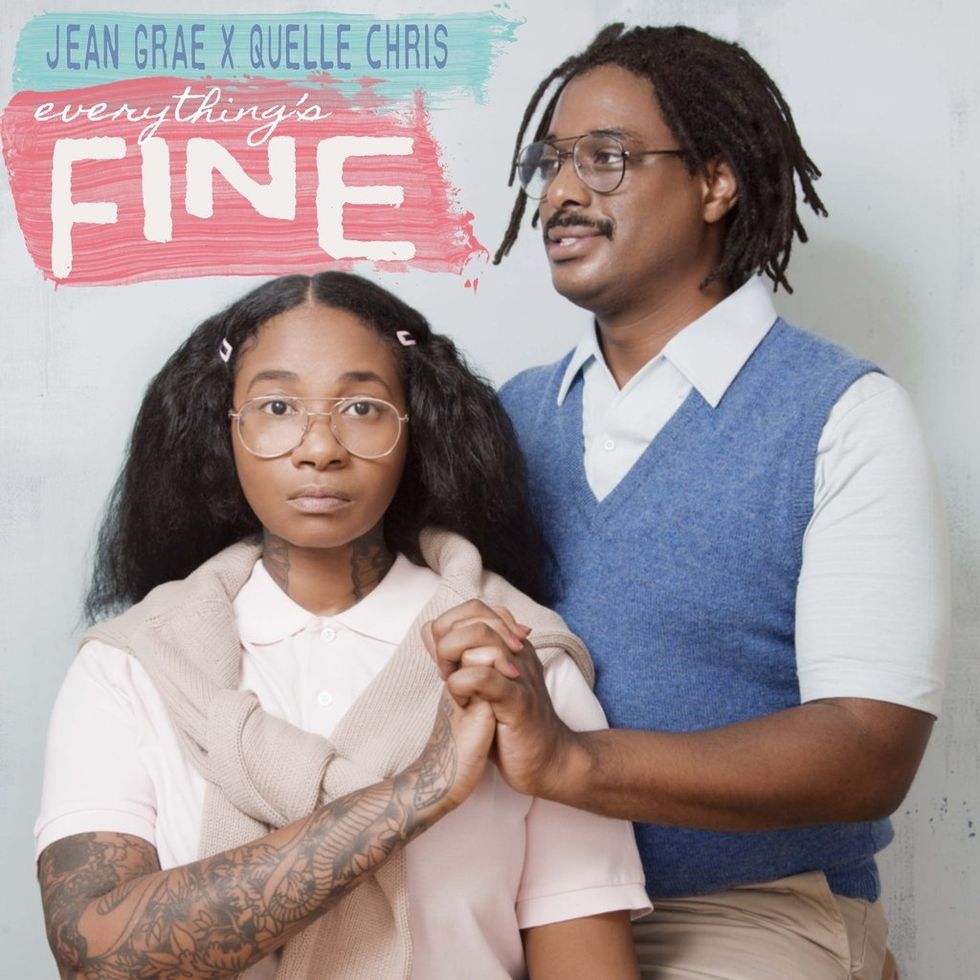 Jean Grae and Chris Quelle try to make sense of our existential crisis on 'Everything's Fine.'

New York-based South Africa-born rapper and producer Jean Grae's discography is extensive. She has released more than 20 albums and countless mixtapes and EPs. The latest addition to her rich catalog is a collaborative album with Chicago rapper and producer Quele Chris, who is equally prolific.

The song "My Contribution to This Scam" pokes fun at the self-important characters we encounter in the 21st century, from insufferable old school hip-hop heads, to YouTube reviewers and Instagram models, among others. Jean uses one of her old tricks—her voice shape shifts into the characters she is portraying which creates a humorous effect.

The song "Gold Purple Orange," challenges stereotypes and homogenous thinking, which are both perpetuated by the Internet. "Everybody alt-right gotta be white/ Everybody disagree gotta be wrong," Chris raps.

"Every mixtape dropped gotta be free/
Everybody from the hood gotta be G/
Everything in the news gotta be real, right?/
Every Jew, golden rule, gotta save bills/
Every young nigga gotta deadbeat daddy/
Every independent lady attitude trashy/
Anybody ain't lit gotta be old/
If you dressed like that you gotta wanna fuck"

The duo doesn't just stop at mockery, however. The song "Breakfast of Champions" sees them spitting their most poignant verses on the album. They speak on police shootings. "It's bound to wreck your body or straight burn your body out," raps Quele. "You just another angry nigga shouting, what you pressing? Why you pouting?/ Why we singing 'We Shall Overcome' in the 2000s?/ Devil's tryna turn this car around, but we've been asking 'are we there yet?' for the last 400 miles"

"C'mon, how much more evidence you want?/ You think you could use your privilege like a human shield in front?/ Without the Pepsi, miss me, I pray the bullets miss me/ But you not about that life, so let me tell you how this shit be."

And while covering all these issues, Jean, Quelle and their guests (rappers Your Old Droog, MosEL, Denmark Vessey, and the singer Anna Wise) never fall short at entertaining. The production, which is handled by Jean and Quelle, is mostly lo-fi with nuanced variations like the West Coast funk influence on "House Call."

The warm and hazy pads that define most of the beats play the best cushion for the lyricism that at times can be dense and requires multiple listens to grasp. Jean's verses especially require undivided attention from the listener, as she's such a technically correct MC. She raps "Can't hurry something so complete," on "Gold Purple Orange."

But what makes Everything's Fine stand out from most rap albums that can be labeled "conscious," is that it provides some solutions. Optimism takes the center stage on songs like "Waiting for the Moon." Anna Wise, on the chorus, sings, "Don't waste your dreams/ It's never gonna be perfect/ Know how it seems doing now/ It's always worth it."

Jean Grae's verse reveals the vulnerability she has shown on her older songs like "You and Me and Everyone We Know," "Keep Livin'," "37" and "Don't Rush Me"—songs in which she doesn't stop at the problem, but proposes an individualistic solution. On "Waiting for the Moon," she reflects on how the death of her mother reminded her of the importance of living to the fullest because your time in this realm is limited.

"Fernanda's mama said 'work hard/ Live hard because your time is short'/ Exactly why I kicked my life into high-gear when my mama died/ Less traumatized than apologetic/ For all the times I waited on some kinda rise-up revolution/ from the people, forget to make me equal/ to level the playing field at least to let me play the game."

"But these two could never play the same/
I should known it from her own shit how/
Polarizing bullshit gender get, race get/
Perception get/
Stay-in-your place get/
Know you role, no regrets/
Connection of your faith in yourself/
And owning it"

The skit "Everything's Still Fine" by Nick Offerman, depending on your character, can be interpreted in two ways. Offerman tells us to not worry about things that don't directly affect us. This could be a jab at society being self-absorbed and selfish. But it could also be a call to you to ease the burdens you carry. Yours are enough, worrying about others' issues won't bring you any good. In short: self-care.

Everything's Fine is a multi-layered album, and its interpretation varies from listener to listener. And just like all great hip-hop albums that have lyricism as the focal point, new things will be revealed with every successive listen.

There's more to say about it, but I will leave the rest to you.