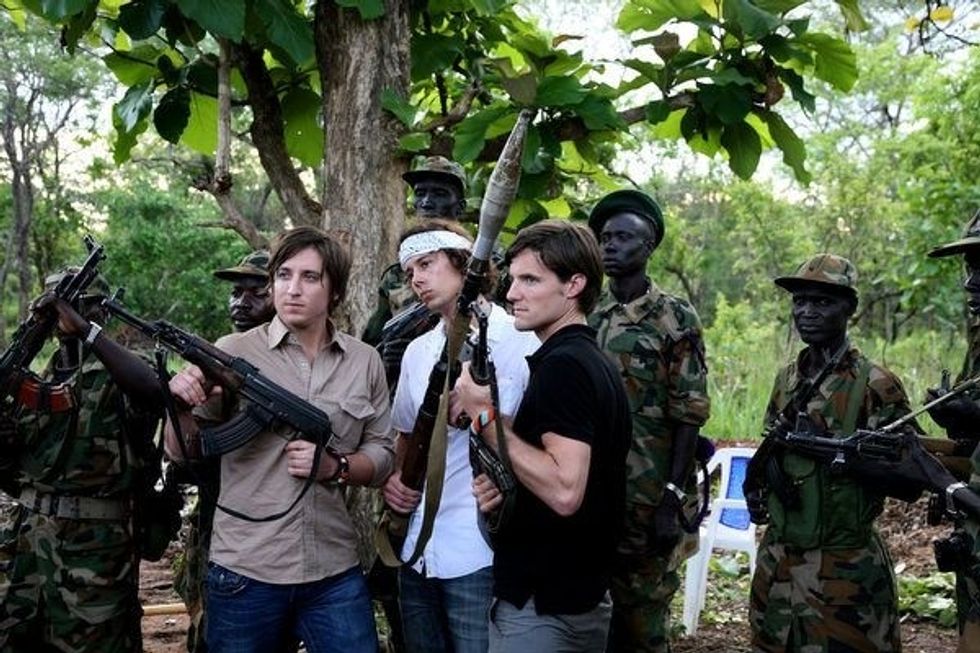 Earlier this week, the non-profit Invisible Children posted "Kony 2012" on youtube and vimeo. Slickly produced and superficially moving, the video purports to raise awareness about the Lord's Resistance Army (LRA) leader Joseph Kony, and kicks off a campaign to #stopkony. Asking people to donate and buy advocacy kits that will "make Kony famous" by plastering signs and stickers publicly, they tell their (young, mostly white) audience that "[p]eople will think you’re an advocate of awesome." Thanks to a tsunami of tweets from celebs and those of us regular people alike (#stopkony and #stopkony2012 are trending), the kits are now sold out.

The Stop Kony campaign and Invisible Children have subsequently come under fire and have become the focus of pointed, and sometimes angry, criticism for their simplified and outdated take on the conflict - as well as their colonialist approach to "solving" it.  Below find links to some of the best critical articles we've seen (which also contain links to other great articles). And above, Ugandan journalist Rosebell Kagumire, weighs in. We'll let her tell her own story. And, to be fair, here is the official response from Invisible Children, which ends with this quote from the "poet" Ke$ha: "we are who we are."

[Editor's note: we included some new sources in the list below on March 22.]

Ordinary Ugandans are worrying about other things. The government needs a strategy for assessing its capital needs by sector. Should Uganda build an oil refinery or forgo the profits and send crude to Kenya for processing? And if it’s Ugandan children in peril you’re looking for, there are those suffering from “nodding disease” — an unusual neurological disease that’s killed hundreds of children in the very region Kony once terrorized....

...Let’s not amplify and reproduce another narrative of Africa in crisis when Ugandans themselves are moving on.

"'There’s also something inherently misleading, naive, maybe even dangerous, about the idea of rescuing children or saving of Africa. It’s often not an accidental choice of words, even if it’s unwitting. It hints uncomfortably of the White Man’s Burden. Worse, sometimes it does more than hint.' -Yale political science professor Chris Blattman"

"But I disagree with the approach taken by Invisible Children in particular, and by the White Savior Industrial Complex in general, because there is much more to doing good work than "making a difference." There is the principle of first do no harm. There is the idea that those who are being helped ought to be consulted over the matters that concern them."

"One of the biggest issues with a simplistic "Stop Kony" message is that discussions of Navy Seals or drone strikes are inevitable when patience runs out with Ugandan-led efforts . But what about the dozens or hundreds of abducted and brainwashed kids? Should we bomb everyone? Will they actually stop fighting after Kony is gone? What if they shoot back?"

While much of the backlash reported in the American news media this week cited objections raised by development experts in the United States and Europe, several African bloggers and activists have objected to what they see as a more fundamental problem. Among them, the possibility that the “Kony 2012″ campaign reinforces the old idea, once used to justify colonial exploitation, that Africans are helpless and need to be saved by Westerners.

Many African critics of the effort to make Mr. Kony, the brutal leader of the Lord’s Resistance Army, a household name said it echoed the ideas in Rudyard Kipling’s poem, “The White Man’s Burden,” written in 1899 to urge Americans to embrace their imperial destiny and rule over the “new-caught, sullen peoples,” of the Philippines — even though the typical native was “half-devil and half-child.”

In the New Statesman, Tom Rollins goes further. He fears that “so many people could be duped by a video that explicitly calls for U.S.-led intervention in Central Africa” — which, coincidentally, could make it much easier for the West to gain access to the region’s natural resources.

"The point of the film is absolutely not to encourage deeper questioning of Ugandan governance. The name of Uganda’s Life President Yoweri Museveni is nowhere to be found. Instead the point is to “literally cry your eyes out”, having been moved into a frenzy of moral clarity by the quite revolting mixture of generalised disgust at black Africa, infatuation with white American virtue and technological superiority, and a dose of good old-fashioned blood-lust."

"I found all of their previous efforts to be emotionally manipulative, and all the things I try as a journalist not to be."

"The problem here is the lack of balance on who speaks for Uganda (and Africa) and how. We need approaches that are strategic and respectful of the local reality, build on the action and desires of local activists and organizers, and act as partners and allies, not owners and drivers."

"You get all the benefits of helping (self satisfaction, telling other people) but no need for difficult decisions or the ensuing criticism (how do you criticize awareness?)."