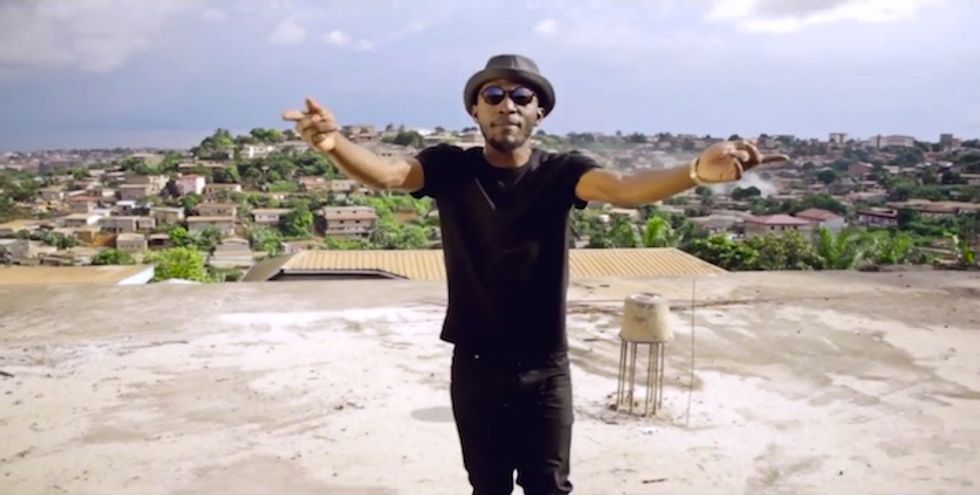 Jovi, one of Cameroon's hip-hop pillars, recently released the video for his socially-conscious single “Et P8 Koi" (which roughly translates to "So What"). The track sees the Cameroonian pidgin rapper flexing his rhyming habits and synth-lead production skills, under his alter-ego Le Monstre. The at-times eerie visuals for "Et P8 Koi" show Jovi tackling cultural stereotypes in Cameroon from the country's capital. When the audio came out this fall, Jovi delved more into the song's subject matter and told us:

Well, my country is really facing this problem due to the fact Cameroon is a country with over 200 Ethnic groups, speaking different languages and sometimes have a different culture. You have neighboring villages that don’t even understand each other because their language and culture is different. And you have two languages that we inherited from our colonial masters: English and French. So this difference in culture and language can sometimes create a lot of division and prejudice.”

My message is you don’t classify people based on their origins or cultural difference, religious beliefs. People are really different. Everyone is unique in his own way, and everyone deserves a chance. This song is my way of helping to bridge the gap that exists between the Anglophones (English speaking Cameroonians) and the Francophones (French speaking Cameroonians). If they can listen to my song together that’s a good start.

Directed by the rapper's younger brother Ndukong, of February 16th Pictures, the music video features aerial shots of Yaoundé with Jovi — posted up on rooftops, streets and in the cut — tackling stereotypes that stem from cultural differences in Cameroon. Keeping in theme with the song's menacing sound & 808 drums, the video comes full circle with its message when a woman in a misplaced TV screen unapologetically questions peoples' intolerance of others. "Et P8 Koi" serves as a more somber follow-up to Jovi's recent electronically-laced album Kankwe Vol. 1," but it still boasts his witty punch lines and social commentary over original productions. Watch Jovi's "Et P8 Koi" below while we await his sophomore full-length.