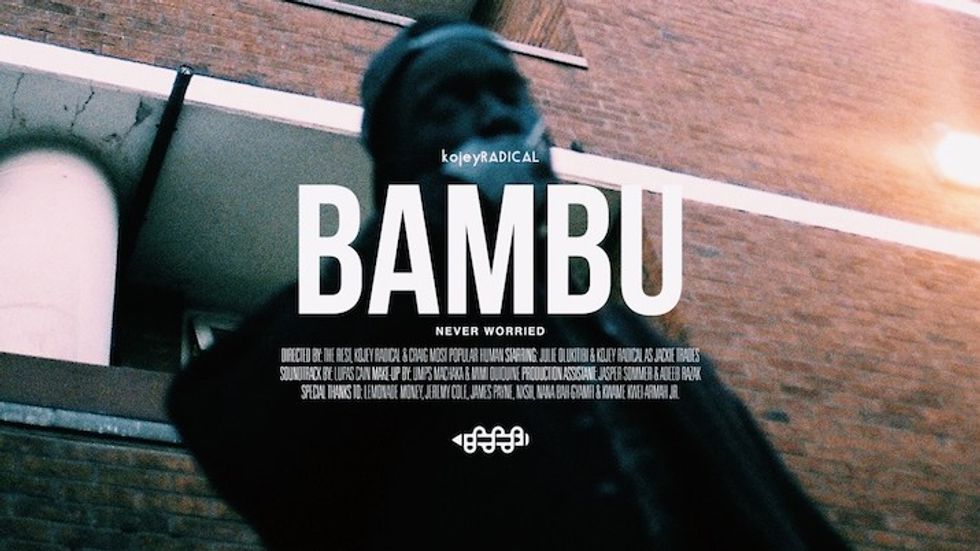 We talk to Ghanaian-British artist Kojey Radical about this "Bambu" music video, the lead single from his EP due later in 2015.

In mid-March, British-Ghanaian artist Kojey Radical dropped "Bambu," the darkly enthralling single from an EP due later this year. The spoken-word artist, poet, and creative director recently shared the song's music video, a starkly beautiful piece of work that shows Radical searching for truth in a gray, money-raining town. As the visuals circulate around the internet, the London-based artist and the video's South African director Alex Motlhabane spoke to us via e-mail about its creation, the meaning of "street poetry," and the relevance the video has for Africa.

Okayafrica: How did you go about making the already frighteningly vivid "Bambu" song into a music video that is even more so?

Kojey Radical: Vision, we had clear intentions when making this video. It wasn't about simply dictating a narrative it was about taking the exact words you've used to describe the visual and using that to paint a portrait. This visual is something we want people to discover and discuss; the pace of music and popular culture these days often causes us to skip over the details. The song already highlights everything I wanted to say about societal and cultural issues; what the video does is offer another perspective.

Alex Motlhabane: We really just set out to put up powerful images to accompany the song. And those references are straight from the song. Everything just came together organically. It's just making sure you shoot them in the right context. Aesthetically the young black woman, the chain mail dress & the money raining down is simple enough but its the connotations that give it depth.

KR: Every scene has a connotation, some even strangely ironic but all the while presented with such an air of serious confidence. We spent a while writing a lot of scenes and when it came down to the shoot days we left a lot of those ideas behind and trusted our voices as young creatives and film makers.