The Zimbabwean contemporary artist recently showed his thought provoking exhibition, 'We Live in Silence' at this year's Dak'Art Biennale.

Kudzanai Chiurai is a Zimbabwean contemporary artist and activist who addresses issues as colonialism, corruption, xenophobia and democracy through his work.

Chiurai uses such mixed media as drawing, painting, videography and photography to tell his stories. His theatrical pieces reach widespread audiences across the world.

When applauded for being the first black student to graduate from South Africa's University of Pretoria with a bachelor's degree in fine art, he is not content. He says this shouldn't be an accomplishment and is revelatory of a flawed space in which people, resembling him, have seemingly been closed out. "Education should be accessible to all," he adds.

It quickly becomes evident that he possesses a fervor to both question his surroundings and spark conversation. At the onset of his career, Chiurai painted portraits and landscapes. When asked how he became an artistic activist, he laughingly says, "What you think you'll learn in uni never quite ends up that way, it's the best way is to broaden your horizons." While in university, he created works centered around Robert Mugabe, his country's prime minister at the time, that would ruffle feathers and bring about his self-imposed exile. Those works would be the beginning an aesthetic distinguishable by its social commentary.

Today, he's based in his native country and has made the riveting exhibition We Live in Silence (2017), from which a video was displayed at Dak'Art Biennale in L'ancien palais de justice. The exhibition is the culmination of a three-part series beginning with 2011's Revelation and 2016's Genesis focused on alternative "colonial futures." 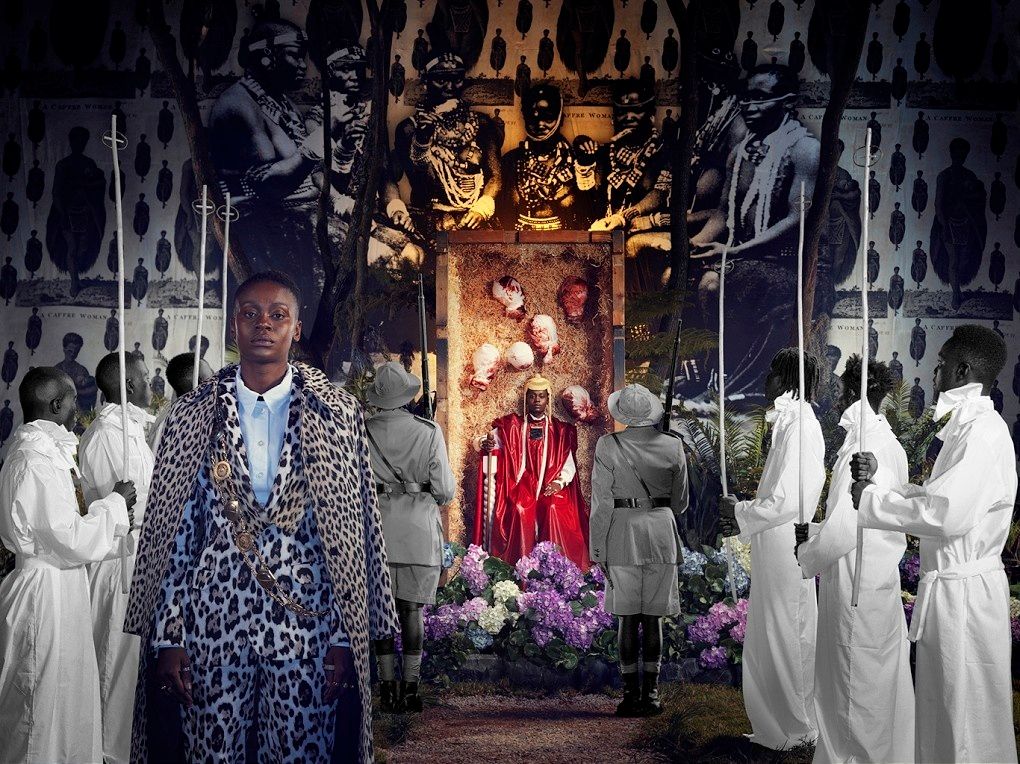 Chiurai stages a colonial history and rejects Africans thinking, speaking and understanding language like their colonizers. He even goes as far as placing women in the forefront of our liberation. Where history is often told from the perspective of the winner, Chiurai reflects on the triumphs of his own with powerful iconography.

The overall series is a response to 1967's French-Mauritanian film Soleil O centered on a black immigrant yearning to find himself and a sense of home in Paris post leaving Senegal. In the film, the main character is so dehumanized by his white counterparts that he goes mad. He faces rejection, humiliation and disinterest. Soleil O fills its viewer with a visceral sense of discomfort and provides a very real look at a reality still experienced by modern day french immigrants.

"We are living in post-colonial societies," Chiurai says. "Afro futures don't exist because of colonialism. We live in colonial futures that are synchronized with capital." African nations, though liberated from the Western world's grip on their land, are still shaped by colonial social and political institutions. These institutions still govern how we live our lives. Currently, we are called "to integrate ourselves in a system that doesn't suit us and abuses us," he says. Chiurai dissects the aforementioned with collages comprised of images from the past, present and future. He places different aspects of our history into one moment in time.

Art provides the rather reclusive Chiurai with a voice. Despite not having social media or a website, he celebrates dwelling in a world where his art is placed alongside that of his peers in places like South Africa's Goodman Gallery. "We no longer have private lives. We don't have 'my,' 'I' [or] 'that.' We have 'we' and 'us,'" he says. "Being on platforms where other artists are is 'us.' Being a part of other conversations. It's not singular, it's plural. In the same way we have not singular identities but plural identities. My work reflects this. It's a shift that is taking place."

If his images have one message, I hold it is this: he is an African championing the continent and propelling its overall culture forward. We'll be sure to follow him as he works on a film and partakes in shows in Sweden and Germany.

Due to the global COVID-19 pandemic, which has seen South Africa and other countries undergo a lockdown, production companies and other businesses are looking for alternative methods to conduct business.