Ghana's Lady Jay On Her 'Trapzonto' Sound & Collaboration With Sarkodie 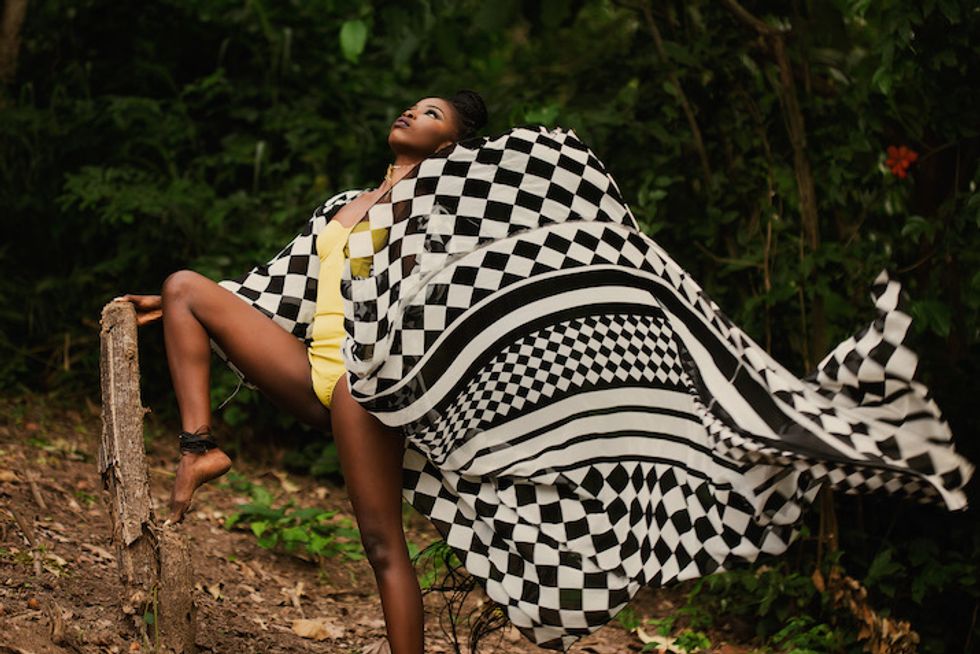 We talk to Ghanaian singer Lady Jay about her bold new sound & new single "Venus" and the lack of a Ghanaian music industry.

Orbiting a musical space somewhere between the likes of M.I.A., Efya, Jojo Abot and the FOKN Bois, Ghanaian singer Lady Jay stands confident and determined to make her mark. With a host of acoustic performances and compilation features scattered across the internet, Lady Jay has spent a lot of time underground. Over the past couple of years she's been through many changes, popping in-and-out of the spotlight while dropping singles like "Oh My My My" on her Soundcloud. After a number of delayed releases, she's finally premiered her bold new sound, inviting Ghanaian star rapper Sarkodie onto the hypnotic single "Venus." The track is a bold release which finds Lady Jay rhyming comfortably over syncopated rhythms, raw synth-bass sounds and programmed drums produced by Kuvie and mixed & mastered by the legendary Panji Anoff. We caught up with Lady Jay at her favourite local spot Bermuda Gardens in Accra, Ghana to talk about her influences, her artistry and her bright future.

Jacob Roberts-Mensah for Okayafrica: How do you feel you stand out when viewed alongside other Ghanaian artists?

Lady Jay: I started a new genre with my producer, Kuvie. It is the Agbadza kind of sound. Have you heard E.L.’s "Agbadza"? It came from the style that I created. I haven’t released the music yet but E.L. went ahead and released his. I respect that at least he’s opened the path for me and Kuvie who are the originators of this sound to really bring it. So big ups to E.L. for releasing "Agbadza," but that sound is me and Kuvie’s sound. We created it and nobody can claim that sound but us. But we have more of that to give the world.

Tell us about your background. Where did you grow up?

I'm from Cape Coast, I'm Fante. I grew up outside, I was raised in England and in America. I lived Tottenham from about 1999-2006, I did primary and secondary school then came to Ghana for about nine months. I then moved to America and did junior year and senior year of high school and then went to BYU [in] Idaho.

Who are you inspired by?

[Goes into the chorus of Venus and laughs] Listen I am badder than Erykah Badu but I respect her a lot and look up to her. I also studied Whitney Houston and a lot of the old 'jazz-ies' like Aretha Franklin. But right now I like the vocals from Luke James, Frank Ocean, Party Next Door, Drake, I think The Weeknd is alright but I’m really into PND. I’m into Dex Kwasi, FKA Twigs, James Blake, Jamie Woon, Pentatonix.

It’s funny you mentioned FKA Twigs, I find that you and her have a pretty similar creative background. She was also a dancer…

Wow! Where is all the music? Will you be dancing at all?

I have so much music now, all I’m praying for is that little push. Because right now I have all kinds of music; I’m rapping I’m singing I’m doing everything... you need to hear that song with me featuring E.L. called "Pancake." This year I will be doing a lot of dancing. I’ve been conditioning my body. I’m looking to go back En Pointe. I shot “Oh My My My” with my old management and I’m looking to reshoot that video.

What are your thoughts on the Ghanaian music industry?

We don’t have an industry.

Are there no good labels, good distribution deals, etc.?

Sweetheart, some of the things you are talking about, are not here. What keeps my music going are my fans, people that believe in me, God, my talent, my music, my spirit. This is what keeps my music afloat. Not even money.

What do you think Ghana can do for artists because as you are saying there is no industry?

My mind isn’t even here, I didn’t make my music just for Ghana, I made it for the world. That’s why I’m not upset that I’m not blowing up or anything, because I know it’s a gradual process. And I am happy I am growing. There is a niche market for the kind of music I’m creating with Kuvie and nobody is creating this kind of music. E.L. having the opportunity to be around when I started creating this music has been able to tap into this flow. He’s a very good friend of mine.

Coming back from the States how hard was it to break into the music scene over here?

I owe it all to Panji (Anoff), Wanlov, Selor, King Ayisoba. All the artists I met when I lived in Pidgen Music for those four years. Sister Deborah -I call her star banana-, JaySo, Efya...

You and Efya are close. How long have you known her?

I went to school with Efya. I’ve known her since I was six. We lost touch but we are very close. I also owe most of my growth to Panji and Funsho [Ogundipe]. He is my Nigerian music father he’s the one I write real afrobeats with. He plays with me when I’m playing in Nigeria for Felabration. I played Felabration four years in a row. Femi Kuti calls me his daughter.

Who else have you worked with?

Can you tell us how "Venus" came about?

Oh my days this seems like centuries ago but then me and my friend, who is also my producer, were chilling in the studio and he had told me he had been working on some sound called “trapzonto.” I know, I know it sounds corny but he actually had a solid idea so I started humming things to this basic sound he had made. [With] the little melodies that had been gracefully leaving my lips and the bursting sounds, [we had an] incredible fusion of energy. The first time I recorded I wanted Wanlov on it. He came to listen to it told me it was bad ass but he never really did his verse, I really don't know why. So then I waited for DexKwasi to come from America because one of the phrases I use in the song was inspired by him.. I felt that it would be good to have him on it because the style that me and Kuvie had found was his style, "trap."

Dex came and recorded a sick ass verse but at that time I was dealing with plenty of problems so I couldn't put it out. I recorded the song again with Jayso where this time it was just me on "Venus." Jayso and Kuvie helped write the lyrics of that song it was then mixed by E.L. and still never came out. In 2014 Venus was promoted but was never put out. I never thought that the collaboration between Sarkodie and I would be possible but God works in mysterious my sister Efya came through and blessed my life for ever since then Panji mixed and mastered it and now it's ready for the world

What the process and inspiration behind this song? What does this song mean to you?

This song I believe is going to be my break. This is the song that will let the world hear me my voice and what I have to say and what I want to bring to the music table when it comes to my country and my continent .This is one of my strong songs of my project with Kuvie but after I drop this the world will know my name and will want to hear what I have to say.

What can we expect looking forward even after the launch.

I'm definitely going to give you guys an EP or LP before the year ends. I will give you beautiful, different, crazy, soothing and lovely sounds. I have so much up my sleeve so just keep an eye on me.