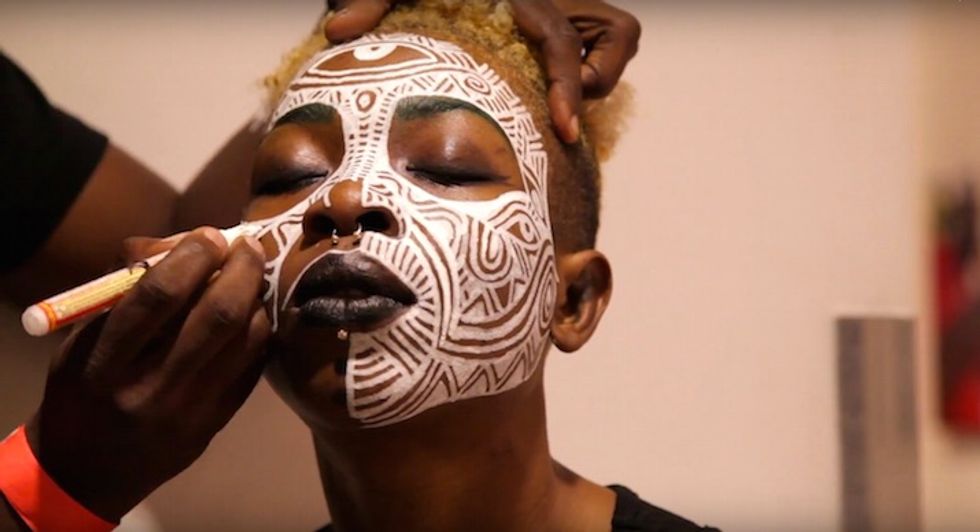 Earlier today we reported on Ori Inu: In Search of Self, a forthcoming afrofuturistic short film that tells the story of a young immigrant woman who must choose between conforming her identity and spirituality to America’s cultural norms or revisiting her roots in the Afro-Brazilian religion known as Candomblé. As the film's producer noted in an op-ed on Okayafrica, the project looks to tackle a number of questions about African spirituality, such as "Why the idea of African spirituality is generally characterized as other or evil, when Greek or Roman mythology is not portrayed in the same light? Why is African spirituality still seen as primitive and backwards, and how could we make a film that reverses these stigmas and shows the relevance of African spirituality in the present day and even into the future?"

On September 12th, the Ori Inu team held a party at the Museum of Contemporary African Diasporan Arts (MoCADA) in Brooklyn to celebrate the release of the film's stunning first trailer. Not surprisingly, the night served as a platform for creatives in the diaspora to showcase their ideas on spirituality. That evening, Nigerian visual artist and musician Laolu Senbanjo performed Yoruba Ritual Body Art as a spiritual ceremony on rising Ghanaian musician Azizaa. The entire piece was filmed by Mariona Lloreta, who turned the performance into a time-lapse that we're excited to premiere here today.

Senbanjo explained the significance of the performance in an email to Okayafrica:

"Art is always at the heart of all we do in the Motherland. We've always used art to express our pains, gains, and vanity. Africa is more than the dark continent, Africa is the source of creative ingenuity, our art keeps us connected with our roots and shines an endearing light to the rest of the world.

The ritual of painting one's 'ori' on them is a deeply spiritual ceremony between the artist and the canvas which is a person. It really doesn't get much deeper than that. It's the most powerful spiritual experience between both parties. Ori in Yoruba literally means head but is so much more than that. It also refers, in the spiritual sense to one's intuition, destiny (ayanmo), essence, and their consciousness that's part of them, and is also an Orisha unto it's own, meaning that the person is a God or Goddess them self. It is one of the most powerful parts of the Yoruba faith. In the Western world you would describe it as your soul + destiny + essence and more = Ori. It's as deep as it gets. Often you might even have a chant/mantra that is connected with your Ori that you sing or say aloud which is like a prayer to yourself and your own soul. Sharing this experience with others as an Artist gives a new meaning to my Art unlike ever before. It's changed the way I see myself as an Artist. It's taking my Afromysterics style of to a higher level. Afromysterics means, the mystery of the African thought pattern."

Azizaa, who grew up between Accra and New York, recently shared her own thoughts on spirituality in an interview with The FADER. "In Ghana, most people believe in following the crowd just to stay alive, not to be scrutinized. There is stigma attached to vodou [voodoo], so Christianity is a very safe choice," the musician told The FADER's Benjamin Lebrave. "But deep down, in their souls, hearts and minds, they can't fight or ignore the voice that tells them to go back to their roots, sankofa, it's the only thing that works. The Christian thing is just another way of slavery taking its toll and Ghanaians copying and pasting blindly."

For more on Laolu Senbanjo's ritual body art, head to his official site. Keep up with Senbanjo on Facebook/Twitter/Instagram.