From Ubuntu to Xenophobia: What It's Like to be Black and Foreign in South Africa 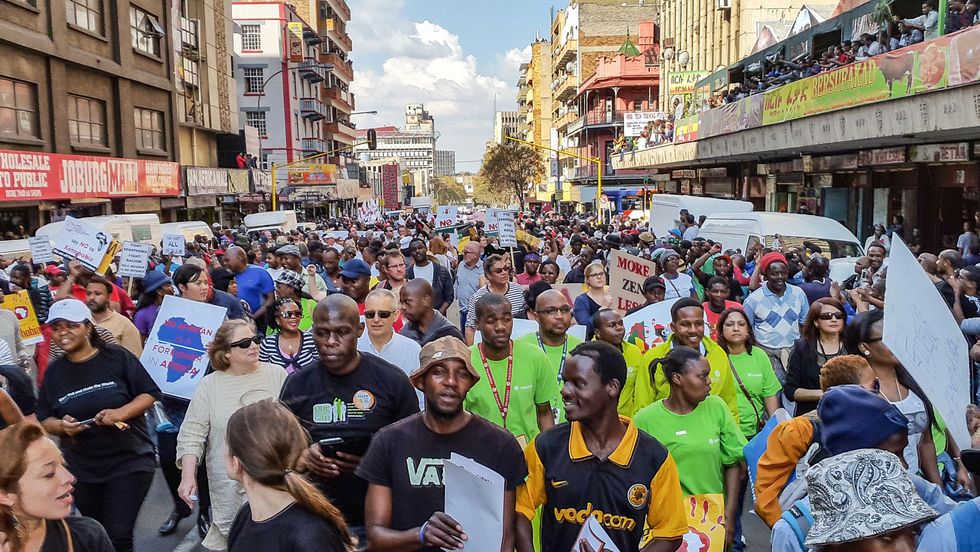 As xenophobic rhetoric re-appears in South Africa, we take a look at what it means to be on the other side of the hate.

If you didn’t already know, part of being black in 2017 involves listening to spiritually uplifting songs, like “Alright” by Kendrick Lamar. So, while rapping along on my way to work early the other morning, I was shocked by a buzz from my phone:

“My people are attacking immigrants again. I heard the news last night and I just want to tell you that I am sorry, babe. Please take care”, read the text message.

My family moved from Kenya to South African when I was six years old, meaning I was 14 during the horrific xenophobic attacks of 2008. Before the mass eruption of xenophobic violence, I knew that black South Africans were terribly frustrated when I asked them to “please speak English, I cannot understand you.” And why not? We should be able to speak in a non-colonial language. But the xenophobia on display in 2008 left me in disbelief.

It was the images of Ernesto Alfabeto Nhamuave’s burning body that made me see this “deep dislike” for what it was—hate. Like Ernesto, you could be an immigrant, legally admitted into this country, you could be minding your own business and you could still be beaten, stabbed and then set alight. Your murder could even occur in broad daylight and there will somehow be no witnesses or suspects, nobody will be held accountable and the case will go cold, all because of your nationality.

Of all the new South African things I fantasised about getting after leaving everything to come here, a new accent was never one of them. Since South Africans were apparently incapable of understanding me, I was obliged to attend speech therapy twice a week after lunch break to rid my tongue of Kenya.

However, my parents ensured that we were still surrounded by people who call the same land, “home”. In this network of ours, we share survival skills, like how to pronounce the isiZulu word for elbow, indololwane. We heard that immigrants are being asked to say this word because its delicate pronunciation will reveal a foreign tongue so we practice even though we will probably never perfect it but just in case, you know.

Being a foreign African national has always been an extreme sport in South Africa. There are cases from as early as 1994 that account for xenophobic violence but the country is still a place of “refuge” for many Africans. There are African stories about the impressive infrastructure of Johannesburg, the nation’s consumable tap water, the power of the Rand and the inclusivity of the South African constitution. South Africa is like a tall glass of milk and a never-ending flow of honey. Even though, our African homes are indeed majestic in their own right, things like “political unrest”, “economic instability” and “environmental degradation” can cause your house to catch fire or even just the smoke itself makes it terribly difficult to breathe. So please understand that leaving your home, your family, your people, your history, your land and choosing a country that does not want you, is predominantly an act of survival.

South Africa only began recognising refugees after 1994 when the country became a signatory to the United Nations’ and Organisation of African Unity’s Conventions of Refugees. By that time there were already hundreds of thousands of foreign nationals in the country. Overtime, the numbers have increased and there is still uncertainty about the exact number of foreign African nationals that reside in South Africa. Despite all its glory, this country is infamous for its horrific crime and rape statistics. Furthermore, the young democracy is still struggling to restore equality. The nation still suffers from unemployment and poor service delivery from government. These and other socio-economic factors seem to be disregarded when South Africans resort to violence towards foreign African nationals.

Now, I am not here to say “NOT ALL FOREIGN AFRICAN NATIONALS” but foreign African nationals are blamed for heinous crimes and stealing the jobs of locals. I get it, the resources are not distributed evenly and we are all trying to get the tiny piece of pie that we now feel entitled to as black people but how are foreign African nationals to blame? How does torching the tiny Ethiopian-owned corner shop create employment? How does shooting a Nigerian decrease the crime in an entire community?

The most terrifying part is that people in positions of power are simply not willing to acknowledge this “deep dislike” or they simply share xenophobic sentiments. After the horrific 2008 xenophobic violence, Thabo Mbeki, the president of the nation at the time, said, “I heard it said insistently that my people have turned or become xenophobic...I wondered what the accusers knew about my people which I did not know”. Mbeki was apologetic but how could he be this ignorant? Had he not heard of the Zimbabwean and Senegalese who had been thrown out of a moving train or the Angolans who were deliberately trapped in a burning house? Had he not heard the derogatory vernacular term for foreign African nationals, kwerekwere, being thrown around?

More unapologetically, in 2013, police officers tied Mido Macia, a Mozambican man, to the back of their van and dragged his body. In 2015, Zulu King Goodwill Zwelithini said, “Let us pop our head lice. We must remove ticks and place them outside in the sun. We ask foreign nationals to pack their belongings and be sent back”. This February, the Johannesburg mayor, Herman Mashaba said, “[Illegal immigrants] are holding our country to ransom and I am going to be the last South African to allow it.” Subsequent to both King Zwelithini and Mashaba’s remarks xenophobic violence became rife.

The ease in which black South Africans resort to xenophobia is unnerving. In the month of February 2017 alone; there has been an anti-immigrant march, Mario Khumalo registered a political party called “South African First”, which is built on xenophobia, and the President of the nation, Jacob Zuma, stated that the violence that my fellow immigrants and I are experiencing is not “xenophobia”.

If anything, the current state of the nation represents the blindness of patriotism. Are xenophobic South Africans going to be ignorant to the fundamental failings of their state until every foreign African national is dead or deported?

Moreover, the target is on the backs of foreign African nationals which is baffling because we all know that the wealth is still in the white man’s pockets. So how are we incapable of recognising how Afro-phobia’s roots stem from racism?

I await the day that xenophobic South Africans are liberated from the strongholds of nationalism and realise that as Africans, we hold a history that is similar in one way or another. We are all trying to understand what it means to belong to a continent that was taken from us and then difficulty reclaimed. We are all trying to rid ourselves of the ideals that colonialism entrenched within us. All in all, we are surviving and looking forward to the day we can be submerged in the fullness of life. In the meantime, I will continue assimilating on the basis of survival and loudly chanting Kendrick’s mantra with the desperate hope that “we gon’ be alright.”

Hazel Kimani is a Johannesburg based writer, who is passionate about black people, Saturday afternoons & Hip-Hop. You'll probably find her debating about social issues, laughing at the absurdity of life or giving hair tutorials to all the girls standing in the line for the bathroom. Twitter & Instagram: @hazelkimani