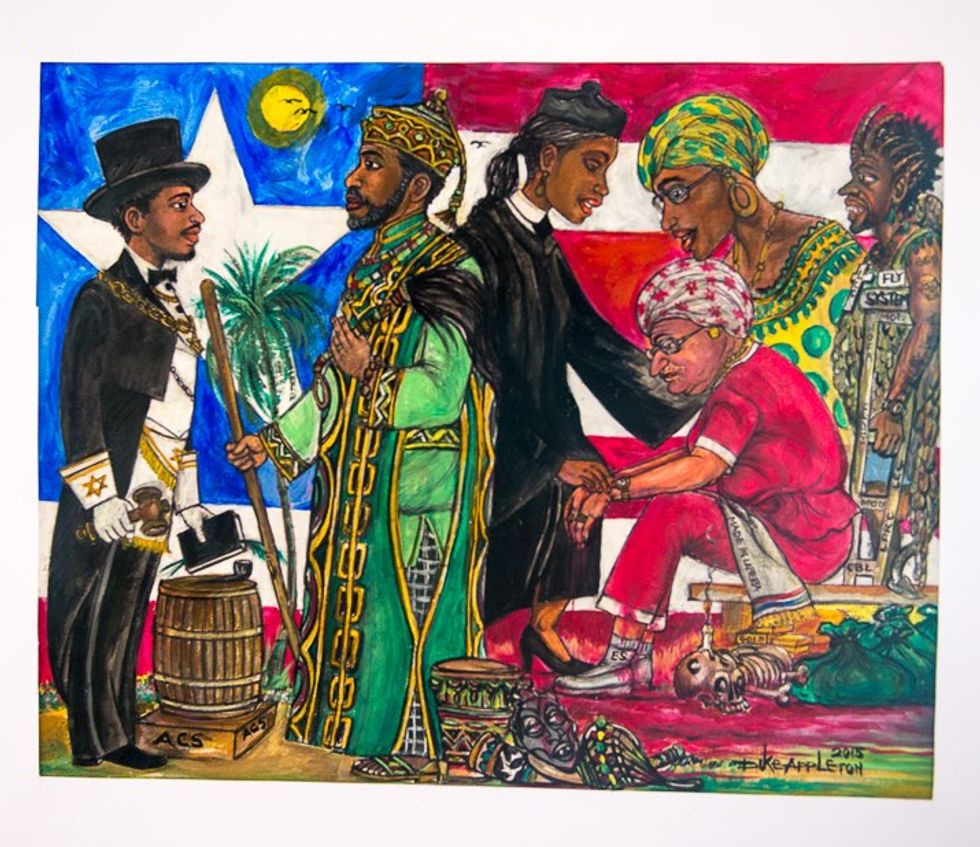 12 Liberian artists showcase their government accountability paintings in an exhibition at the National Museum of Liberia.

An artistic culture is starting to resume in Liberia, with a number of African curio shops lining the road to Robertsfield Airport and Monrovia’s busy Waterside Market. Nonetheless, an exhibition of Liberian art has proven more common in the West than in Monrovia, where the commercial business district has not housed an art gallery since 2012.

Accountability Art: Liberia’s Quest for Integrity, on display at the National Museum of Liberia through July 3, is a local exposition of Liberian artwork. It was jointly commissioned by the Accountability Lab, a local NGO that promotes transparency and integrity through creative and entertaining activities, and the Liberia Visual Arts Academy, an educational organization that empowers young Liberians through training in the visual arts.

The exhibit was launched by Kenneth Best, Editor of the Daily Observer, Liberia’s oldest mainstream newspaper in circulation, and Rev. Emmanuel Bowier, who served as the country's Minister of Information in the late 1980s. A. Leslie Lumeh, dubbed “Liberia’s most celebrated artist” by CNN, says of the exhibition, “I’m happy that we were able to make this a reality. It means that society has faith in what we’re doing. They appreciate and believe in what we are saying.” Lumeh notes that it's only the third exhibit in Monrovia he's participated in since returning to Liberia from exile ten years previously.

The exhibit features 24 works by 12 artists. In addition to Lumeh, participating artists include Duke Appleton, a former intelligence operative in the Taylor government who now works with UNICEF and is the founder of Liberia's Artists Without Borders. Frank Dwuye, a lead illustrator of the Tabellah Tee Ebola Survivor comic book, also contributed to the exhibit, while Luckay Buckay is perhaps best known for his musical endeavors.

Although the government of President Sirleaf has committed to numerous reforms and good governance principles – a host of integrity institutions have been formed in recent years, such as the Liberia Anti-Corruption Commission, the Governance Commission, the Law Reform Commission, and the Independent Information Commission among others– the accountability artists, like many Liberian civil society actors, argue that the Ebola crisis is but the latest and most well-known incident illustrating the extent to which mismanagement continues to plague Liberia. As Lumeh notes, “we have laws on paper, but people do things and go free. That’s not justice.”

The Accountability Art exhibition displays images of fiscal mismanagement at the Ministry of Finance, sexual and financial impropriety of teachers and school administrators, protest demonstrations, child labor, lazy public sector employees, the refusal of lawmakers to abide by traffic regulations and other related themes. As Rev. Bowier noted, “these paintings depict our way of life…if we see they are not good practices, we can try to change.”

Brooks Marmon is an employee of the Accountability Lab in Monrovia, Liberia.