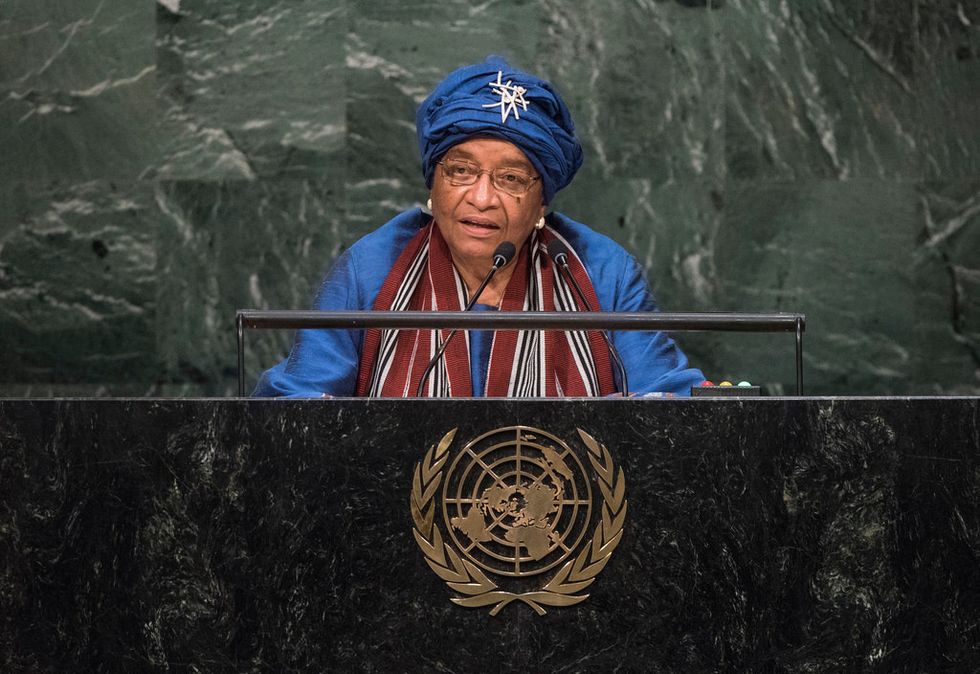 The Liberian presidential race has reached a stalemate, leaving the country with an uncertain political future.

Liberia's President Ellen Johnson-Sirleaf is not about to get the smooth democratic transition she hoped for. This is due to a stalemate created by the Supreme Court of Liberia that has plunged the rest of the country into a state of uncertainty. The court ruled in a landmark complaint brought forth by the Liberty Party (LP) of U.S trained lawyer Cllr. Charles W. Brumskine, placing a stay order on the ensuing runoff elections. A runoff between former international footballer George Weah, of the Coalition for Democratic Change (CDC), and Vice President Joseph Boakai, of the governing Unity Party—originally slated for November 7—will not go on as planned.

"The NEC is prohibited from holding the runoff elections until LP's case before it is concluded and the appropriate and due process is concluded."

These parties allege that there were massive fraud and irregularities in the voting process during the October 10 poll. But the truth of the matter is that these complaints brought on by the LP is only the tip of the iceberg of the political power struggle that is taking place in Liberia at the moment.

Interestingly, the president's party—on whose ticket she got elected twice—seems to be undermining her authority. The ruling party has launched a series of scathing personal attacks on the President because of her alleged lack of both financial and moral support for the candidacy of her Vice President Joseph N. Boakai, who is running to succeed her.

"The fight between Liberia's political elites will have an effect on the ordinary people who are yearning for change."

Even though the President's office has issued several public statements, pledging support to the Vice President, party stalwarts like disgraced former chairman, Varney Sherman, do not believe she truly supports the party.

"I cannot confirm or deny whether she supports the Party," said Sherman—the disgraced Senator of Grand Cape Mount County, who's facing trial after indictment on a Global Witness Corruption report—in an interview with FrontPageAfrica.

The last few weeks have seen a bitter public struggle between supporters of the President and members of her party who support her Vice President. The ruling party, last week joined the LP, describing the Johnson Sirleaf-led government as corrupt and marred by nepotism for the last 12 years.

It took the ruling party a difficult first round run against LP, and 18 other opposition political parties, to finally admit what every single critic of the President has been saying for over a decade. The party also maintains that massive fraud occurred during the October 10 polls and joined the LP in claiming that the President interfered in the elections.

The ruling party seems to be up for the nullification of the October 10 elections results because they want another opportunity to reevaluate the political climate, and to continue to push the divisive politics of war. Therefore making the elections more about a corrupt President and not about what they bring to the table for Liberians to give them another six years.

The party claimed that thousands of Liberians were disenfranchised but waited more than 20 days to file a complaint even though the law says 7 days after the polls. These political leaders seem to be taking a page from the Kenyan elections playbook which saw the Kenyan courts nullifying that country's elections results and ordering a rerun. But there's a huge difference; Liberia's election is still a manual process and due to under development and lack of access to good road network, elections workers have to carry ballot boxes on their heads and wade through water to get it to the nearest accessible roads.

There is also a major factor in the current stalemate we see unfolding in Liberia today that many don't seem willing to talk about. Liberian political elites seem scared of anything that resembles a country that could possibly be led by a footballer and are fighting tooth and nail to stop it. Members of the Liberian political establishment have always bonded and resolved in the claim that the Football star who is in the lead as one of the favorite to win the has no experience and lacks the sophisticated education from an Ivy League school to lead the country. Many in the elite camp liken a Weah presidency to some sort of evil that is about to be cast a spell upon the country. But Weah is popular among the disadvantaged youth and many ordinary Liberians who lack this sophisticated education but can relate to his wretched beginning.

It has even become worse now that the footballer is running against a ruling party's candidate that carries the burden of a failed regime as a record for the last 12 years. Weah came top of the list among 20 candidates running for President with 38.4 percent of the votes followed by the ruling party's candidate Boakai with 28.8 percent. Weah got the most votes in over ten of Liberia's 15 counties with the incumbent Vice President only able to win his home county of Lofa. It looks like a technical knockout for the ruling elites and challenging the results is a way of regrouping into an anti-Ellen movement; make her unpopular than she already is and paint a picture that she is supporting a Weah-candidacy against her ruling party's choice for President. The Supreme Court would then be used as an antidote to correct the process by calling for a rerun of the polls to give the elites the chance to rewrite the rules of the game.

"As the court delays the prospects for a runoff, many Liberians, including myself, are bracing for a long process of judicial rigmarole."

Many—especially from the LP and the ruling party—have hailed the court's decision of placing a stay order on the elections. But the same court would earlier in the year rule in favor of the vice Presidential candidate of the Liberty Party Harrison Karnwea formerly of the ruling party, who was in clear violation of the Code of Conduct, which called for public officials to resign two years before contesting for political office. The court ruled in the LP's favor on claims that Karnwea, at the time, did not have the "desire" to run for office because he was chosen as running-mate to someone running for the presidency.

During the handing down of this verdict in July of this year, the Justices stated that Karnwea violated Section 5.1 Code of Conduct (CoC) by holding a press conference on March 14, while serving as Managing Director of the Forestry Development Agency (FDA) to announce his resignation from the ruling party and join the LP. Despite this statement, the court gave a less stern punishment for the violations and ordered the NEC to reinstate Karnwea as LP's Vice Presidential candidate.

"He resigned after the Code of Conduct was declared constitutional. His conduct of not resigning two years earlier is in violation, we don't believe that the action is egregious in nature," stated the court.

As the court delays the prospects for a runoff, many Liberians, including myself, are bracing for a long process of judicial rigmarole, something that is looking to be a fight between Liberia's political elites and Johnson-Sirleaf.

The fight between Liberia's political elites will have an effect on the ordinary people who are yearning for change.

During the early days of the campaign, the ruling party and other political commentators accused President Johnson-Sirleaf of bankrolling Charles Brumskine's Liberty Party, which the LP has vehemently denied. They still ran a campaign that claimed that they wouldn't attack the President because she is no longer running for office. All of that changed when Brumskine lost the elections and launched a verbal attack on the President on the BBC.

Brumskine, in an interview with the BBC, accused outgoing President Ellen Johnson-Sirleaf of not following the law when she refused to take up her seat as Senator of Montserrado County under then military despot Samuel K. Doe in the 1985 elections.

"Election took place long before election day," claims Brumskine but he went ahead anyway and participated in the polls along with the other candidates who are contesting.

"...Unlike in 1985, when President Ellen Johnson-Sirleaf ran to be Senator of Montserrado County, when her party lost the election and she and others felt that they were cheated, they brought a war upon our country that cost the loss of lives. Our country was completely destroyed."

The government fired back through the ministry of information in a strongly worded statement condemning Brumskine's attacks on the President.

"[These are] simply the rants of a sore and selfish loser who is so blinded by ego and arrogance that even after 12 years of rejection by the voters, he is unable to accept that he is not the presidential choice of the Liberian people," Information Minister Eugene Nagbe said. It must be stated that people loyal to the President have been distributed across the major political parties including LP, UP, CDC and the ANC.

The fight between Liberia's political elites will have an effect on the ordinary people who are yearning for change, as expressed in the first round of the elections. But that change will only come if the democratic process is not hijacked by the courts in, what looks like, an attempt to create a constitutional crisis that would then pave the way for an interim government.