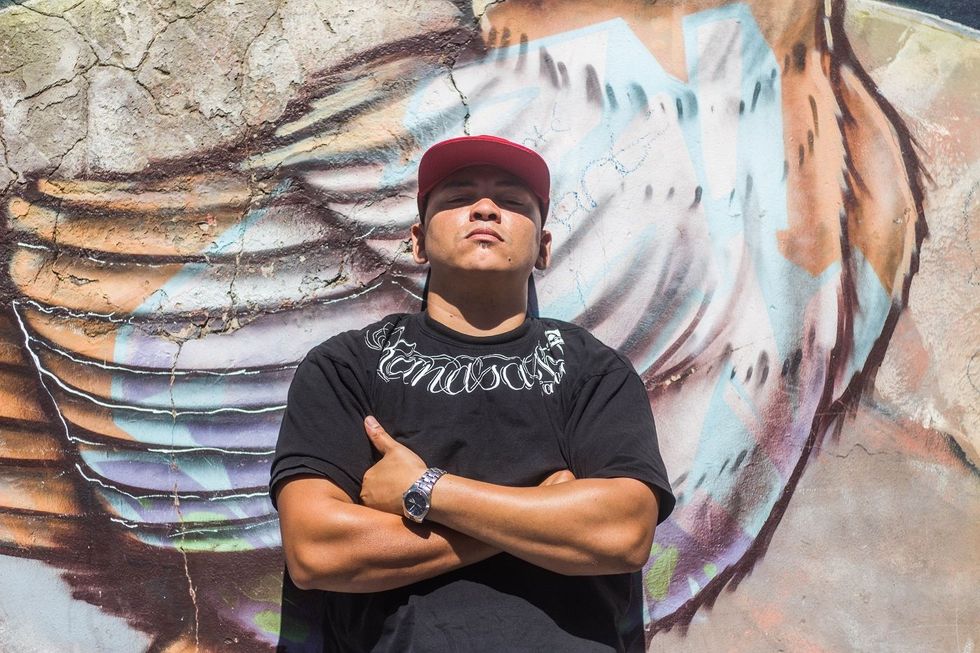 “I'm trying to encourage the sentiment that we are all family," says the rapper about the album's title. “When my neighbor has a problem, it's my problem as well. When there are evictions happening in Woodstock, that is my problem as well. We should all stand up for each other's problems."

Linkris is a self-confessed conscious rapper, and he favors traditional hard-hitting boom bap production. And that's what you'll find on Bloed Is Dikker As Water.

On the album, the 29-year-old rapper focuses on coloured people's issues—just like on his previous releases.

The project goes from talking about how coloured people are marginalized in South Africa and their stereotypical portrayal on mainstream media, to internal issues like “uppity coloureds" who aren't embracing their ethnicity (“Een Honnet Persent"), how religion is used to blind people from the truth (“Dis Tyd" featuring Dope Saint Jude), to crime in coloured neighborhoods (“Bloed Optel").

He isn't shy about calling out politicians like President Jacob Zuma, Patricia de Lille, Helen Zille, FW de Klerk—who he says all have blood in their hands on a song called “Be-Bloede Hande." On “Omdat Ek Kullid Is," the first video single from the album, he raps about staying true to his coloured heritage through all the challenges his people face.

Some context. The apartheid government in South Africa, among other evils, introduced the Population Registration Act—which hierarchically separated South African races. At the top of the food chain were Whites, followed by Indians, then Coloureds and lastly Africans (for the sake of this piece, I will use the word “black").

Indians and coloureds had a few more privileges than blacks, but were still oppressed nonetheless.

More than 20 years after apartheid ended and the ANC took power, not much has been reversed in South Africa. Land is still in the hands of people who stole it. Most people of colour are still living in the ghetto. Affirmative action is there, but it has barely scratched the surface.

While all people of colour fought together against apartheid, coloured people feel marginalized under the black government. Take for instance, in Linkris's field of hip-hop, AKA is one of the few coloured rappers making it big. YoungstaCPT, even with an unmatchable work ethic, has been struggling to get through.

When the athlete Wayde Van Niekerk won a record-breaking gold medal at the Olympics last year, a conversation was started. Some coloured people questioned why that was considered “black excellence," but when coloured people are being stereotyped as gangsters, they aren't referred to as black.

“How many coloured freedom fighters do you know?" Linkris asks rhetorically, trying to demonstrate the erasure of coloured people in South African history. “People are only learning about Ashley Kriel now because [filmmaker] Nadine Cloeteis pushing this documentary [about him] that she's been working on for a while. But besides Ashley, there are a lot of [activists] we don't know about. It's evident that our history books don't include our people. Colored people have to walk on water to get the same merit as their black and white counterparts."

The conversation is ongoing, with movements like Colored Mentality, which was started by two women on a quest to explore their colored identity and open a conversation about it. Many think-pieces have been written, with some claiming that colored people are always avoiding their black identity or there's no such thing as coloured identity.

Don't say that around Linkris. He acknowledges that the term itself has a dirty history. “Let's take this ugly term 'coloured,' which we are called whether we like it or not, and make something good out of it," he says. “I think that's going to be less laborious than having to uncover and learn for a thousand years till I get to a point where I'm like, 'Now I know what I'm gonna call myself.' I think we are too stuck in terminology. We need to start doing things. I'm tired of all this talking, these workshops, we need industries, we need business, housing… a lot of things."

Bloed Is Dikker As Water offers Linkris's outlook on life and coloured identity. It plays out as a history lesson at times. The academic Shanette Martin, who does the intro, gives a not-so popular origin of Afrikaans (the language most coloured people speak), which is normally looked at as the oppressor's language.

She states that Afrikaans is the heritage of the brown Afrikaner, who is essentially a mixture of various slaves from Africa, Indonesia and Malaysia. We learn that the settlers instructed the slaves in Dutch. Having to communicate among each other, the slaves developed a language that was based on Dutch, but contained Malagasy, Malay and Khoi words, birthing Afrikaans. Later the Dutch masters adopted the language of the slaves to accommodate everyone.

“I've had people who say the intro encouraged them to just go do a Google search," says Linkris, “and what they found when they started digging in academic journals—by the likes of Richard van der Ross and Adam Small—was that there's a lot they don't know. They were just regurgitating the notion that it's the oppressor's language."

So what are the challenges of rapping in Afrikaans? One, according to Linkris is it's hard to get his and his Katalis Productions labelmates' music playlisted on mainstream radio and TV. “Besides Goodhope FM (especially The Ready D Show) and Bush Radio, no one is showing love to Afrikaans hip-hop," says the rapper.

“We've submitted to Metro FM and YFM. We have the paperwork on lock, and we mix and master our shit. Maybe they don't like the sound, but at least give us a response. The DJs must also be held accountable. They play their buddies' music, and only give you a slot there, but when it comes to daytime playlisting, it's their friends. They are in a strategic position where they can actually say to their station managers, 'Let's be open-minded, let's take some risks.'"

But he's optimistic: “I think there's a shift happening, I never thought I would get played on MTV Base, with my aggression and that kind of production. I can't think of any Afrikaans hip-hop artist except maybe Die Antwoord and Jack Parow who have been played there.

Linkris assures me there is a market for Afrikaans hip-hop. “When I go to Outshroon (a rural town in the Western Cape), I easily get a crowd of 7,000, and that's without a major sponsor."

Linkris believes in coloured people building their own structures, instead of complaining about marginalization. “Yes, we are marginalized, but why aren't we starting our own multimedia companies?" This year, Linkris looks to expanding his fanbase in South Africa, and completing some collaborations with some artists in Holland, who him and his team met while there for a show.