South Africa's Other Afro-Jazz: Louis Moholo And The Apartheid Avant-Garde 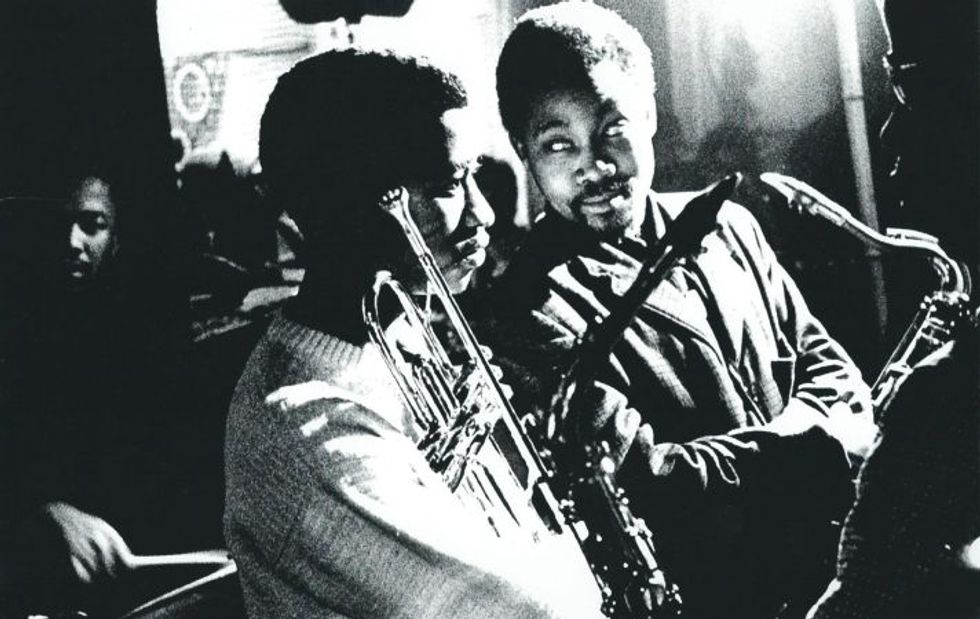 South Africa's 'Other' Afro-Jazz: Louis Moholo And The Apartheid Avant-Garde.

Sophiatown and District Six: balmy iconic images of vibrant black folk jovially grooving away their oppression; a testament to the fact that, with enough booze, music and fedora hats, one could overcome any ordeal life presents you with. This is the imagery which comes to mind when one listens to the melodies of South African jazz legends Abdullah Ibrahim's "Mannenberg," Zim Ngqawana's "Ebhofolo," and the catalog of perhaps the most acclaimed local jazz musician of them all, Hugh Masekela. With the catchy piano loops and Nguni-inspired riffs and rhythms, afro-jazz, as it has come to be known, emerged as the indomitable soundtrack of the Apartheid era– protest music to dance to.

Like the paintings of George Pemba and art's Rorke’s Drift movement, South Africa's afro-jazz movement chose to reflect the positive times amidst a dark age. After all, shouldn’t art be there to console the inconsolable with the harmonious beauty often absent in reality yet ever-present in itself? Why on earth should our entertainment be as mentally draining as our perils? It should be a soothing ointment to the bruises of the day, rather than an extension of them. It was in this context that the South African jazz scene of the 60s to 80s was ironically upbeat and cheerful, to remind black people of how to be happy.

However, there was another hardly publicised movement in South African jazz, one more reminiscent of the art of Dumile Feni and Thami Mnyele, portraying the grotesquely savage mutilation and permanent disruption of a people. This movement of South African avant-garde jazz led by Louis Moholo and others like Mongezi Feza, and Ndikho Xaba, revealed the bewildering violence and havoc of the time. Instead of concealing the pains of oppression in joyful chords and sunlit vocals, it magnified them in chaotic overlapping arpeggios and howling horns from hell and unmelodious clamours of percussion all intertwined to form a sonic re-enactment of the mechanical sporadic genocide that was Apartheid. When Louis Moholo’s compositions breached the tunnels of your ears into your mind, they ignited the anxiety of the township. The listener can almost feel the frantic restlessness of perpetually imminent death. Naturally, it’s a feeling of discomfort, a cacophonous jumble of confused incomplete lives drag-racing towards their merciless oblivion. He leaves behind a yearning for peace and quiet like an old disillusioned activist at war. He manages to summon something transcendent in the process, but just like in black lives of the time, it is hidden within the fragments of tranquillity between the chaos.

The comparison of his oeuvre to that of Feni seems ever more applicable the deeper one listens to its overtones. They both seem to be fascinated with the idea of disfiguration: How the injured become monsters to the untouched and vice versa. The injury can be anything from one’s blackness or poverty to one’s intellect. Such is the underlying premise behind experimental music in general. Because we are injured with intellect and you are untouched, we are bound to look like monsters to you and our music is bound to sound like a monstrosity to your ears, but remember: We are equally as repulsed by your music as you are by ours! Believe it or not, mainstream music sounds just as nonsensical and incomprehensible to us as experimental music does to you. Debate is our dance; we find solace in the puzzle of making sense of the erratic and strange whilst you find it in the act of singing along to the formulaic and mundane.

The way we see it, what’s pleasing to the senses is usually not what’s nourishing to the mind; and we choose to take pleasure in the unapologetic progress of the art form. Louis Moholo exemplified this sentiment with his music and it is tragic that whenever the recurring list of jazz "legends" in this country is given endless nauseating tribute for giving The Struggle irreverent pop appeal, his name remains unmentioned; his work unnoticed; disregarded for its darkness... much like the people it spoke for.