The Ma'Ati, A New Graphic Novel & Travel Magazine For Travelers From The Diaspora 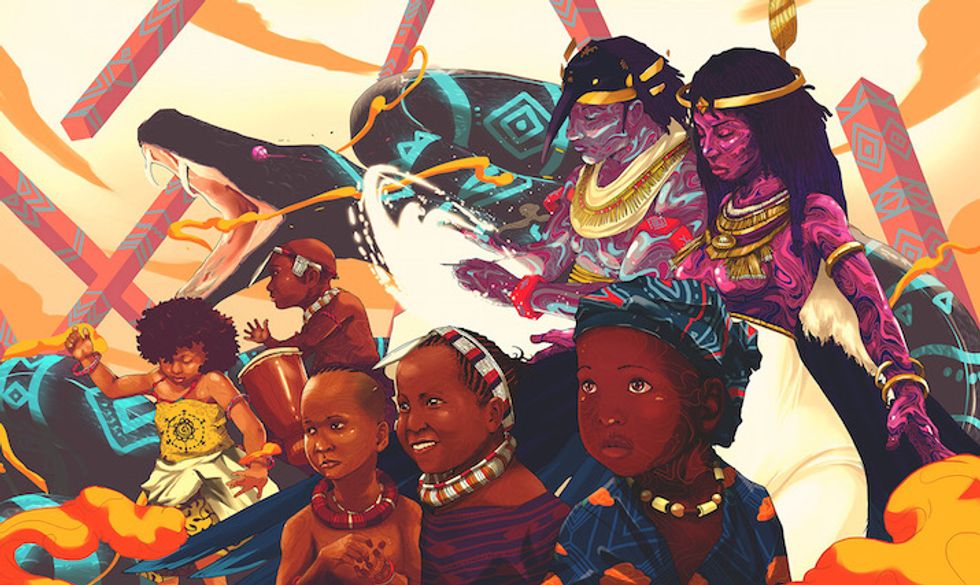 At the center of this hybrid platform lies the Ma'Ati, a mythical nation of nomadic storytellers who were lost to history for several centuries. Founding editor Shamira Muhammad created this magical world as a vehicle to travel around the world one chapter at a time through a protagonist based loosely off of herself and her own excursions. The novel will follow Shamira, a young American woman in the throes of a quarter-life crisis who stumbles onto clues of her family’s mysterious heritage, as she sets out around the world to retrace the footsteps of her ancestors.

Each chapter of The Ma'Ati, which will debut monthly on themaati.com, is written and set in a different city. So far, Shamira's real-life trips to Jamaica, Cuba, D.C., Alabama, New Orleans and Harlem have inspired the novel's first six chapters and its vibrant illustrations.

In an op-ed for Afropunk, Muhammad explained her motivation for the project:

"I created the Ma’Ati after several frustrating years of looking for a travel magazine that spoke to the type of explorer that I am. It is hard to find good, travel content that appeals to a young, Black, artsy, urban, ancient, trippy, fantasy loving biker-girl. Having traveled to over ten countries around the world, and living in places like Ghana, France and Egypt, travel and adventure became the ultimate mode of creative expression for me. It made me a better writer and cleverer when it came to critical-thinking, networking, budgeting and living for the moment.

While I was living in Paris as a freelance journalist, I had a growing list of friends asking me for help planning trips overseas. For those coming to Paris, I was happy to help them carve out an itinerary. But for those going elsewhere, I soon found that great website recommendations were hard to come by. My friends wanted to know the best global clubs to hit up. They wanted to know where the cool, weird kids hung out. They wanted to see local street art. They wanted food that looked straight out of Pinterest. And most importantly, they wanted to know which places were 'people of color' friendly.

What I found was that there was no one website for all that. Travel sites were either too boring, too homogenous or too focused on tourism and devoid of authentic, local exchanges. It was frustrating. So I decided to create something that I would want to read and see: one publication composed of two parts. An ongoing, illustrated book series and a cool, little travel webzine: the Ma’Ati, which means 'duality.' In creating this, I knew I would be able to showcase the world in a way deeper than tourism alone allows."

Shamira has hinted that the next chapter of the story might take place at the Kwame Nkrumah Mausoleum in Accra. Read more about the project and Shamira's plans to expand on Kickstarter, and keep up with the Ma'Ati on Facebook, Twitter and Instagram.