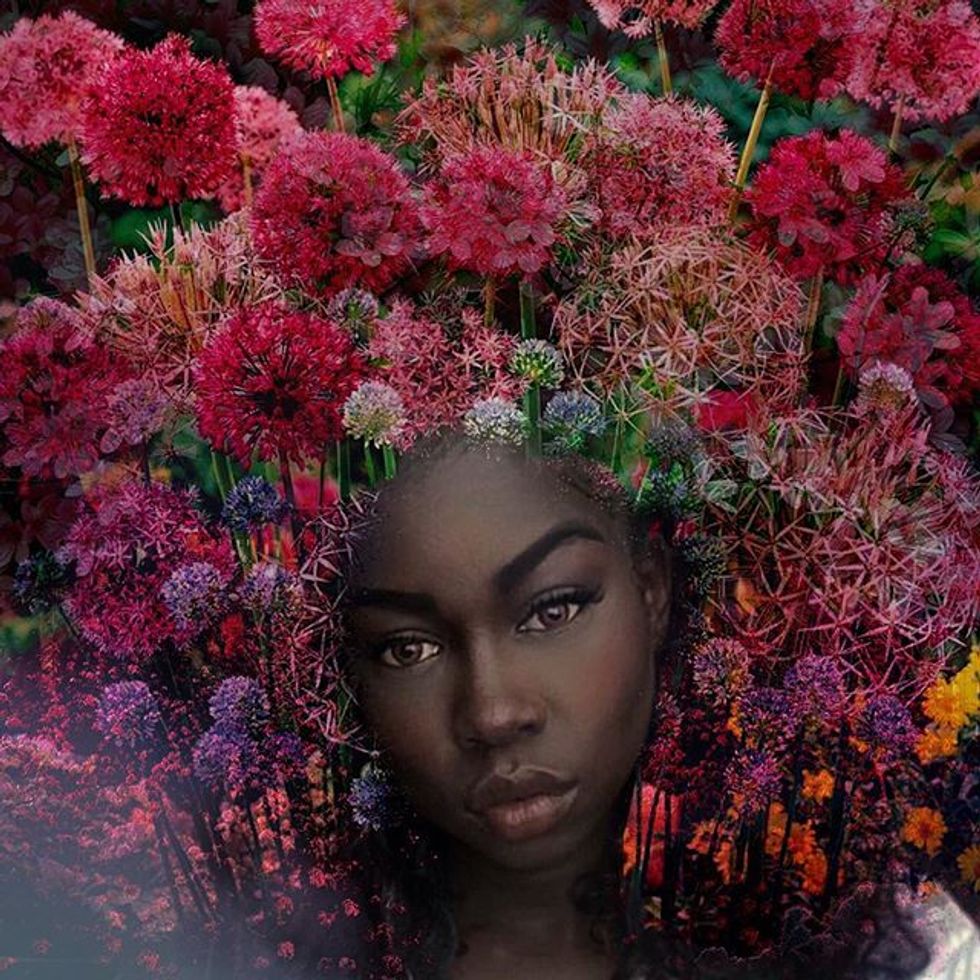 Inspired by trending hashtag #BlackGirlMagic and his older sister’s natural hair journey, Haitian visual artist Pierre Jean Louis made a departure from his usual acrylic work, last fall, to show his appreciation for the beauty and versatility of black women’s gravity-defying kinks and coils.

And the result is absolutely mesmerizing, and has attracted quite a following for Jean Louis, 23.

Okayafrica caught up with multimedia artist Pierre Jean Louis by phone to learn more about his background and what inspired his stunning vignettes.

When she is told Her skin is too dark; I do not hesitate to offer, That the sun loved her so much It kissed her more Than the rest of us. TGIF ! My new Favorite muse: @purp.alpaca

I was born in Port-au-Prince, [Haiti] and my dad's an artist too. I grew up watching my Dad paint a lot. That's kind of where I got it from. I moved to the U.S. when I was thirteen, and at first, I didn't know [any] English. I kind of hated it, but over the years, I learned English. I went to school so I made new friends, long time friends.

You mentioned your sisters, were they an influence on your project on Instagram?

Yeah, my oldest one, a couple years ago, she started going natural and I started seeing how much her hair was growing and how beautiful it was and since then... I started drawing. Then, over the years, I switched it up a little bit. I started painting after my dad told me if I really want to take my art serious, I need to start painting. [Then I] just changed it a little bit and started doing the graphic computer work and all that.

Every flower must push through the dirt to get to bath in sunlight. Muse: @blissfullqueen

How long have you been creating in this style?

I started with colored pencils and that was like two or three years ago. Then over the years, I started painting. It's the same style, this is my actual style. If anything, that's what people know me for— is for the flowers and women in general. I feel comfortable to do black women more because [their] hair is more flexible. But women inspire me, in general, when it comes to art. It's women and nature—the world around me, actually.

When did you start doing the work that has gone viral on Instagram?

I did my first picture at the end of last year. I kept it on my phone. I never shared it until like December. Then, my friend saw it and he's like, ‘just make more.’ I started making more and then people started seeing them—and it just took off from there.

Yeah, I guess you didn't set out for this to become so popular, but then it did?

I was just having fun with my computer and my phone, you know? I took my sister's picture first. Then, boom. I'm like, ‘Wow.’ It's just amazing how people really appreciate it.

Beauty is in the eye of the beholder ?had to watermark my pictures ?

What artists have influenced your style?

It's my father most definitely. At first, I didn't know any other artists besides my father until I moved over here. It's just my dad that's always been a big part of my inspiration and motivation actually. In fact, that's where I get the nature part because he does a lot of green, a lot of nature, a lot of water and just nature in general. That's his main medium, that's where I got mine from.

Why black women and natural hair as muses?

A lot of black females don't feel comfortable wearing their natural hair, but the ones that do—as an artist, I have to tell them how much I appreciate them for being comfortable and proud for rocking their natural hair. Those pictures that I make—it's for the ones who are proud of themselves and proud to show their African heritage. Maybe I can inspire some other black girls to just join them, and just say ‘F the world. I'm going to do whatever. I'm just going to do myself.’

The blacker the berry the sweeter the juice. Muse: @danielledesireexoxo Photographer: @2020photography3 ✊?

There was talk that Haiti would join the African Union and there's always been that connection between Haiti and the continent, what’s your perspective?

Would you say that your project is about self love?

Yeah, it's self love and self confidence and beauty, in general. As long as you’re keeping it classy. You’re keeping yourself natural, that's self love right there. That's beautiful. This is what my project is about, to be honest.

Jean Louis has art shows scheduled in NYC and Seattle this summer.