In Conversation with Mandla Mlangeni: 'Jazz music was also considered pop music at some time. It was music for the youth.'

Mandla Mlangeni is a jazz musician and trumpeter whose Cape Town-based collective, the Tune and Recreation Committee, has released two albums to date including Voices of Our Vision back in 2017 and more recently, Afrika Grooves.

Mlangeni's sound is markedly intentional and seeks to explore the cultural diversity of the African continent in all its glory. He also challenges his listeners and brings varied socio-political challenges and histories to the fore whilst simultaneously creating a refuge in music as a whole.

Born-and-raised in Soweto and a music composition graduate of the University of Cape Town, Mlangeni is the recipient of the prestigious Standard Bank's 2019 Young Artist Award and performed at its annual jazz festival.

An exceptional trumpeter, Mlangeni began studying music at an under-resourced school as a young boy. The waiting list for instruments, the saxophone in particular, was incredibly long and he would have had to wait a couple more months for his turn were it not for one of his teachers who kept a trumpet in the boot of his car. Mlangeni began playing the trumpet at 14 and he's been playing it ever since.

Growing up with the sounds of jazz emanating from his neighbor's house introduced him to the genre and its numerous artists. Not one to be bound by strict categorizations, Mlangeni says, "I don't think I'm only a trumpeter. I think of myself as a musician and as an artist, and I use music as a canvas to paint."

We caught up with him to talk about being a young musician in a genre often steeped in misconceptions and stereotypes, his current projects and what it feels like to be at the prime of his music career.

You'll be performing at the National Arts Festival. Talk me through some of the things that you've been doing to prepare for that.

Been quite a couple of things that I've been doing, and it's actually been a whole preparation—six months running. Ahead of this, I've had a series of tours, performances, recordings, and I've released an album, some of which I'll be premiering at the DSG Hall in Makhanda—the Standard Bank Jazz Festival. I'll also be presenting my two hours experiments at Freedom Ensemble and the Tune Recreation Committee.

In an era where hip-hop and pop are really dominating the youth scene, how are you navigating the world of jazz as a young musician?

Well, you make music. You continue to make music and we continue to be true to ourselves and stepping beyond categorization. What the role of the artist is in society is beyond the confines of any genre or style. So with me, I mean, I see myself as a musician and an artist. Jazz for me is the root for it all. It's what has given birth to a whole lot of genres, and at some stage, some point in existence, jazz music was also considered pop music. It was music for the youth. I think there's a misconception around jazz because of how people like to typecast it as being for whiskey-drinkers or much older people.

Well, it made sense to me because I played a musical instrument. I picked up the trumpet. I started off playing classical music and from classical music, my neighbors were listening to jazz music. I'd listen to the sounds of Louis Armstrong so in that sense, it was music within my environment and music that I went to school for as well.

At school, my peers were playing this music. I spent my weekends and my after-school time around people who were listening to that music. So it made sense for me to actually check it out.

What are some of the sounds that inspire the unique sound that you have?

I think generally the sounds that inspire me, are the sounds that I hear in my head, the sounds that are in my environment, or essentially concepts that I'm thinking about. I think I want to explore more of the cultural diversity that exists in our country and on our continent. That's something that I don't think I've given too much focus. And it's not particularly just in the realm of music as well.

There are things that happen around me like, with the threat of war now with Iran, there's so much hurt, and there's so much depravity in this world that you actually you don't know how you find yourself in that position. And then you always find refuge in music and all the arts. So, I'd like to use my art, or my medium of music as a platform for artists to share their stories.

Would you describe your art and the way you go about creating and sharing it as being political?

I like to think of all art as being political. It shares its own stories. But in terms of its message, it's one of hope; it's one of despair. It's so many elements. In my entertainment, I also want to make you aware of things that you might not have necessarily thought about. Or challenge you as an audience. My job is also about asking those questions that face a society.

How would you describe the visibility of jazz in South Africa, particularly among young musicians like yourself?

The music that we do is a very niche market and a lot of corporations tend to stay away from it, whereas it's easy to identify with the A.K.A.s of this world. It's not that our music is less refined or not as good. It's just that there's just no representation. You find yourself where jazz or predominantly that kind of music was the norm because maybe the influence other global, the doors to other global influences were not yet opened. And you find that once that happens and the doors to democracy and freedom open, you get an influx of so much music and influence.

We tend to not let go of the ways that we knew, and we tend to forget where we come from and who we are. And I think in many ways that has happened to the music in South Africa. And, I think, speaking to that, having structured programs that can educate audiences, or having more exposure to the music, you know, for people at a young age would be extremely beneficial for this artform. 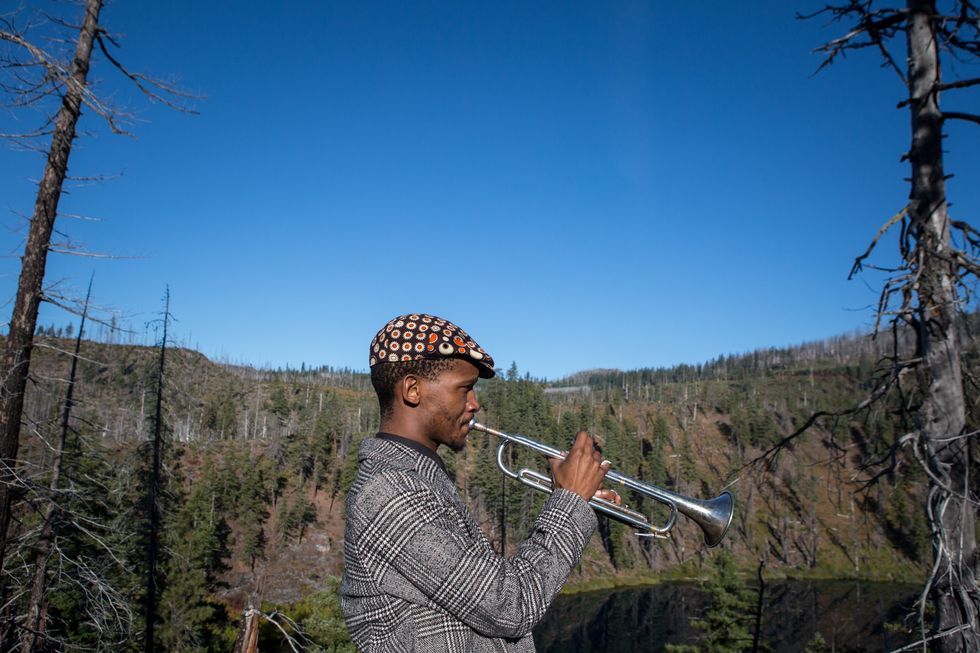 What are some of the other performers that you are looking forward to seeing at this year's Standard Bank Jazz Festival?

I'm looking forward to seeing Amy Jephta, Gabrielle Goliath, and there's also Megan-Geoffrey Prins, my counterparts in the Standard Bank Young Artists Award. It'll be a week full of jam-packed activities. And it's also the one time of the year where artists of all genres and all disciplines actually congregate for a week, for weeks on end, being audiences among the audience. That's what makes it the most exciting festival.

After the festival, what are some of the things that you're looking forward to for the rest of this year?

I'll be writing some new music to different formats and looking to actually explore territories, not just in South Africa. I'm looking forward to a tour in the Netherlands. And fingers crossed, there's another tour that's also been planned. I can't talk too much about that at the moment though.

The album is a follow-up to the artist's last project Ascension which was released in 2014. Warriors features music heavyweights including Burna Boy, Olamide, Tiwa Savage, Wizkid, AJ, Peruzzi, Syemca and HI Idibia.

The new track is a follow-up to his 2019 debut single "Pokish" featuring Galaybanton and was produced by Kiddominant.