Meet The Woman Running For President Of Uganda in Today's Election 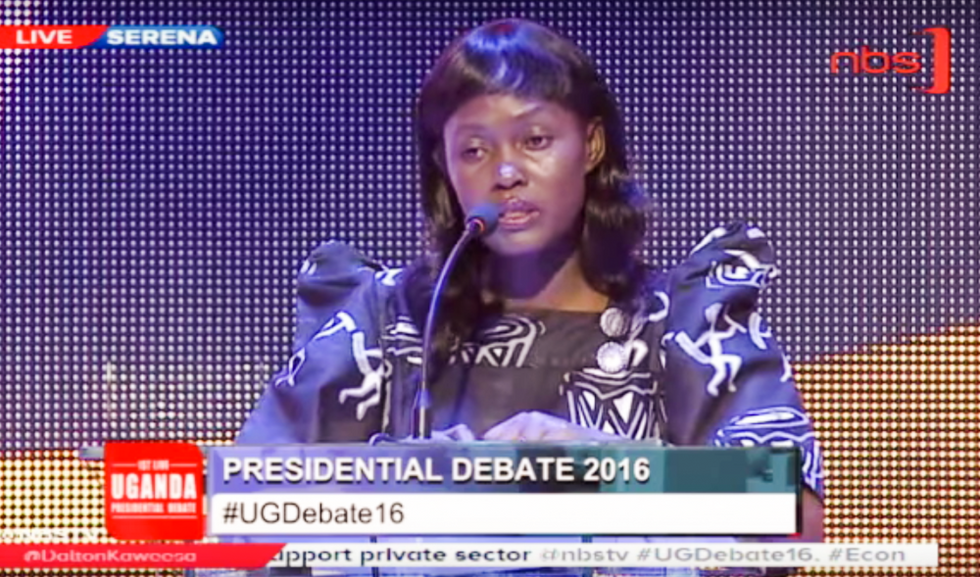 Ugandans go to the polls today to elect a president in an election most observers predict will be far from fair.

Maureen Kyalya Waluube was only 10-years-old when Uganda’s president Yoweri Museveni took power in 1986. Today she is the only woman candidate among the six men who are attempting to defeat Museveni to become the next president of Uganda. Museveni is seeking another five-year term to add to his 30 year rule.

It is widely expected by both Ugandan and international observers that Museveni will not give up his position willingly if defeated at the polls. “[People tell me] that he is going to fight and kill those who won’t vote for him,” Kyalya told the media after last Saturday’s televised debate. Nonetheless, she said after approaching him personally he told her that “he would be happy to work with me and he asked me if I would work with him in case he wins the election and I said that it’s fine as long as we would both work for the interests of Ugandans.”

Kyalya believes that even if there are challenges for democracy in Uganda, she has the best solutions as a skilled woman to bring change to the Ugandan people. “There is lots of tear gas in every police station but there is no medicine in the hospitals. Trust me, I am a mother. I will heal to this country with love” Kyalya told Okayafrica in a phone interview.

President Museveni has long been accused of manipulating the Electoral Commission in his favor. Most candidates are open about what they see as the possibility for another unfair election and all claim that Ugandans are tired of one of the longest-serving leadership in Africa.

One person was killed and several of others were wounded in Uganda's capital Kampala, Monday, as police clashed with opposition supporters of Kizza Besigye, one of Museveni’s main opponents in the 18 February vote. The police fired bullets and tear gas after briefly detaining him twice as he tried to hold campaign rallies days before a general election. Kampala police spokesman Patrick Onyango told the AFP news agency, that one person died during the confusion and Besigye was held because he did not stick to an authorized route, and his diversion would disrupt businesses.

Simon Musasizi, a reporter for Uganda’s The Daily Monitor, told Okayafrica that this campaign rally had been different from the previous ones, not only because of the two televised debates but also because young people in urban centers had expressed that they are tired of the bad leadership, high taxes, corruption and long-serving leadership without solutions.

“I was 6 years old when president Museveni took power” Musasizi said. “Now my first born child is six years old and he is still in power.” On the eve of the election, Musasizi was heading to his ancestral village east of the capital, Kampala, near the Nile river. Many Ugandans have decided to try and vote in villages outside Kampala to avoid any violence that might break out in the city. In anticipation of this expected violence, the government has deployed around fifteen thousand armed soldiers and police across the country. Cell phones and other social media tools are restricted at the polls.

At age 71, Mr. Museveni is among a cohort of long-serving leaders on the continent, including Equatorial Guinean President Teodoro Obiang Nguema Mbasogo, who has ruled for 36 years; and Robert Mugabe, 91, who has dominated Zimbabwean politics since independence in 1980.

Others appear to be following in their footsteps. In July, Burundian President Pierre Nkurunziza won a third term despite critics who said he was ineligible to run for re-election under the constitution. His victory led to a brutal crackdown against protestors who dispute his rule.

U.N. Secretary-General Ban Ki-moon brought up the issue last month at the African Union’s annual summit in Ethiopia, and the Obama administration last week issued its own call for a “peaceful, transparent and credible” election.

“Leaders should never use undemocratic constitutional changes and legal loopholes to cling to power,” Mr. Ban told African leaders. “We have all seen the tragic consequences when they do.”

According to the World Bank, during the period of 1987 to the 2000s the Ugandan economy was stable, the result of macroeconomic stability, post-conflict rebound, and outside investment, generating a sustained period of high growth. From the 1990s until the 2000s GDP growth averaged 7 percent per year, making it one of the fastest growing African countries. During the past decade, however, the country witnessed more economic instability and income growth has decelerated from a rate of 3.6 percent recorded in the decades of 1990s and 2002, to about 2 percent.

In the late 1990s Museveni was admired by the West as part of a new generation of African leaders. Museveni was re-elected on 20 February 2011 for a fourth term with a 68 percent majority with 59 percent of registered voters having voted. The election results were disputed by both the observers and the opposition.

For his part, Musasizi is hoping there will be no more violence around the election. “Let’s hope that Ugandans learned from the recent post-election in the neighboring countries” said Musasizi, referring to the 2007 Kenyan crisis when President Mwai Kibaki was declared the winner and around 1500 lost their lives during the protests that followed.