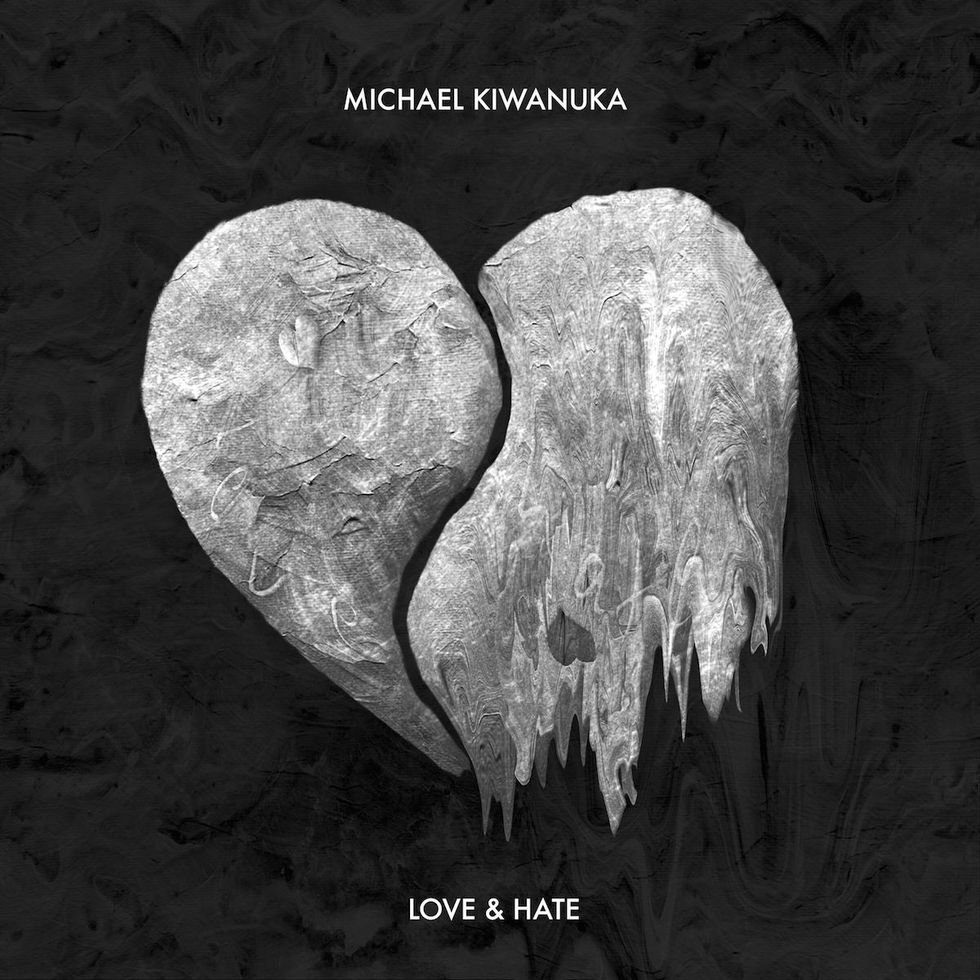 Michael Kiwanuka speaks about the tension within 'Love & Hate,' his second album and the follow-up to his breakout debut.

There’s an air of assurance around Michael Kiwanuka. As he readies to release his second album four years after a breakout debut, he speaks with a self-confidence that’s surprising.

The new album, Love & Hate, is a meditation on troubled identity that could hint at an anxious state of mind—songs like “Place I Belong” and “Father’s Child” explore a feeling of displacement that you might expect to have unsettled their writer. In fact, though, he’s decidedly breezy when we meet for a coffee outside the BBC’s central London studios.

The reason, it transpires, is that feeling isolated is something Michael Kiwanuka’s come to embrace. In both his heritage and his music, being stuck in-between is something he’s processed through writing songs.

As the son of immigrants—his parents having moved to London from Uganda—and as a black artist interested in music that’s generally sold as being by and for those who are white, he’s often found it difficult to fit in. He recalls how growing up separated from his wider family shaped a preference for tinkering with a guitar over engaging with other people.

“Other people connect with their family, hanging out with their grandparents and things like that. I never knew my grandparents, as they were halfway across the world and didn't speak English,” he says. “Stuff like that builds up who you are and how you relate with people, and I always was inclined to not relate to anyone. I love being on my own at times, making music and listening to records. That's where I feel at home.”

Speaking about the album’s lead single “Black Man in a White World,” Kiwanuka explains, “At first glance, people might think that it's [about] racism but it's not really that. It's more [a question of] who my people are, working out where I fit in—sometimes you just want that, sometimes it's easier. But I've never really had the luxury of doing that. So that song's about that, being a bit angry about it but accepting it and thinking that I'll just make my own thing. Which is a good place to be.”

It was while working on his first album, Home Again, that the problem of how his music was received first became apparent. Seeing himself in the mould of the folk singer-songwriters he was taking cues from, it was jarring to have people bracket him in terms of soul music. “When you're making music to sell, it's the first time you hear people talk about you,” he says. “The irony now is that I've made a soul record, but people just couldn't get that out of their heads before: ‘You're soul, that's how you sell records.’ In a way they're kinda right, but what if I wanna make a Neil Young-sounding record? People won't understand that.”

The move to making a soul record is ironic in another way. Kiwanuka explains how it was the experience of being musically misunderstood—or mis-sold—that, in tandem with the shift to a soul-influenced sound, informed a change in his songwriting.

Writing with a bigger perspective resembling the social commentary of Marvin Gaye’s later output, he says, “I started to dig a bit deeper and the lyrics turned into things about identity, human things. I know that things like love [explored on Home Again] are human, but this was a bit more about what makes us human.”

Working with twelve-piece string sections and big female backing vocals—à la Isaac Hayes and Minnie Riperton—the sound of Love & Hate opens out with the bigger ideas explored on it. As Kiwanuka explains, perfecting the finer details is how he wants to stand out as a musician; while chart and radio success is undoubtedly the aim, he wants to reach people through tools other than big, catchy hooks.

“Doing something a bit more subversive was a big thing for me – something which could be, for my music, a little subversive and a bit more of a visceral experience for the listener, first time round.”

“It could be the guitar sound,” he continues, “it could be putting a really harsh, thin guitar over really lush, smooth soul chords. It could be the lyrics themselves going round and round, that could raise an eyebrow.”

Working inside the often-pushy world of major labels, a headstrong understanding of what he wanted to achieve helped him make Love & Hate the album he wanted:

“Everything I did, I was thinking about how I could create a tension to make people listen.”