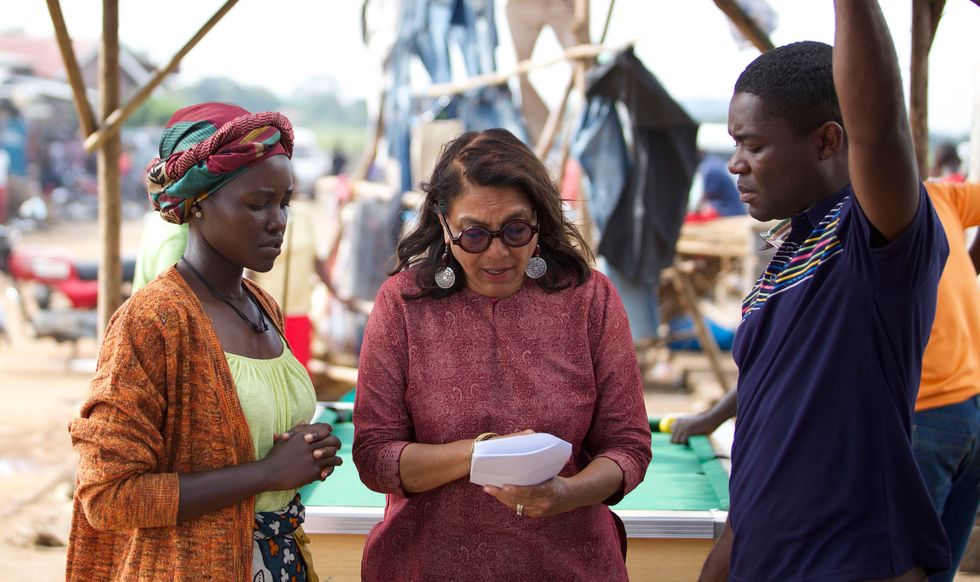 We speak with 'Queen of Katwe' director Mira Nair about the politics of African narratives, afrobeat in her new movie and more.

When Disney executive Tendo Nagenda needed a director to bring Ugandan chess champion Phiona Mutesi’s inspiring story to life, no one was more fit for the task than Mira Nair, the acclaimed Indian-born filmmaker behind such award-winning features as Mississippi Masala, Monsoon Wedding, Salaam Bombay! and The Namesake (for which she turned down the opportunity to direct Harry Potter and the Order of the Phoenix).

It was in the late 80s that the director first made her way to Uganda for research on the Sarita Choudhury, Denzel Washington-starring romance, Mississippi Masala. And it was also there and then that she met her husband, the respected Ugandan academic and post-colonial scholar Mahmood Mamdani.

Kampala’s been home for Nair ever since, and also where she founded the Maisha Film Lab, a non-profit initiative for aspiring East African filmmakers (and of which 30 percent of her most recent crew came from).

As with Nair’s lifelong pursuit and the ideology behind Queen of Katwe, the school is grounded by the mantra “If we don’t tell our own stories, no one else will.”

Their most famous alumnus is a certain Kenyan Oscar winner who stars in Katwe as the no-nonsense mother of Phiona Mutesi, Harriet Mutesi.

Mira Nair on set with Lupita Nyong'o. Courtesy of Disney.

That Nair wrote the part specifically for Lupita Nyong’o is no coincidence. The director’s husband and Nyong’o’s father have been friends for decades. Peter Nyong’o was even there the first time she met Mamdani.

When a young Nyong’o decided she wanted to pursue film, she looked to Nair for guidance. Soon, she was interning at the director’s production company in New York. And in 2006, she served as a Maisha Film Lab production coordinator in Kampala. After that, the rest, as you know, is history.

When Nair and I spoke late last Friday night, I was still very much in an emotional fog of one of the most powerful films of the year–––or what I like to call "Disney's first afrobeats movie."

It had been less than an hour since I left the Rosebank, Johannesburg cinema straight-up weeping post-Katwe. (A certain British-Ugandan folk singer is largely responsible for those tears.)

But before I proceed to explain why Queen of Katwe is the best movie of 2016, I need to make a confession: there’s an op-ed I'd been mapping out for weeks. "Why is Hollywood failing Lupita?" I was going to ask.

And given Disney's acacia tree-colored track record, I had every right to respond skeptically to news that the studio that brought us Lion King was developing an inspirational true story set in the slums of Kampala.

Here’s what I now know: if there's one takeaway from the movie (there's a lot), it's that Hollywood can do right by African stories. But most importantly, the stories need to be left in the right hands.

For Katwe, those hands came directly from the continent and the diaspora.

In Disney’s Vice President of Production Tendo Nagenda, the film had a Ugandan-Belizean executive determined to bring Mutesi’s inspiring story to the silver screen. And most importantly, to do it authentically.

In Nyong'o and David Oyelowo, the film had two of the brightest stars in Hollywood, both of whom have made it a lifelong commitment to ensure that Africans are telling their own stories.

In teenager Madina Nalwanga, the film had a gifted newcomer whose own story mirrors that of the chess prodigy whose complexities she brings to life.

And in Nair, they had a powerful storyteller fiercely committed to keeping it real and doing right by her home city of 27 years.

Below, I speak with the Queen of Katwe director.

Alyssa Klein for Okayafrica: Thank you so much for making this movie. I just got out of it about an hour ago. I can’t even begin to explain how much I loved it.

Mira Nair: Ah that’s great. Thank you so much. It’s been a great response.

Hearing Michael Kiwanuka’s song play in the end, that just destroyed me.

He’s amazing. It was just the perfect song right from the very first cut. He’s really soulful. And he sang for us at the London premiere, which was such an honor.

That’s amazing. Why did you want to tell this story?

I have always been inspired by stories of people who are considered marginal through our societies. In their stories, I always find inspiration and resilience. Phiona’s story is so inspiring in terms of the fact it reminds us that genius is really everywhere. It was a chance for me to distill 27 years of living in Uganda, which I consider my home, to bring it to the screen in a way that it’s hardly ever seen, which is a portrait of everyday life, with its dignity and struggle and joy.

It is not what you normally [see], the stories [that come to you] from our African continent are stories of despair, or other people’s stories against the backdrop of some place called Africa. It was a way to correct that. And to bring something that I see around me. That everyday life, that extraordinary everyday life that is part of our life and needs to be seen.

How did you want to tell the story?

Exactly as you’ve seen it. Which is the radical thought that really it’s a mainstream Disney studio that has really supported a story of world cinema. Not a sugarcoated story. I wanted to tell it like you’ve seen it, which is that genius is everywhere, but it’s not a one-person show. It takes a teacher, like [Robert] Katende, to see that talent in Phiona. It takes him to nourish it. And it takes a mother like Harriet, who is confused by her daughter’s dreams, and then embraces them. And it takes a whole community of Katwe to harness Phiona’s intelligence. And that’s the story of Kampala, and the story of where I come from, and it’s beautiful to be able to bring that to your street.

What was Disney’s involvement like? It really is a film that strays from the Disney narrative of Africa that we’ve seen in the past. How did that impact the process?

As I joke with Disney, I’d say this is the first modern African film being made without a single animal in it. The idea of the film came, ironically, from Tendo Nagenda, Vice President of Disney, who is Ugandan-born, and who came to me with Phiona’s real story. Tendo was someone who looked for my sensibility, and preserved it through the studio process. As I began to shoot and send dailies they I think got more and more enamored by the insider quality of it, the truth but also the joy I suppose. And at its principals, it’s what Disney believes in, the aspirational story.

It’s a way of telling that is different. And that is really what I feel very happy about. It’s not sugarcoated, it’s really a prismatic way of telling the story. Everyone is complex. And it’s also full of fun, and music.

How involved were you in the music?

I was deeply involved, in all of my soundtracks. There’s two kinds of music—there’s the composed score by Alex Heffes and then there’s the afrobeat sound of the street, which was curated by my son, Zohran Kwame Mamdani. It’s inspired from the street, and what Ugandans are really listening to, the Nigerian pop, the old Ugandan sound and then the current Ugandan pop as well. The afrobeat serves as its kind of score as well.

And then there’s the orchestral classical score for the chess, like the counter-world to the real world of the street. Kind of that world of magic, or enchantment. Alex is fantastic. We recorded a lot of Ugandan traditional instruments, and even Madina, the actress who played Phiona, she sang as well. And we incorporated those sounds into especially the chess play.

It was very cool to hear “Skelewu” in a Disney movie. I didn’t see that coming.

It’s such a cool song.

Oh good, that’s written and sung by my son. And it’s really a hit song, everyone loves it. It’s such a cool song, I really like it too. It was composed for the movie, because that’s what Brian sings to sell salt. But it became so popular that we used it in the end credits and all of that.

Has it become popular in Uganda?

Mira Nair on set with Madina Nalwanga. Courtesy of Disney.

What are the politics of representation in telling African narratives like for you?

Well first off, this ain’t no story about a white savior. This is an actually true story that is from within, and about how we do with ourselves with a little help from our friends.

And I think that it’s a very welcomed story about a portrait of a modern Ugandan family. Like even Robert’s family, you have an African man and a wife, and not a dysfunctional marriage. You have the everyday seductions and challenges in a family life. That is not much seen, it’s hardly ever seen. For me it was really important that it ring superbly true. And also because I’m so familiar and so in love with where I live, that I can be also irreverent and affectionate about it, in terms of the use of slang, or style or just with how people actually are. That was very beautiful to be so free within that and sort of distill it to how you see it.

'Queen of Katwe’ is now playing in theaters. Go see it!