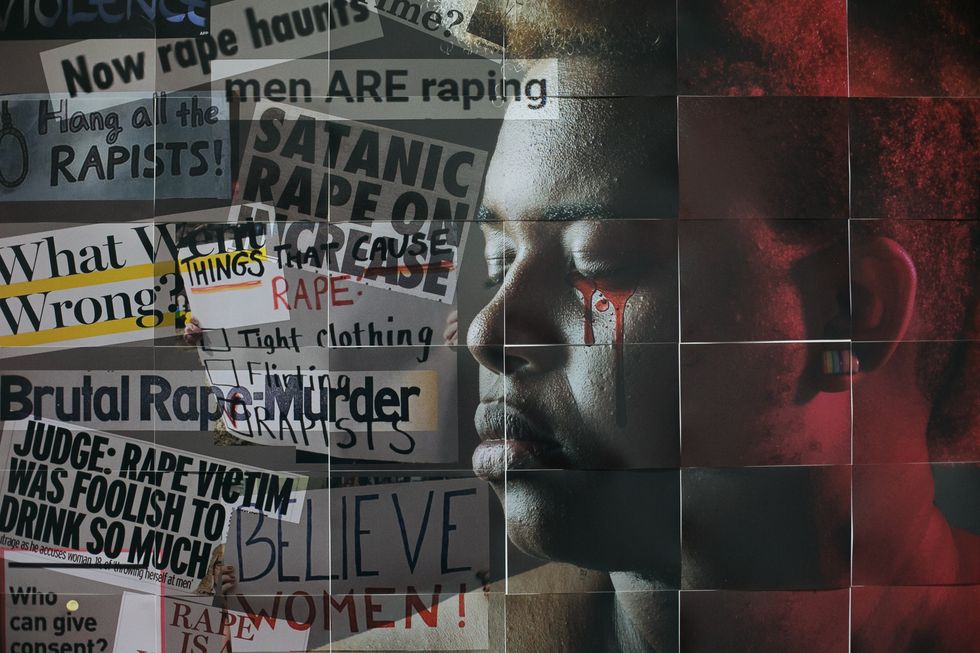 Mixtape Notes To The Shadows is a collaborative mixed media exhibition that uses art to show the complex process of healing.

How do you trap a shadow? How do you hold onto to something that slips out of your hands and appears when you step into the light? In Ghanaian society, which is predominantly patriarchal, issues like sexual violence and harassment are treated as shadows, suppressed and left to brood in the dark, unspoken and unaddressed. Despite the undocumented number of people who are tormented by these shadows, it's hard to confront something that society does not believe exists in the way that you experience it.

Dr. Sionne RameahNeely and Josephine Ngminvielu Kuuire, who are artists and survivors of sexual violence, decided to draw out these demons and shadows by leaving notes for them through art. Mixtape Notes To The Shadows, their collaborative mixed media exhibition and performance, was an open surgery on sexual trauma inviting witnesses as they chart their respective journeys to healing.

The show which opened on December 2 at Brazil House in James Town Accra, was a translation of the duo's respective experiences with sexual violence, into photography, video art, performance and storytelling. Dr. Neely, a womanist researcher and co-creator of ACCRA[dot]ALT and co-director of the CHALE WOTE Street Art Festival, teamed up with Kuuire, a concept driven photographer and digital artist, to sculpt a narrative bookmarked by video clips of Sandra Bland and dragon Nancy Reagan, post-it notes addressed to themselves and the shadows, digitally manipulates self-portraits, lucid recollections of childhood events and a dramatic portrayal of internal battles with truth and reality cataloguing a period of personal growth from childhood to young adulthood both in the United States and Ghana.

The technique of seamlessly blending art forms also mirrored the complexity of the healing process and how it might come from following different breadcrumbs but trusting yourself enough to beat a path. Dr. Neely herself describes it as, "a mix of storytelling, performance, monologue and video art. And the way that I thought about it was being able to recount the rape that happened in my childhood. But then I was thinking about how that thing is not isolated and it is connected to other moments of sexual violence and particularly racial violence. I grew up in the States those things go hand in hand."

Kuuire's fragmented self-portraits mosaicked against the white gallery walls, like post it notes on bulletin boards, opened the show. These stark images, some of many hands creeping from the edges of the frame, prompted Dr. Neely and her younger self, played by a young James Town resident, Isabella Adjei, to descend to the courtyard and begin the other component of the exorcism. She then recounted her personal encounter with abuse and the long and snaking road to healing bookmarked by depression, fear, physical illness, self-love and acceptance. The different art forms used to bind the narrative created multiple dimensions to experience a difficult story which flowed with sincerity and ease and gave a physical quality to a trauma that is often shackled in a mental space.

The power of work to resonate with other women and men who might have had similar experiences, but have been forced into silence, was one of the strongest points and greatest benefits of publicly acknowledging your own struggles.

"This story should have been told at least, eight or seven years ago," Dr. Neely says in a Q&A session moderated by Rita Nketiah after the performance, "particularly around conversations with family members, sister friends, two of my very close friends, one who was sexually abused by her father for about 10 years and she's still dealing with a lot of issues around that. Another who was abused by her brother growing up, and her family never believed her."

For this artistic collaboration, the sacred bond of sisterhood seemed to be the foundation for healing, or at least a step for the process to begin. "I was honored, humbled to be part, and downright emotional," says singer and songwriter Ria Boss, who gave permission for her original music, "Nirvana" from her recently released EP, "lo-fi // experiments vol.1," to be used in the project. Boss also flipped the hook of Boris Gardener's "Every Nigga is a Star" to a spine-chilling soulful interlude titled "Every Woman Is A Star" for one of the scenes in the performance.

"Like this is exactly what I create my music for, for healing, for sharing in that healing," she tells me after the show. "It meant I was part of a community that understands what it means to be transparent about trauma. It's probably by far one of my best collaborations with another artist. And through this I've developed even stronger sisterhood. Tighter bonds, a supportive community."

For all the women involved in the project, art is their most expressive outlets and the best way to own their experiences. "We wanted it to be about us, we wanted to share our own stories," Kuuire says after the show. For her this was the very first time she had ever shared her experience with sexual violence with anyone. "The first time I almost got raped, I told my ex-boyfriend at the time and he blamed me. It took a lot of being with myself and knowing what I was feeling and exactly where I wanted to be. We always forget to take care of ourselves," she adds. This public display of the healing process and reclamation of the narrative was especially poignant as many women on the digital space over the past few weeks continue to come out and share their experience of sexual abuse and trauma through hashtags like #MeToo.

The work confronts rape culture and the silencing of the stories of survivors by making a strong case for the need of people to learn their unique routes to healing. For some it maybe western pharmaceuticals, natural medicine, or faith based practice, but each victim should develop a system for confronting the shadows and banishing them. As Dr. Neely puts it in the Q&A: "It was really difficult to tell to tell that story by itself. I felt like I had to really wrap it as comprehensively as possible. You know, these things they are deep-seated inside, at it is like if they don't come out, I don't want that to develop into a tumor or a cancer. And these are the consequences of us not telling our stories, not being counted. No, your story matters, you're the only person who is like you. So you have a right to share."

Mixtape Notes To The Shadows transmitted a wave of courage and bravery, compelling the attentive audience to rethink sexual trauma, its impact of mental health, and the various unique paths you can all find to healing. The project, a public education in the vocabularies of healing will be expanded to include various artistic interpretations of unique routes to healing from other women artists in 2018. However, the photo exhibition will remain open till December 12 at the ACCRA [dot] ALT space in Brazil House in Accra.