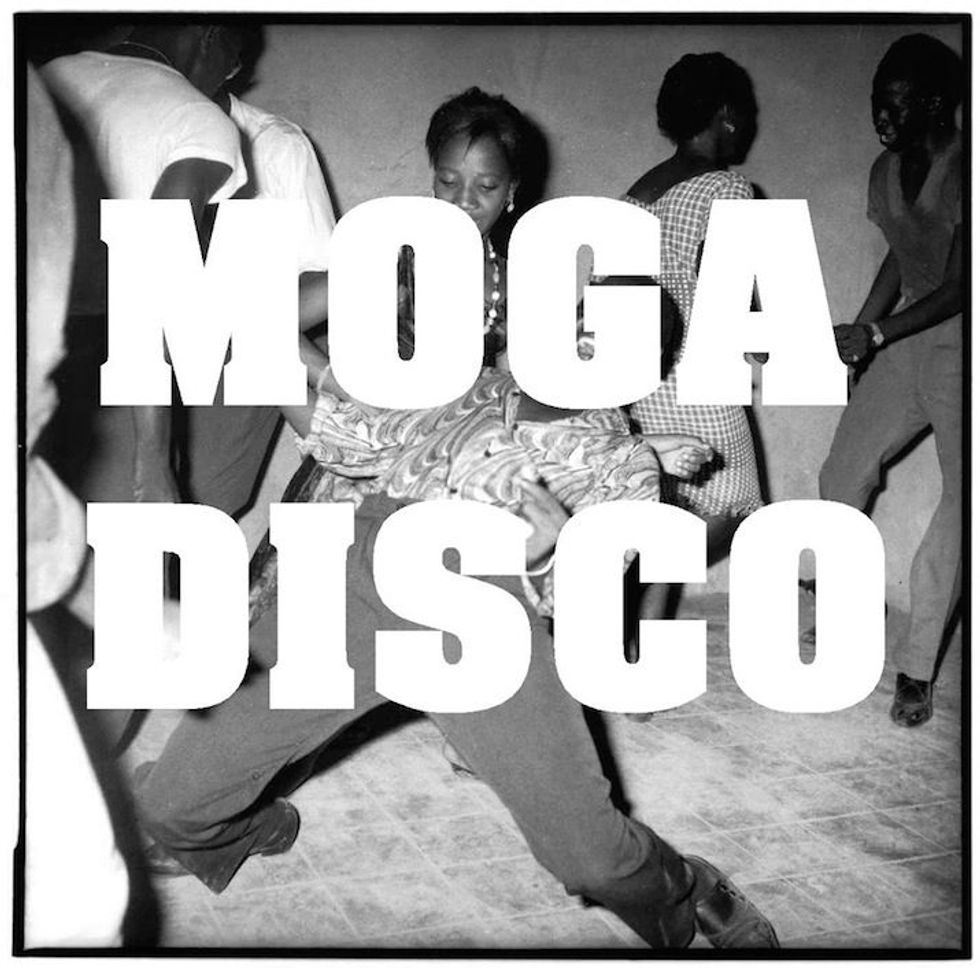 Since their first event in 2013, MogaDisco have been offering up their twists on old school songs across the continent to music fans in London and Manchester. Following their recent show at Late at Tate in London, Okayafrica contributor Seonaid Weightman caught up with the DJ quartet to find out more about their inception and what to expect from MogaDisco in the future.

Seonaid for Okayafrica: How and why did you all decide to form MogaDisco?

MogaDisco: The idea started in Manchester whilst three of us were at University. The club scene was dominated by Electronic music and we wanted something different. Nobody was playing full sets of African music; Mr. Scruffwould slip in a bit of Fela Kuti here-and-there, but essentially, other than live acts on tour at Band on the Wall, there was a real lack of retro African music. We were playing this stuff in our bedrooms and wanted to see if people enjoyed it as much as we did, so we had a go. After two successful nights under the guise of "JùJú Music" we decided to continue the project back in London. We recruited our fourth member and changed the name to MogaDisco.

OKA: What made you decide to play Afrobeat classics?

MogaDisco: In short, it’s great dancing music. The horns, rhythms and guitar riffs make for an infectious combination. Afrobeat feels familiar to Western audiences through its similarities with the funk and soul of James Brown and co. (the lyrics are often in pidgin English) but the main point of difference is the West African percussion. Consequently the tracks play way over the traditional four-minute mark, so at times sadly we have to cut them short. We play lots of other genres too, but Afrobeat is often the one that people recognise and are probably most comfortable dancing to. I think you’d be hard pressed to find someone who could stand still to a Tony Allen drumbeat!

OKA: Where do you look for new tracks and inspiration for your sets?

MogaDisco: We combine both the traditional route of record shopping with internet searching. Nothing beats vinyl - the best medium for our collections since most of it was recorded in that era - but without heading to Africa "digging" for the records we want can be tough. In truth it would be difficult to have such a scope of music without the internet, which is a great tool for research. There are some incredible blogs out there and people are uploading MP3’s of rare tracks that would cost hundreds of pounds to buy. Choosing a track is dependent on many variables such as location, time of day, or even the time of night. We’re equally at home relaxing to the Kora music of Toumani Diabate as well as jumping up to some frenzied Soukous Stars bangers.

OKA: What is it about Moga events that attracts people, particularly those who maybe aren’t familiar with the music you play?

MogaDisco: It’s hard to say but maybe some people are a bit bored of the current nightclub scene, which can get a bit monotonous, with a lot of DJs doing a similar circuit; Time Out’s review of our first night in London went as far to say that you people should "leave your generic 4/4 ideals at the door" when you step into Moga! Since we play quite sporadically we’ve always got something new to share, while word of mouth also plays its part. Earlier this year an old Ghanaian guy came across our night by accident. He was walking past the club in Deptford and heard some Highlife music; when he realised we were playing Alex Konadu to an audience of twenty-something’s he couldn’t believe it! There’s probably some novelty in the location too. We’re all from Deptford but it’s not usually a big draw for clubbers so it’s funny seeing people travel south of the river just for MogaDisco.

OKA: What’s been the highlight for you guys so far?

MogaDisco: There have been quite a few highlights; we’ve accomplished quite a lot seeing as we’ve been only been around for two years. Most recently we played a little set for the Late at Tate series at the Tate Britain which was an honour. Also, last year we curated a live show at The Albany theatre, which was a new experience. But, the standout moments are mid-set during a late DJ session. Club nights are always exciting because we get the best of both worlds. We never know exactly what each other is going to play so there are always surprises during the course of the night… when the crowd is going crazy, you’ll usually find one of us going crazier!

Late at Tate by Mogadisco on Mixcloud

OKA: How would you like to see Moga develop in the future?

MogaDisco: There is a lot of scope. We’d like to play some festivals next year and hopefully go abroad. It’s always nice to visit new places and introduce people to different music. We’ve a few things planned on a slightly more academic scale; we’re interested in the music beyond just the sound and are currently researching into one or two genres to learn more about their origins, influences etc. We will definitely do another live event seeing as the Home Office tried to ruin our last one by rejecting Orlando Julius' visa. Live music is the original format of the music we play so it’s important for us to engage ourselves and audiences with this.

OKA: What can we expect from Moga in the next few months?

MogaDisco: In London we are hosting the top floor (Room 2) of Bussey Building, Peckham, as part of the Balamii event on 25th July. On August 2nd we are supporting Awesome Tapes From Africa in Manchester at Soup Kitchen, and fingers crossed we’ll also play Brixton Splash this summer. We’re also plotting another outdoor event for the back-end of summer as this gives us a chance to play more down-tempo music, which is otherwise restricted to our Moga mixes.

For more info on MogaDisco and details on their upcoming events check out their website and facebook page.