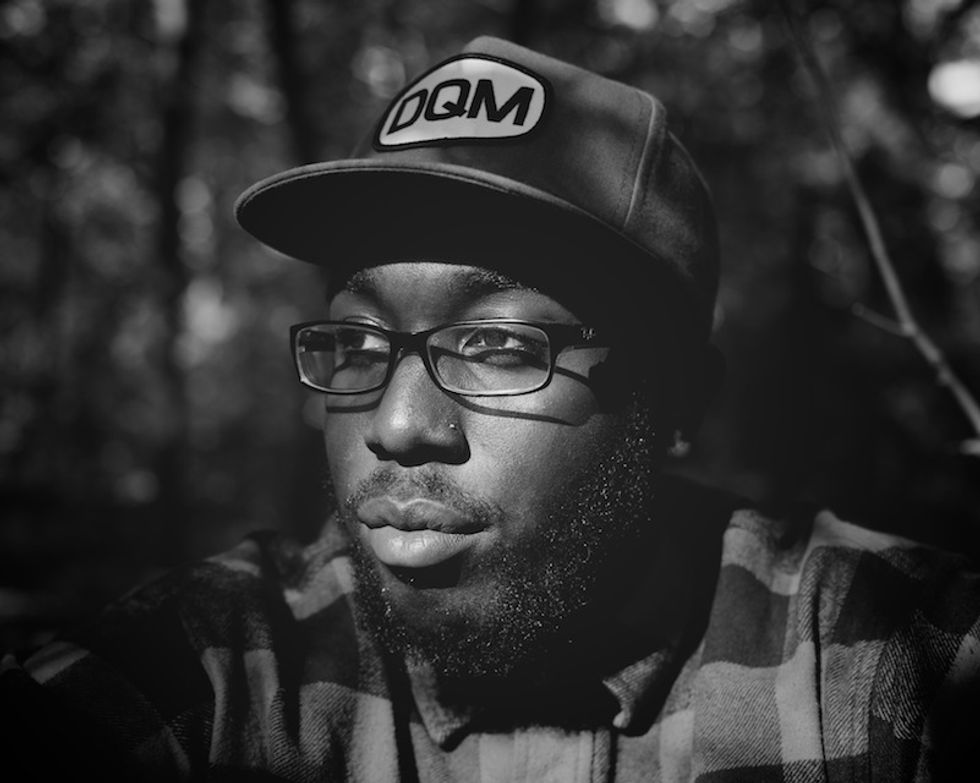 It's been a minute since the OKP fam began showing love to MoRuf, the Jersey native that runs with the likes of Jesse Boykins IIIand Melo-X in his hip-hop and art circles. When we caught wind that the Romantic Movement-affiliated emcee was brought up by Nigerian parents, you bet we had questions— but before we got to talking about roots, we had hours of rainy day flow and psychedelic views to revel in. Check out our conversation with MoRuf below and scroll on for our spotlight on the young rapper's already promising music history.

OKA: Could you tell us a bit of background on where your family is from?

MoRuf: Both of my parents came out to the states from Nigeria in the late 70s with hopes of bettering their lives. (Mom's from Abeokuta, Father from Lagos.) They did an amazing job, raised four children. We're doing well for ourselves, thanks to them. My parents and three sisters are literally my role models.

OKA: Do you have family currently in Nigeria? Have you been?

MoRuf: I actually do. Grandmother on my mother's side, aunts, cousins. I haven't been to Nigeria since I was about two. It's been a while. I promised myself after I graduated from college, I'll make my way back. So soon enough I'll be out there. I actually got a chance to travel to Africa last Summer with the Romantic Movement family, Equatorial Guinea to perform and visit a few orphanges. [It was a] Life-changing experience, there's no place like home.

MoRuf: I grew up listening to alot of R&B, me being the youngest of four children and the only boy, I had no choice but to listen to what my sisters were listening to. SWV, Jodeci, Silk, R. Kelly, Escape, Biggie, Anita Baker. My father use to blast that Sunny Ade every morning. Sunny Ade is the OG with Nigerian tunes. It was a good mix. As I got older and actually had money to purchase music that's when i got more into hip-hop. Saving up my lunch money to buy bootleg CDs. It's funny when I think about it. I wouldn't eat lunch so I could buy DJ Clue's mixtapes.

OKA: Was there much of a Nigerian presence/community in New Jersey when you were growing up?

MoRuf: Being that my cousins all lived around me there was def a huge presence of the culture. Growing up in a Nigerian household, you have no choice but to feel the presence. My parents were very strict, and believed in instilling Nigerian values within the children. Knelling down to your elders when greeting them, Nigerian parties, cooking etc. Nigerian values definitely were a huge part of my upbringing. I truly appreciate it that much more as i get older.

OKA: Where does hip-hop's Romantic Movement fall in the spectrum of history? Are you guys a successor to the Harlem Renaissance? Hip-hop's early days?

MoRuf: I would say so, the Romantic Movement is a group of creative individuals who create from the heart, who arent afraid, just honest and organic vibes. I miss when music was about the art. I feel like in more recent times it's getting back to the basics. As far as with the Romantic Movement I feel like it's something unique from what's being put out now, Jesse Boykins III, Mara Hruby, Chris Turner, MeLo-X, all progressive innovative artist. It's amazing to be surrounded by indivudals who you're inspired by. So yes it's somewhat of a rennaissance in a sense. An honor being apart of it. Bless Up to the fam. (Saydaat!!)

OKA: Any Nigerian emcees you'd be interested in collaborating with?

MoRuf: A few years ago a good friend of mine put me up onto Nigerian rapper M.I. (most incredible), Wizkid is killing it, still remember listening to 2face back in the day. Def would love to collab with some Nigerian artist. Think that would be super dope.

OKA: Any music we should be looking forward to from MoRuf?

MoRuf: Yes indeed. I'll be releasing my second solo project Shades.Of.Moo this fall. Im really excited to share this body of work with the people, one of my most personal projects ever. It's been a while, but it's finally done, so def be expecting that this fall. Bless Up to OkayAfrica, and everyone supporting the music&movement. It's appreciated, know that! Love.Over.Everything #LOE!

Head here for MoRuf's releases. Below are five tracks we've got on repeat.