A Letter From Mr. Burundi: "How Can We Talk About Political Dialogue When Innocent Civilians Are Dying?" 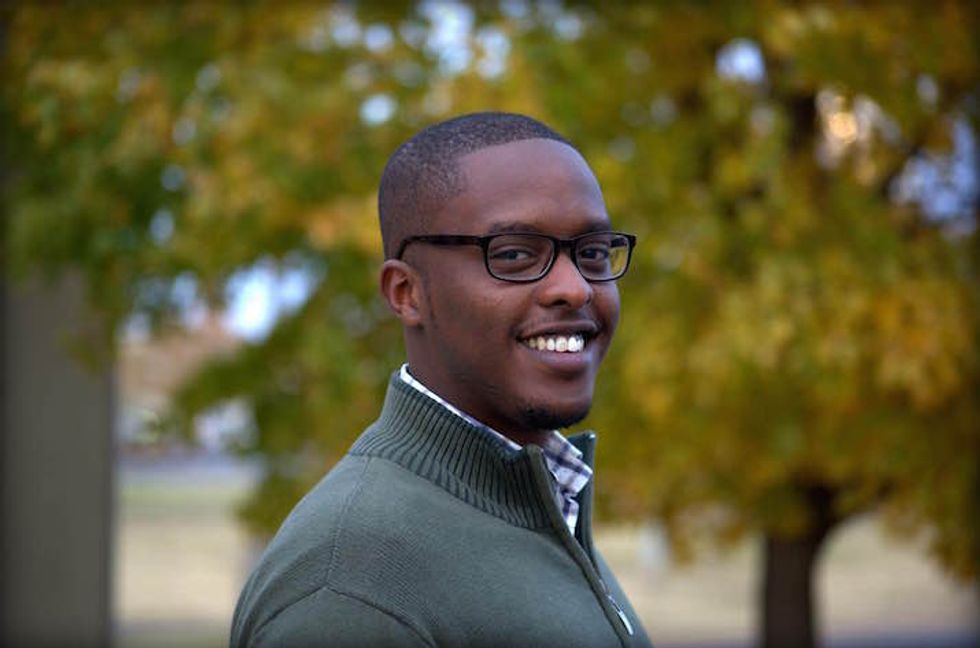 Karl-Chris Nsabiyumva, known to Twitter as Mr. Burundi, makes the case for international intervention in Burundi in an op-ed for Okayafrica.

Burundian writer Karl-Chris Nsabiyumva, 28, known to Twitter as Mr. Burundi, is currently living in exile. We interviewed him in October for an article on how Burundians are using Twitter to evade censorship during the crisis. In the op-ed written for Okayafrica below, Nsabiyumva makes the case for international intervention.

A few days ago a friend of mine asked me to help her with a school paper she was writing on the Burundi crisis. I laughed. A year ago, I wasn’t the person you would go to to discuss Burundian politics. Today, I’ve given interviews, participated in televised debates, been quoted in articles as an “opposition activist”, quadrupled the number of my Twitter followers, and been forced into exile—all because of my opinions, which I personally do not take very seriously.

It’s crazy how much can happen in just one year.

My friend wanted me to suggest a viable solution for the current crisis. My answer was, I don’t know! I don’t think anybody does. If you had asked me this question a few months ago—before things got as out of hand as they are today—I would have probably said that Nkurunziza had to resign. Then you would have asked me who should replace him, and I would have answered, again, I don’t know! I don’t know because there is nobody out there who seems willing and able to do a better job than him, and the priority right now—at least for me—is the safety of citizens.

I’m writing this article after reading that Gabriel Rufyiri, a famous Burundian activist, may have suggested “ethnic alternation” (a Hutu, then a Tutsi, and then a Hutu, and then a Tutsi, etc.) at the Presidency, as possible solution for the crisis. Like how further from the point of everything could anyone be? This is 2015! Who cares whether the President is a Hutu or a Tutsi? That is so 1993! All we want is good leadership! Anyway…

I may not know much about political crisis resolution tactics, but I know one thing: people are dying. And on both sides of the bloody third term: pro and anti. They have been dying since the first day of the protests, and most of the time, those who die have nothing to do with the political games being played. So many have died that we’ve lost count. We now rely on “estimates”: 249 was, I think, the official number a few weeks ago, not including the many dead bodies that have been found on the streets of Bujumbura, between then and today.

Yet, when we’re discussing solutions, we rarely talk about realistic ways to stop the daily loss of innocent lives. The Government and the opposition spend their time throwing the blame at each other. It’s as if there aren’t enough images, videos and testimonies of police and other government forces killing defenseless citizens, including children; or we’re going to believe that the General Adolphe Nshimirimana (and others) was killed by the Government. The “Sindumuja” use self-defence (against a government that has been “gunning them down”), but there is a big difference between protecting yourself against, and attacking someone. I’m just saying. Anyway, this isn’t the point of my article. I’ve had my fair share of the blame game. Meanwhile, the International Community is busy issuing statements.

My point is, before talking about political solutions, power deals and what not, can we talk about protecting civilians? How is it that the world is talking about the threat of another genocide happening in Burundi, yet nobody is sending troops to make sure the pro and anti-term militants don’t finish each other before it happens?

It is clear that the Government of Burundi is incapable of protecting its citizens. In fact, it’s doing the opposite. It is also clear that elements loyal to the opposition are armed and executing attacks against their “enemies”.

To stop the killing, the world will need to send in a buffer. It’s been done in Eastern DRC, in Somalia, in the Central African Republic. Heck, it was even done in Burundi between 2003 and 2006, to prevent clashes after the Arusha Peace Agreement was signed. One of the other purposes the foreign forces served was to “protect” opposition leaders who had returned home from exile. Yet today, the same leaders (they run the country now) claim they can ensure the security of those who opposed them. I laugh.

How can anybody think that political dialogue is possible when civilians are still dying, both at the hands of a government supposed to protect them, and an opposition that supposedly speaks for them? Besides, everybody knows that political negotiations take forever: are we going to wait until they’re over to think about protecting people’s lives? Is that how it usually works?

Or is there a criterion we haven’t yet met to deserve protection? Is there a minimum required body count, before we can request help to prevent more deaths? Maybe there is and I don’t know. I told you I don’t know a lot of things.

Karl-Chris was born and raised in Bujumbura, Burundi. An economist by training, he is engaged in community health and development through a non-profit he co-founded. In his free time, he loves to tweet and write about the ups and downs of life as a Burundian and in Burundi, with a particular sense of humour. Follow him on Twitter and visit his blog: The Chronicles of a Third World Elite.