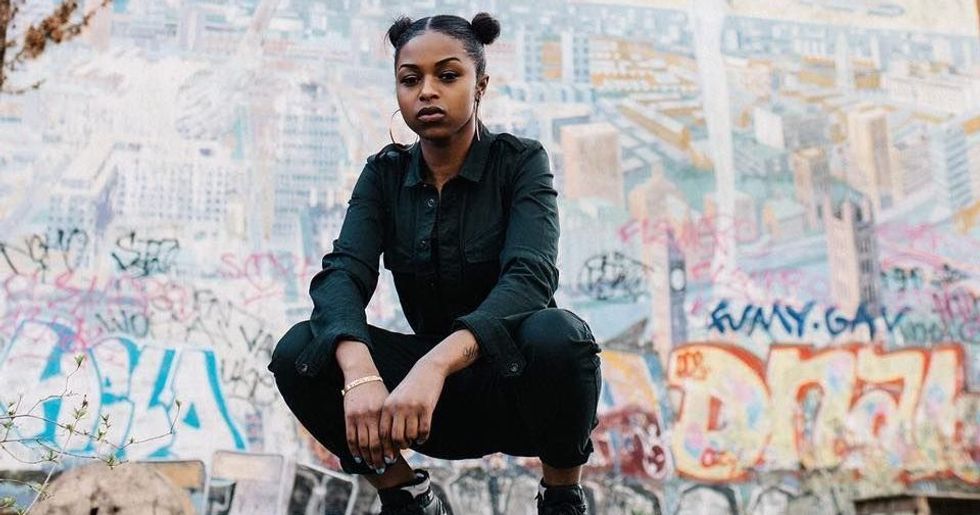 Nadia Rose's impressive debut album 'Highly Flammable' is proof that she might be the best new rapper coming out of the UK.

The eight songs on Nadia Rose’s debut Highly Flammableare like a pack of firecrackers, each of varying strength and spark-points, but all brimming with boisterous belligerence.

“U Know What” is packed with double entendres like “I get brain, I get advice." While not too impressive in isolation, when the lines are tightly packed along with others and feverishly rapped over a jittery London-meets-Caribbean garage beat, the result is stunning.

By now the phrase 'too hot to handle' is played out (true as it might be in regards to Rose). So the numerically-addled abbreviation in album track "2H2H" just about makes the staleness less noticeable on a track that has many parallels to Missy Elliot's work with Timbaland.

Elliot’s influence is in fact that of a presiding spirit over Rose’s musical project as a whole, particularly relevant here is her sophomore album Da Real World.

The album's most memorable single “She's a Bitch” packs a truck-load of attitude and was, as recent as 1998, considered very full-frontal and indeterminately feminist in its ownership of the derogatory word.

A variant of the looped violin that defines the beat on “She's a Bitch” is heard on Rose’s “2H2H,” but not one to get tamped down by influence, Rose’s wordplay, always fun and clever—for instance “you can bring the fire but you can't match this”—is the lime juice that boosts the familiar flavour of Missy Elliot.

Elliot’s abiding influence continues into the first single “Skwod.” It's more apparent in the video, in which Rose strides a London street, eyes set on the camera and not the changing formation of dancers trailing her from start to finish, and with whom she keeps in lockstep—all in what appears to be one take.

The superstructure of bright costumes, hyperactive dancing, exuberant beats might have been drawn from the Elliot-sphere, but the motoring mechanisms of clever wordplay, versatile delivery and charm is all Rose’s. A video of her freestyling over alternating beatboxing on DJ Semtex's BBC 1 Radio 1Xtra show is evidence of her talent in elemental form.

Here her verbal dexterity and ability to switch flows, sometimes instantly, is seen in close focus and away from the restrictions that standardised songwriting which, for good or bad, forces an artist to adhere to settled structures and album formulae.

That aside, the simple image of a dope female MC spitting bars to beatboxing by another female, who is also a producer, is striking for its rarity as well as being a testament to either’s talents.

If the comparisons to Elliot seem to be taking away from Rose’s actual talent, let me be clear, this is not the intention.

Rose, who is British-Ghanaian, also succeeds at adding her own dancehall inflections to her tracks, which she does convincingly on “U Know What” and "Tight Up." The latter samples the chorus from Red Rat’s “Tight Up Skirt” and thickens it for high-impact with a hard-hitting bass.

By the eight song “Murder,” on which the 23-year-old Rose attests to her ability to kill a beat, the point seems redundant as we have by then had a blistering run of seven songs, the plasters still fresh.

Rose maybe be the full flowering of Elliot’s proto-feminism, but in Highly Flammable she has improved on it with a narrative and execution that is all hers.